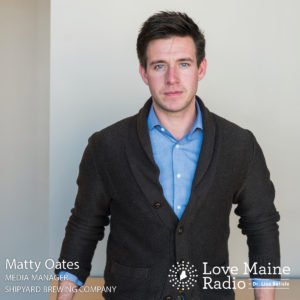 It took over 70,000 nautical miles—and some wayward adventures in between—before Matty Oates finally put down roots in Maine. At the age of 18, he began traveling the globe and taking on odd jobs (like standing in police lineups for cash in Scotland) to make his way, finally stumbling into the world of Tall Ship sailing. He eventually moved to France in 2007 to join and then run the deck of the iconic 1911 racing yacht Mariquita, widely considered to be one of the most beautiful sailing yachts in the world. In 2015, he saw his brother, Kevin, doing amazing work with his own nonprofit, the Maine Youth Rock Orchestra, and decided to return to the USA. Portland’s ever-changing, vibrant scene was the magnet that drew him in, and soon after arriving he was brought aboard as the program director of Tall Ships Portland, a local 501c3 organization dedicated to youth education at sea. After a year-and-a-half, he left to join the marketing team at Shipyard Brewing Company as media manager. Outside of Shipyard, he is a partner with MMP, a data-driven marketing firm that specializes in omni-channel media planning, search engine marketing, and social media strategies with partner Chris Marine. When away from a computer, he enjoys standing sideways on any sort of board, and as a classical violinist, he publishes a podcast with his brother called Bach to Bock in which they discuss classical music and beer, breaking down barriers and getting his generation reengaged with this fascinating era of music.