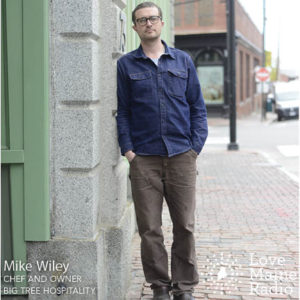 Though he holds a bachelor’s degree in literature and creative writing from Colby College and a master’s of rhetoric from the University of Colorado at Boulder, Mike Wiley always felt called to the kitchen. His food and hospitality education began early: as a child, he frequently cooked alongside his mother and later took a summer job as a busboy. When Mike moved west to Colorado, he spent several formative years working in various restaurants to support his ski and study habits. Ultimately, he decided to pursue a career in the culinary field and moved back east in 2010 to join the team at Hugo’s, an enduring Portland standby that had evolved into a beacon of New England cuisine under the direction of chef/owner Rob Evans. After two years working under the award-winning Evans, Mike and his then colleagues, Andrew Taylor and Arlin Smith, purchased Hugo’s and established Big Tree Hospitality. The group has since opened two more restaurants, Eventide Oyster Co. and The Honey Paw, to regional and national acclaim. In 2017, Andrew and Mike won James Beard’s “Best Chef: Northeast” award. They were previously nominated in the same category in both 2014 and 2015. These days, Mike has a hand in the culinary direction of all of Big Tree Hospitality’s properties, as well as the group’s continued evolution and growth.