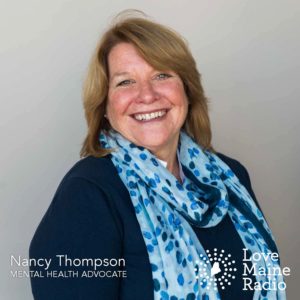 Nancy Thompson is an insurance agent who lives in Cape Elizabeth. She has been married to Tim Thompson for 36 years. In 2004, she lost her middle child, Timmy, to suicide at the age of 18. Timmy took his life as a result of depression. Since that time, both Nancy and Tim have spoken publicly about their loss in the hopes of saving lives. They urge those with emerging mental health issues to not take no for an answer and to push harder for services. They also urge people to not be afraid to speak about their illness so they may be able to have others help them. Nancy has also been an active member of the Junior League of Portland for 21 years and served as president in 2004. She also served for seven years on board of the Center for Grieving Children board and served as president of the board in 2012-2013.