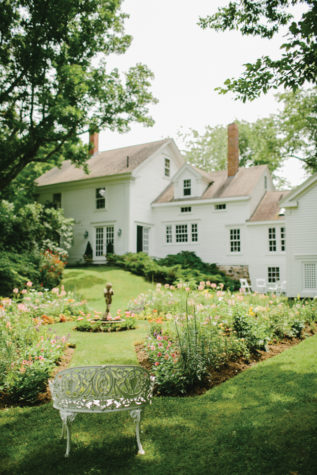 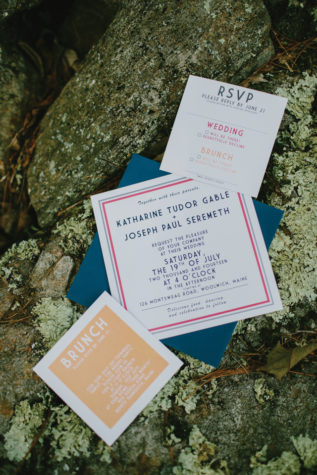 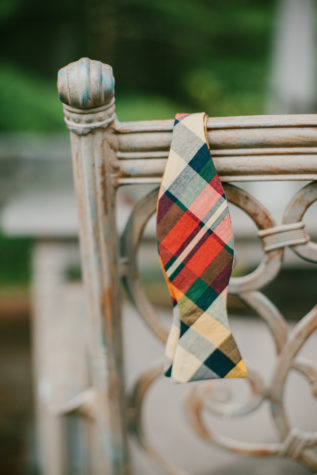 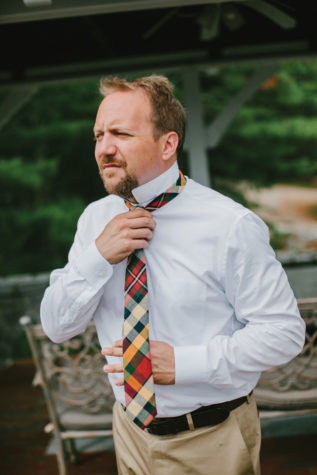 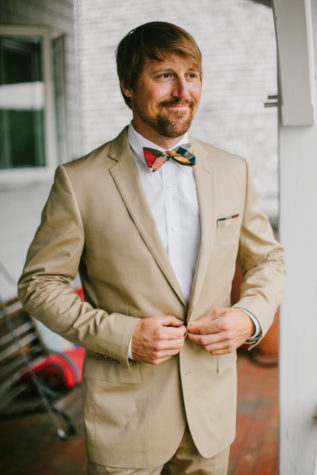 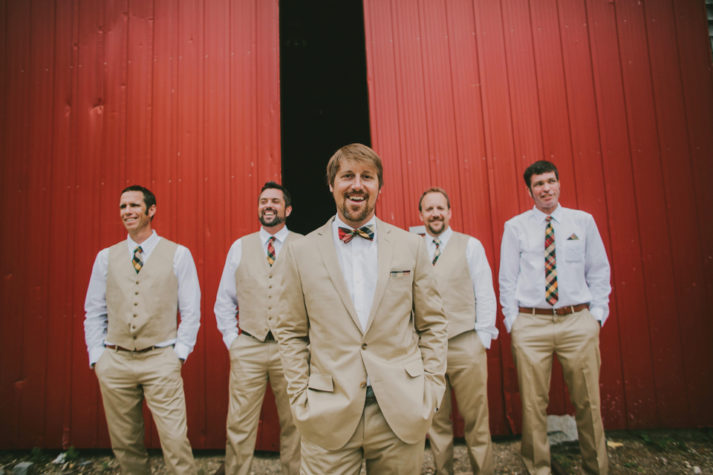 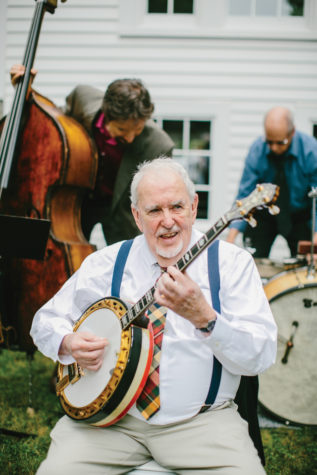 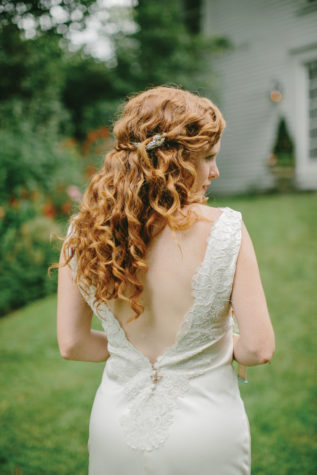 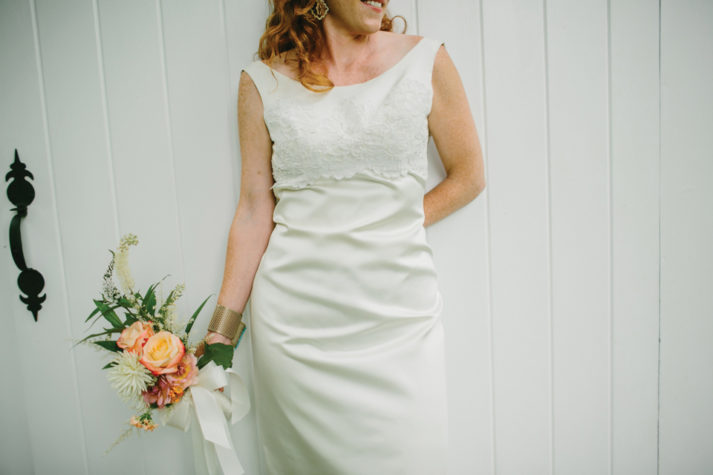 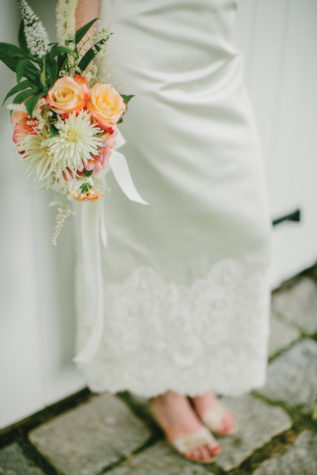 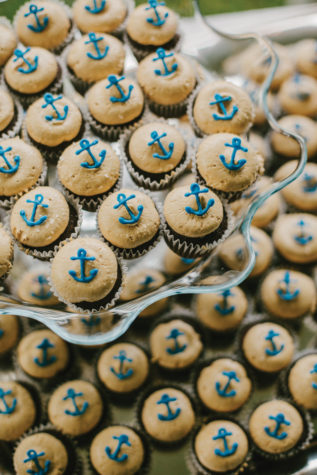 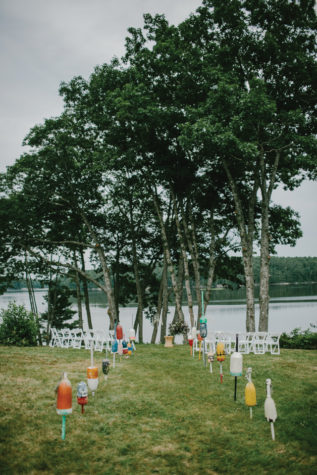 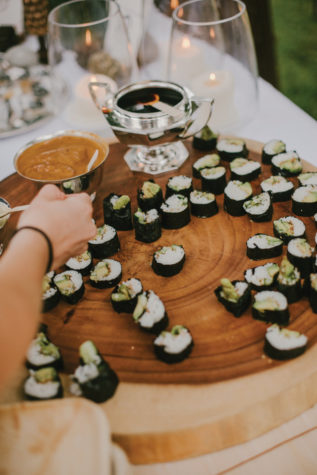 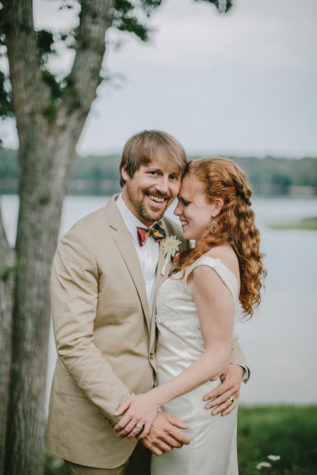 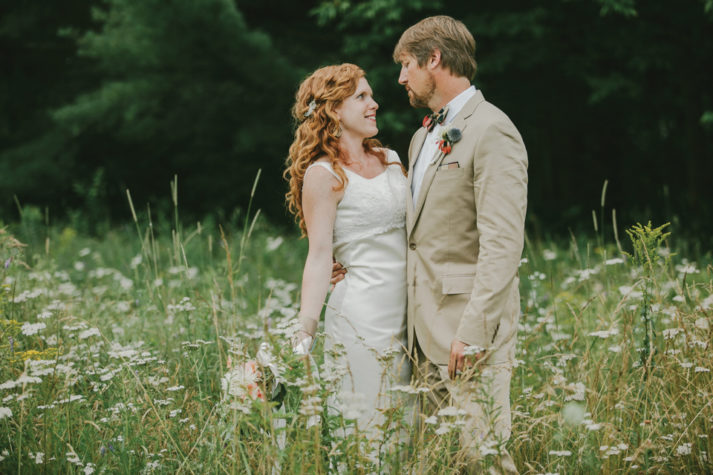 “We met at a pig roast right when I moved back to Maine,” says Kate. “We became good friends, sharing a passion for both design and boats.” The two remained friends for a couple of years before they began dating. Once together, things started moving fast—within a month, they moved in together and bought an old ’72 Pearson 30-foot sailboat to restore. For her birthday, Joe bought Kate a season’s pass to Sugarloaf and Sunday River. On Christmas Eve they went to Sunday River to get Kate’s pass. While she was having her photo taken, Joe secretly “photo bombed” the picture, standing over Kate’s shoulder holding an engagement ring. When they handed her the new pass, Kate was slightly confused albeit pleasantly surprised, seeing the ring in the picture, and then turning around only to find Joe on one knee.

“Every moment was special,” says Kate. “We had over 200 people there and each person we saw was like a gift added to the day.”

FOOD: They wanted it to be casual but elegant, so they elected to serve tapas and passed hors d’oeuvres at the reception. Small Potatoes catering thought of every detail, including passing out moist lavender-scented hand towels for the hot day.

PRE-CEREMONY: When people arrived at Kate’s Dad’s Victorian farmhouse for the pre-ceremony cocktail party, Joe’s stepdad’s ragtime jazz band, the New Black Eagle Jazz Band, played in the gardens. Their sailing inspired specialty cocktail “The Over Early” was served. Joe was greeting guests, but Kate was in the master bedroom peering down into the garden. “I could see everyone but no one could see me. It was amazing to see all of our loved ones meeting each other and, of course, I got a sneak peek of Joe looking dapper. It was like a scene from an F. Scott Fitzgerald novel.”

ATTIRE: On the day they were planning to shop for dresses, Kate’s mom pulled out the dress that she had worn at her own wedding in the 1960s. “I tried it on, and the brainstorming of how to redesign it began.” Adjustments were made—her seamstress changed the neckline, opened the back, and used lace from her mom’s veil. Joe wore his favorite madras tie of his dad’s from the 1960s and a fashion designer friend arranged for the fabric to be recreated and then made into bow ties, ties, and pocket squares for the groomsmen.