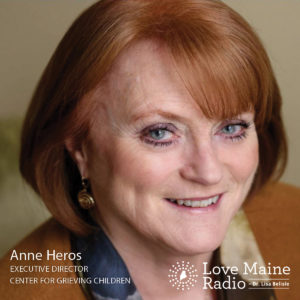 Anne Heros serves as executive director of the Center for Grieving Children. She was appointed to that position in July 2001 after serving as the Center’s outreach director and education coordinator for four years and facilitating the Center’s Bereavement Peer Support Program as a volunteer for three years. As executive director, she spearheaded a capital campaign that began in 2005 and raised $2.8 million to provide a permanent home for the Center’s vital programs. In 2011, she oversaw the Center’s expansion of its bereavement support services into Maine’s York County, establishing a satellite Center site in Sanford. Additionally, she was among the founders of America’s Camp, a national summer camp provided a network of grief support “buddies” in its service to children and siblings of firefighters and police who died on September 11, 2001. In her career at the Center, she produced a significant expansion of the Center’s program to train providers and volunteers nationwide in the volunteer peer-support model to help grieving children and families. Locally, she has guided the Center’s leading role in providing grief support services to schools and civic associations; for example, the Center’s Multicultural Program works with Portland middle schools to support refugee and immigrant students. As a founding member of the National Alliance for Grieving Children, she continues to participate on its Advisory Council and help shape its annual national symposium. She has presented at many national conferences on the topic of grief and trauma, and she was the recipient of the 2008 Advocacy Award from the New York-based National Foundation for Grieving Children, Teens, and Families. She has served on the cabinet of the United Way of Greater Portland, and she also been a member of the Auxiliary to Mercy Hospital since 1994, including two years as president. She continues to be a member of the Board’s Compliance Committee.