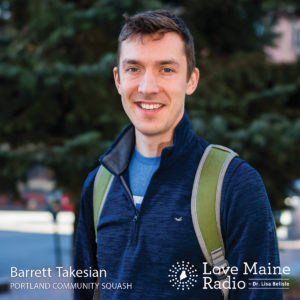 Barrett Takesian spent his childhood in Southwest Harbor and his teenage years in Boston. When attending Bowdoin College, Barrett studied economics, captained the squash team, and served on the residential life staff. After graduating in 2012, Barrett moved to Portland, where he worked at Unum and volunteered at Big Brother Big Sister and YMCA. Through his volunteer work, Barrett created an urban squash and education model, and he left insurance to commute to an emerging program in Lawrence, Massachusetts. Over the next two years, he drove about 75,00 miles. He learned the inner workings of the urban squash and education model in Lawrence, and he built the framework to bring a program back to Portland. In 2016, he began working on the Portland Community Squash (PCS) program full time, intending to marry the urban squash model, local school programs, and broad community access under one roof. On January 10, 2017, PCS opened a community squash and education center at 66 Noyes Street in Portland, which was formerly the Shaarey Tphiloh Synagogue. The facility filled adult and youth offerings within the first six months of operations, and the program is positioned to provide over $100,000 of financial aid and transportation assistance in the 2017-2018 school year. Takesian currently serves as president and executive Director.