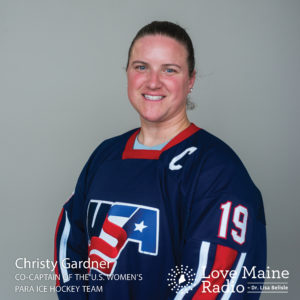 Christina “Christy” Gardner is a 35-year-old retired Army veteran. She grew up in Auburn, but spent a lot of her childhood in New York City. She played sports growing up and loved to be outside, but was also rather artistic. After high school, she attended Long Island University in NY and earned a degree in photography, but had signed up to leave with the Army as soon as she graduated. She served as a military police officer and was injured overseas in 2006. She spent a year and a half rehabbing on active duty and three and a half years rehabbing at the VA Hospital. Due to her brain injury, she started back over at the third grade level to re-learn English, grammar, and math. After being discharged from the rehab programs, she was able to live on her own again and started participating in adaptive sports. She is now co-captain of the U.S. Women’s Para Ice Hockey team.