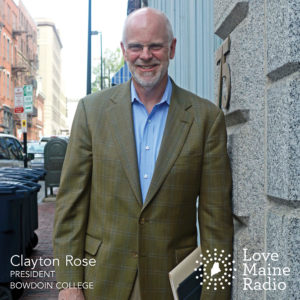 Clayton Rose is the fifteenth president of Bowdoin College. Originally from San Rafael, California, Rose earned his undergraduate degree and M.B.A. at the University of Chicago. In 2003, following a highly successful twenty-year leadership and management career in finance, he enrolled in a doctoral program in sociology at the University of Pennsylvania to study issues of race in America. He earned his master’s degree in 2005 and his Ph.D. with distinction in 2007. Prior to Bowdoin, he served as a faculty member at Harvard Business School, where he taught and wrote about the responsibilities of leadership, managerial values and ethics, and the role of business in society. He is a member of the board of trustees of the Howard Hughes Medical Institute, the nation’s largest private supporter of academic biomedical research. Rose and his wife, Julianne, have two sons, Garett and Jordan, a beautiful new granddaughter, Petra, and a black lab named Emma.