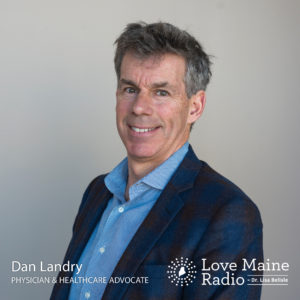 Dr. Dan Landry trained and worked within the Harvard system in Boston as a pediatric anesthesiologist prior to joining Spectrum Healthcare Partners in 1994. Since arriving in Maine, Dr. Landry concentrated his practice on the care of both children and adults with cardiac disease. In addition to his clinical duties, he became active in practice administration and health policy. Over the past 15 years, he managed the largest division within Spectrum and served as president and chairman of the board. In addition to his role within Spectrum, he sits on numerous healthcare-related boards and advocates for healthcare reform, and he is a policy advisor during the governor’s transition into office. On January 1, he gave up his administrative positions within Spectrum Healthcare Partners to focus on his clinical practice and advocate for healthcare reform within Maine and throughout the United States.