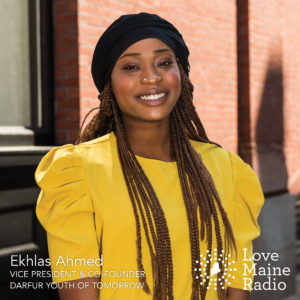 Ekhlas Ahmed is a refugee and activist from Darfur, Sudan. She fled with her family to Egypt and lived there for two years before being resettled in Portland, Maine in 2005. She has since graduated high school with honors and earned a degree in sociology with hopes of helping resettle other refugees. She is the vice president and co-founder of Darfur Youth of Tomorrow, an organization raising awareness in her community of the violence and needs in Darfur. The Darfur Youth of Tomorrow has taken Ahmed to a number of places, most recently to the Kennedy Center in Washington, D.C., where she was invited to speak about the genocide by the UN Refugee Agency and read a poem about her homeland. Ahmed teaches English at Casco Bay High School, her alma mater. She also runs a program called Make It Happen, which prepares multilingual students for college. She is writing a book called The Bridge Between, an autobiography in poetic form to share her experiences and raise awareness about Sudan.