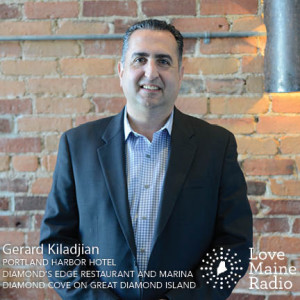 Gerard Kiladjian is the general manager of the Portland Harbor Hotel, Diamond’s Edge Restaurant and Marina, and the newly opened Inn at Diamond Cove on Great Diamond Island. His passion for hospitality   began with a Hotel Management degree from Boston University. Gerard is first generation immigrant from Syria. Shortly after settling to Maine in 2000, Gerard and Annie established the Armenian Cultural Association of Maine to promote and preserve his Armenian culture. Among events they brought to Portland are lectures by notable authors, accomplished speakers, and Armenian folk dance and music performances.