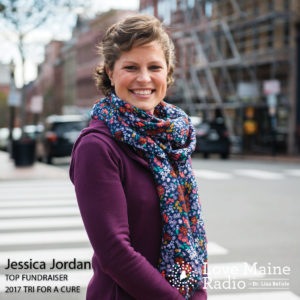 Jessica Jordan, Top Tri for a Cure Fundraiser in 2017

Jessica Jordan was 34 when she was diagnosed with stage-two breast cancer. The lump was discovered two months after she became engaged. She went through almost a year of treatment and was only two months out of radiation when her mother, who had taken care of her during treatment, passed suddenly from a pulmonary embolism. To honor her mother’s memory, she completed the Tri for a Cure in July and was this year’s top fundraiser, breaking her goal by $44,000. As a tribute to her mother, she plans to dedicate the rest of her life to giving back.