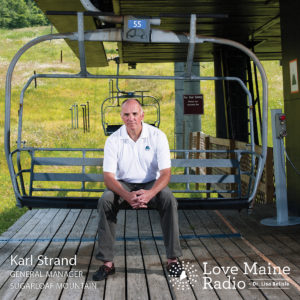 Karl Strand became Sugarloaf Mountain Resort’s general manager in April 2015. He previously helped manage key segments of Sugarloaf’s operations, as well as those of its sister resort, Sunday River. A Sugarloafer since 1987, he first realized his love for skiing while visiting Sugarloaf and other ski areas throughout Maine and Vermont. After graduating from Bryant University, he entered the lodging industry and discovered his passion for food and beverage operations. He worked in fine dining venues around the country and eventually completed his studies at the Culinary Institute of America. He began his career at Sugarloaf and Sunday River in 2004 when he was hired as vice president of lodging and property management for both resorts. He has also served as the vice president of mountain operations at Sunday River. In addition to his duties at Sugarloaf, Karl also serves on the board of trustees of Carrabassett Valley Academy.