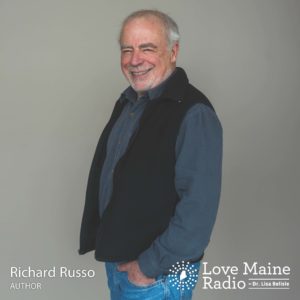 Novelist and screenwriter Richard Russo is the author of eight novels, two short story collections, and the memoir Elsewhere. Empire Falls won the Pulitzer Prize for fiction in 2002 and was made into an Emmy nominated HBO miniseries starring Ed Harris and Helen Hunt. His most recent novel, Everybody’s Fool, is a sequel to the earlier Nobody’s Fool, which was made into an award-winning movie starring Paul Newman. Russo is currently vice president of the Authors Guild. He lives with his wife Barbara in Portland, where his daughter Emily recently opened a bookstore called Print.  He’s collaborated with his other daughter—artist Kate Russo—on the book Interventions and more recently on screenplays. His most recent book of stories, Trajectory, was published in spring 2018 by Knopf, and a collection of essays, The Destiny Thief, comes out in May of 2018. He’s currently at work on a new novel.