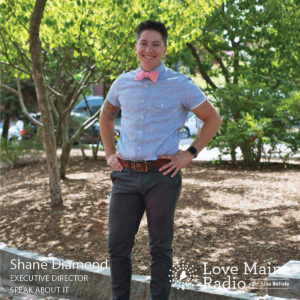 Shane Diamond, Speak About It

Shane Diamond is the executive director of Speak About It, a Portland–based performance nonprofit promoting consent education and sexual assault awareness at high schools and universities around the world. He has overseen the performance and cast since graduating from Bowdoin College in 2010, where he spent four years playing varsity ice hockey and talking about sex. Under his leadership, Speak About It has performed for over 175,000 students at more than high schools and universities across the country and around the world, sparking dialogues about consent education and sexual assault prevention. Diamond lives in Portland, ME with his wife and their pup, Harvey, and can be found drinking fancy coffee, modeling bowties, and writing bad jokes.