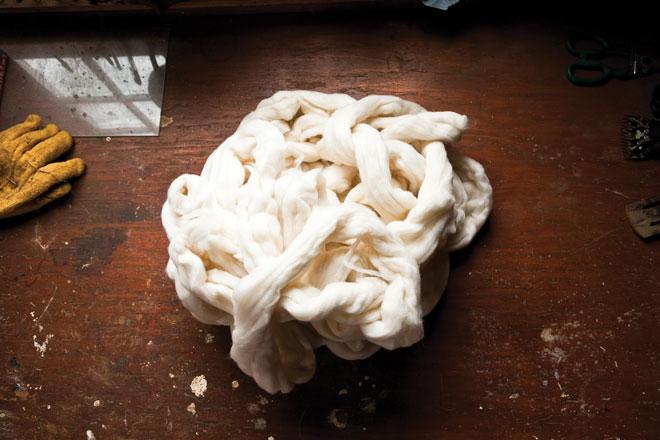 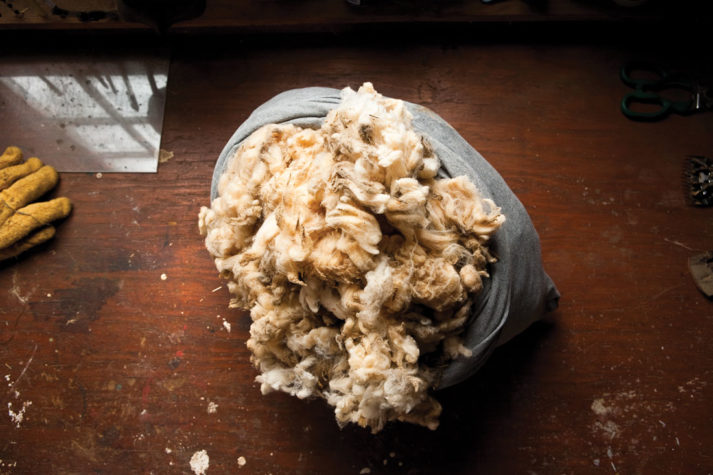 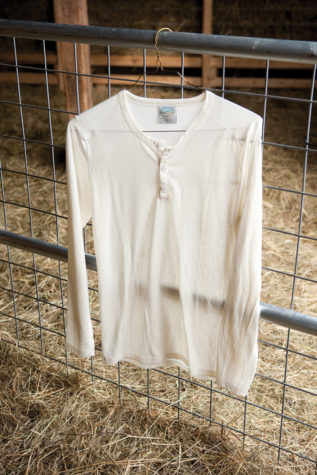 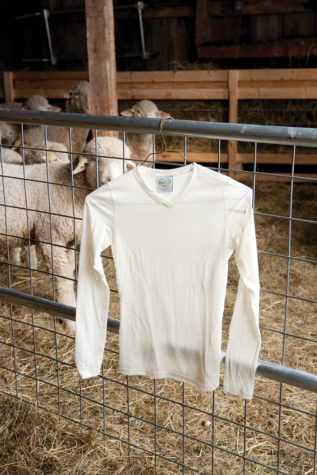 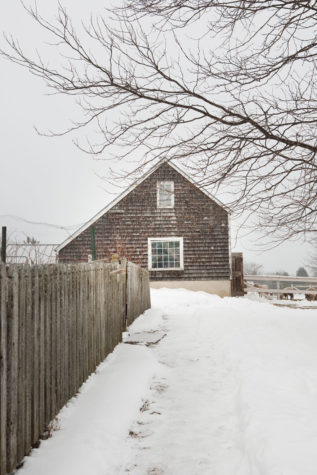 The farmhouse at Toms 80-acre farm in Kennebunk. 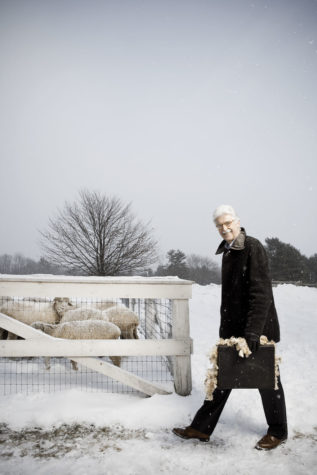 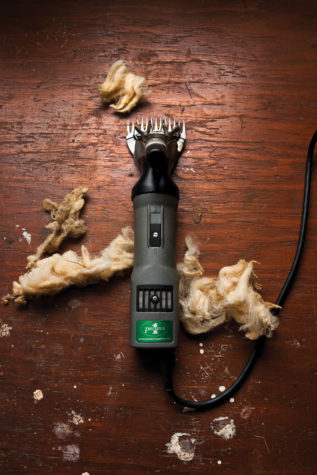 The wool used for the garments is much finer than most U.S. wools, and Ramblers Way Farm has been paying Western sheep ranchers a premium for premium 18.5-micron wool. 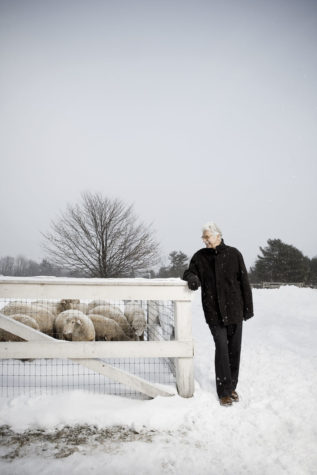 Tom Chappell crusaded a business model focused on sustainability, renewability, and goodness. His newest company, Ramblers Way Farm, places a premium on those same values and the origin of clothing. Its all American-raised, American-made, Tom says. 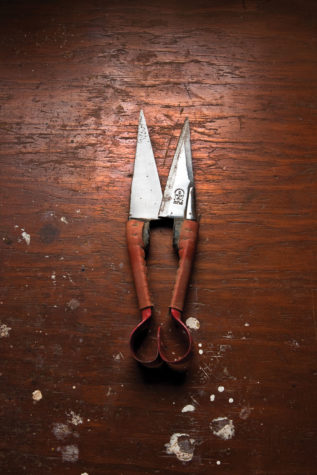 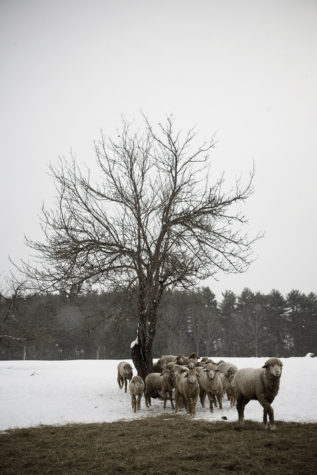 The small breeding herd of Rambouillet sheep on the farm in Kennebunk, seven miles from the Ramblers Way Farm offices on Main Street.

FEATURE-March 2010
By Peter A. Smith
Photographs by Jarrod McCabe

INTRODUCING TOM
Tom is a tall, lanky guy with a twinkle in his eyes. He’s walking around his Kennebunk farm in wool long underwear, black pants, and a dapper full-length overcoat. He’s looking over a small flock of sheep.

This idea of being casual and free, of walking in a way that’s unconcerned with direction or a lot of focus, has a lot to do with his new company. Although it may seem antithetical to entrepreneurial drive, it’s working.

AND RAMBLER’S WAY
In May 2006, Tom sold a major stake in his namesake company, Tom’s of Maine, and took a trip to Wales with his son Matt. The two walked and walked, about 12 miles a day, following the little yellow trail blazes through the rambling, rural countryside.

They started each day in driving rain and walked until noon. They would stop at the top of a ridge, looking down on the lush paddocks. The sky would clear. Tom and Matt ate bananas and drank water. Then, they would walk some more, climbing the wooden stiles over the sheep fences, and continue walking. They would stay at farmhouses at night. Halfway through the trip, Kate and Gabrielle joined them on the walk.

It was a ramble: pure and simple. And along the way, they saw a lot of sheep. That’s when things started to get a little complicated and Tom started dreaming up another, newer project. “Wouldn’t it be nice to wear something that was more comfortable?” he said. “A next-to-skin garment that was warm and wasn’t scratchy and was made in America.”

A LINE OF WOOL APPAREL
Tom says, “There was a little reluctance to build another company. So, at first, the thought was, ‘Let’s have this as a fun hobby and create textiles.’ ”

He and Kate had both grown up around silks and woolens. Her family owned the Cheney Brothers Silk in South Manchester, Connecticut, and Tom’s father worked
with Roger Milliken in Maine.

After returning from Wales, the Chappells began talking with farmers and ranchers. They even started raising a small flock of Rambouillet sheep on their farm outside of Kennebunk. But they found that, in the short term, Maine wasn’t going to be able to meet the quality they needed for superfine worsted wool undergarments. “We couldn’t get the fineness of fiber working with local breeders,” Tom says. “So we had to go commercial scale.”

After 18 months of research and a couple trips out west, he launched another national brand, Ramblers Way Farm.

“I didn’t want the idea of goodness in business just dismissed as a one-of-a-kind, stand-alone experience of how to be socially responsible and profitable, so Ramblers Way was one more attempt on my part to demonstrate that, look, here is a way of business to have a set of values that are more holistic, rather than just being bottom-line driven.”

“Tom and I started looking for mills that were very clean, that didn’t use a lot of chemicals,” the company’s designer Jane Laug says. “There are only a few left. Most of the textile industry has left this country.”

The fabric is finished with a process that is new and patented—using enzymes instead of chlorine or liquid nylon to help prevent the machine-washable wool from shrinking—and it’s cut and sewn in Fall River, Massachusetts.

So far, it’s a small collection of off-white long johns and long janes, women’s hipster briefs and men’s boxer briefs, long- and short- sleeve shirts, a camisole, and a Henley. Laug is also working on designing a line of outer garments.

This winter day, the Chappells pull on their wool shirts and get ready for a morning at their Main Street offices in Kennebunk and a quick jaunt on the snow-covered farm.

The company is just getting started, but they think the business is not just sustainable. It might just be a blockbuster.

“You’ve got the Baby Boomers that are still carrying the environmental values that we crusaded,” Tom says, “and you’ve got the new generation of green that is even more committed to sustainability. Just go to any concert and look around. They’re all Tom’s of Maine toothpaste users.”

“Pretty soon,” Kate says, “they’ll all be wearing our shirts.”

The clothing line is available online and at select retailers.