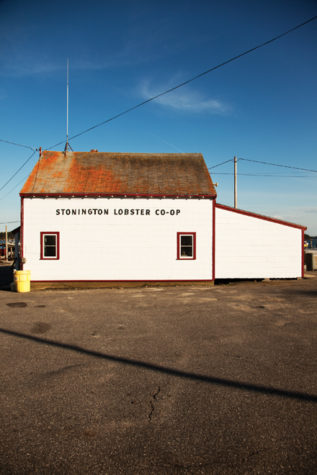 The main offices of the Stonington Lobster Co-op #1. 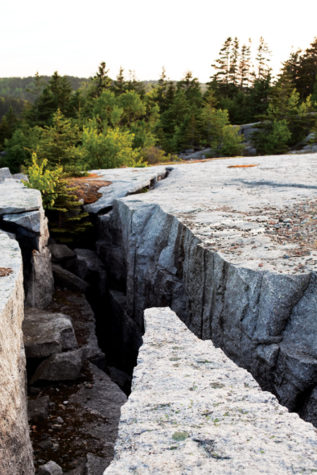 A deep crack in the granite at Settlement Quarry bears testament to human industry. 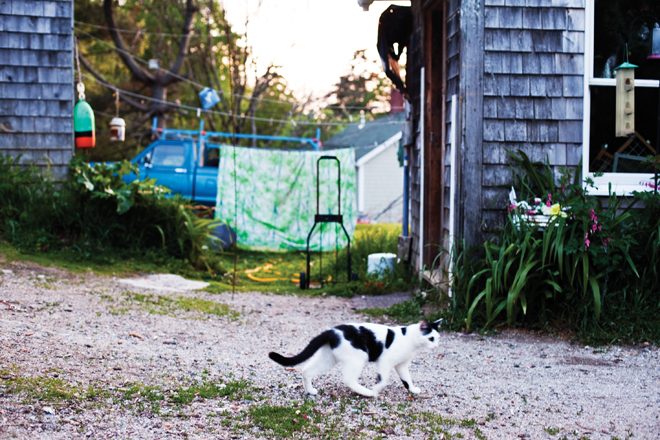 A cat scurries across a driveway in the Stonington dusk. 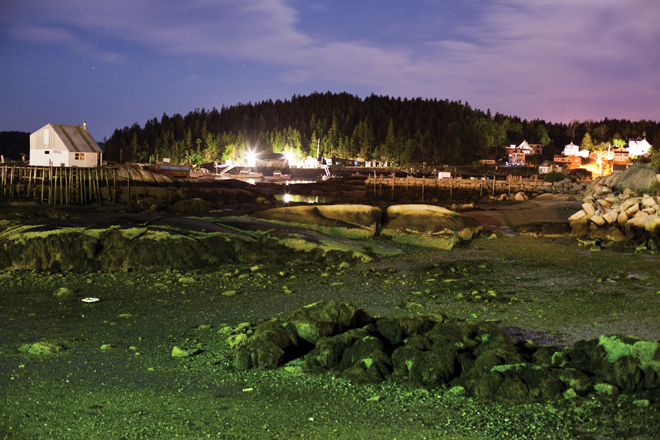 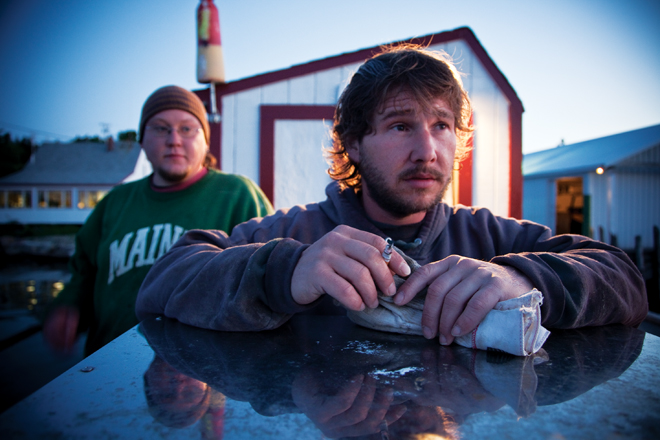 Richard L. Nevells Jr., also known as Poochie waits for the next boat to load at the Co-op. Caleb Foster, another Co-op employee, looks on behind him. 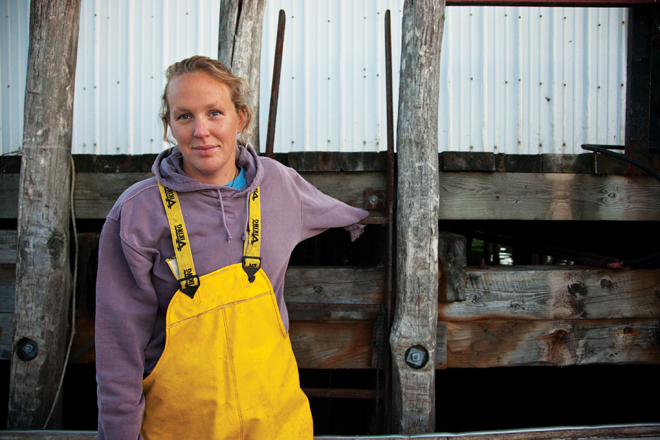 Erin Bray works with her father, Russell Bray, on the boat Home Brew. 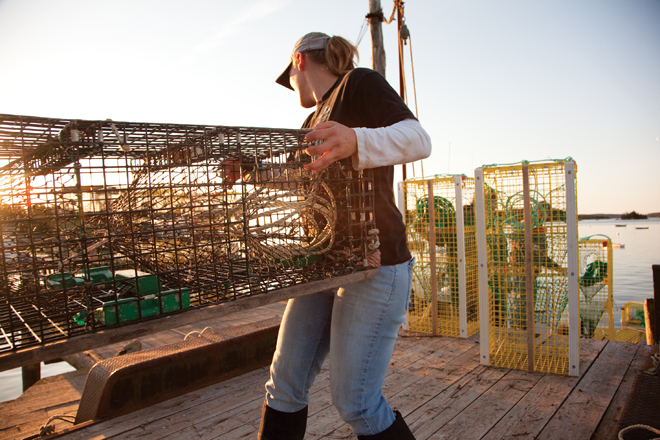 Alyssa Lapointe helps Franks crew with traps before they head out to set. 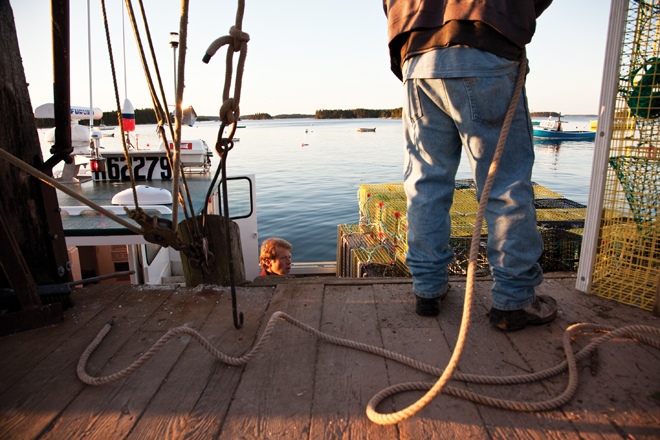 At 6:00 in the morning workers at the Stonington Lobster Co-op load Frank Gotwalss boat with traps and line. 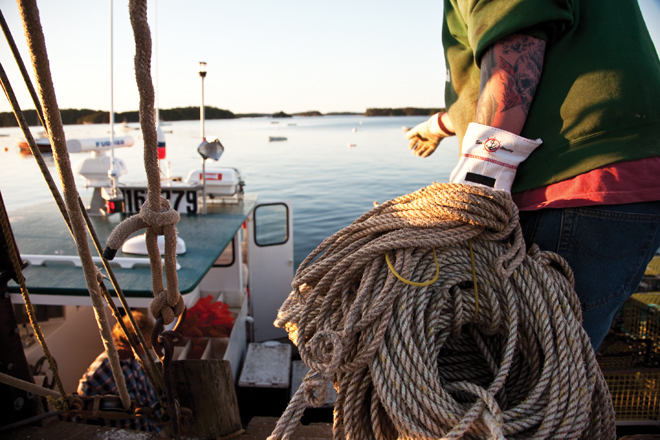 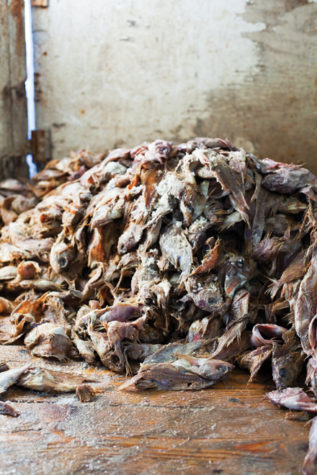 Red fish piled on the floor of the bait house at the Co-op. 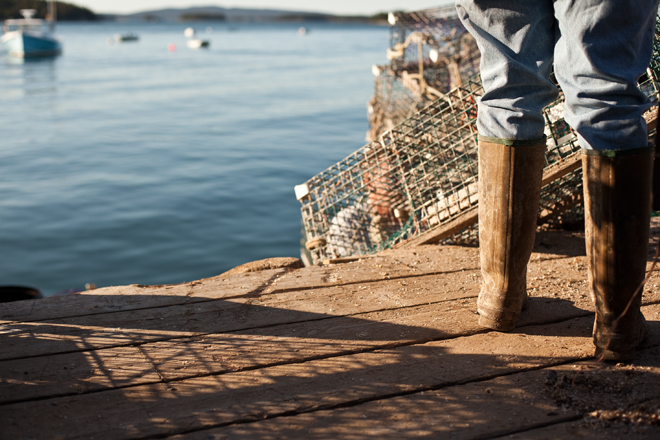 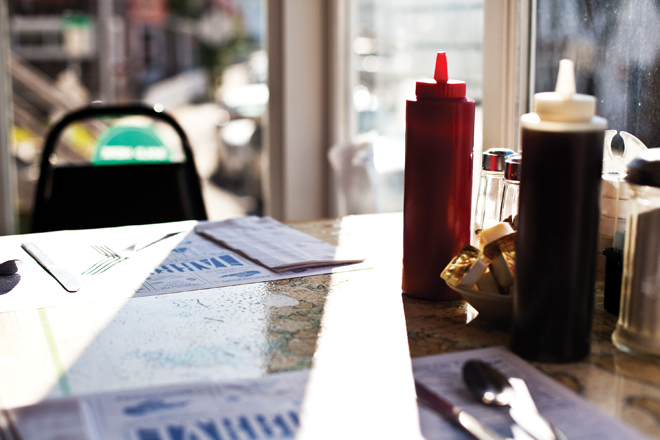 The sun shines on a window seat at the Harbor Cafe? in downtown Stonington. 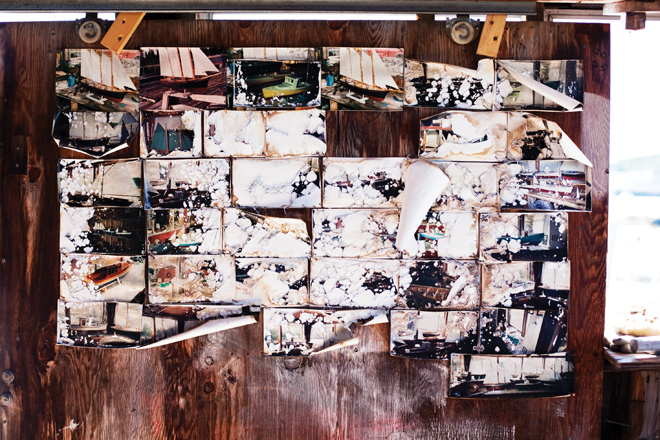 Weathered photographs of James Robbinss model ships line the wall of his shop. 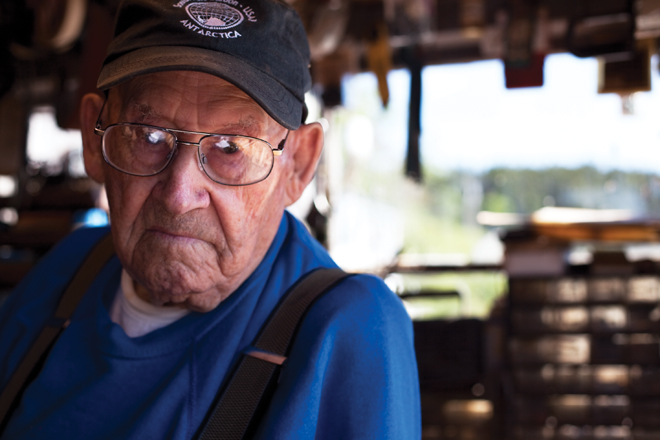 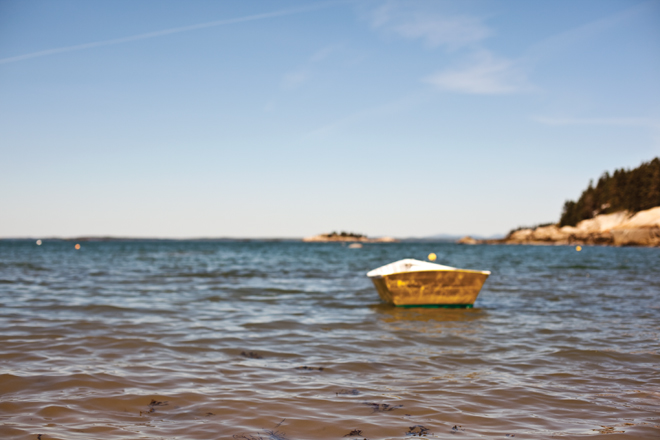 A yellow skiff at sand beach, not far from downtown Stonington. 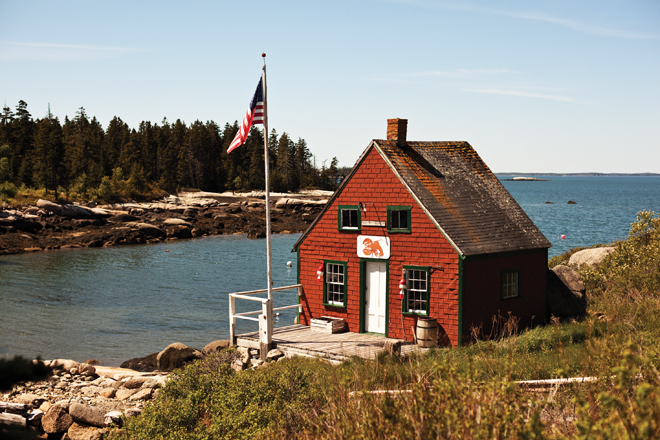 An iconic lobster shack off Sand Beach Road in Stonington. 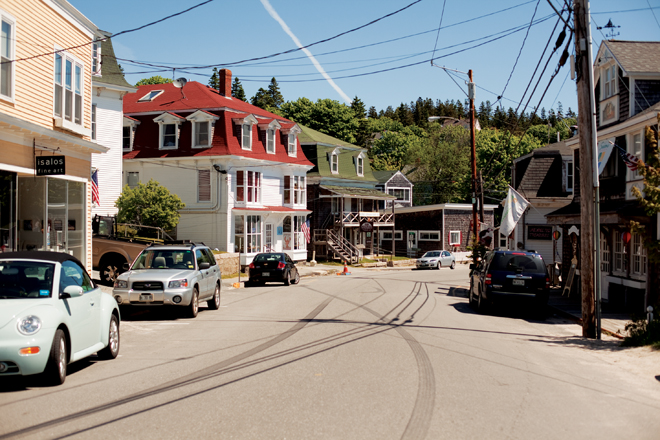 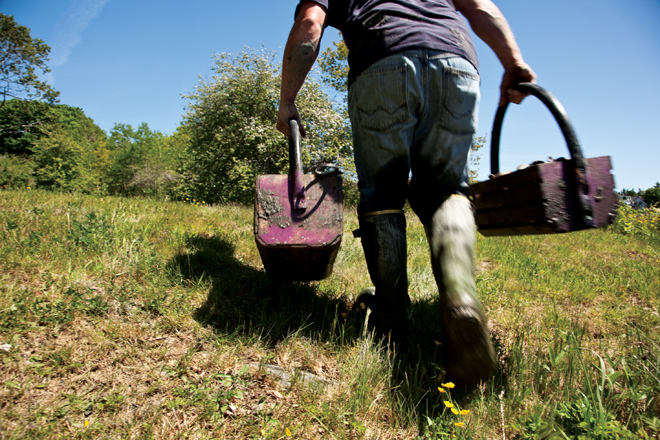 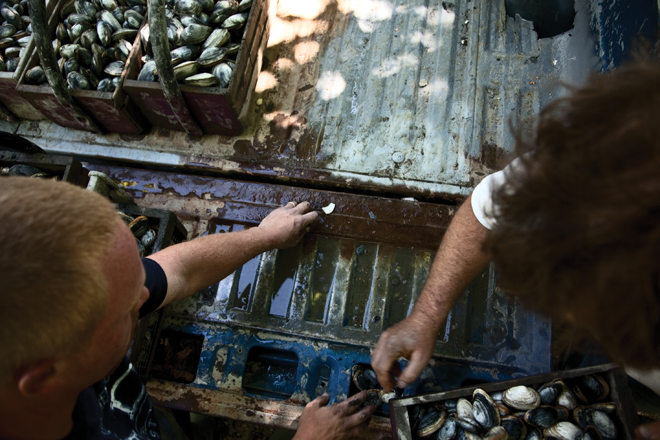 Alan Hutchinson and son-in-law Carl Shahan clean the tailgate of their truck after a day of clamming. 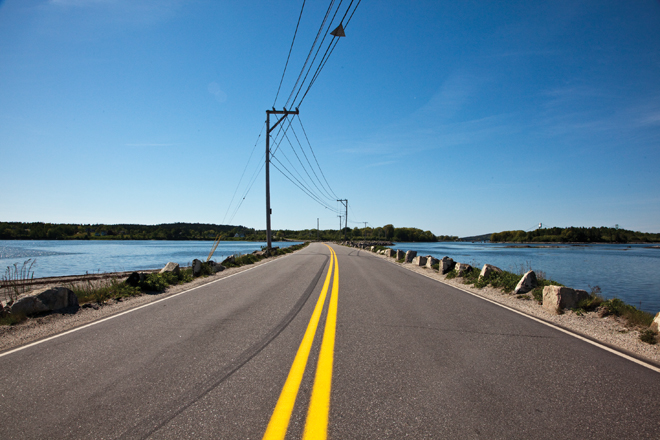 Somewhere off the coast of Deer Isle, I crack open a sea urchin on the rail of a lobster boat.Careful to avoid the bristling green spines, I use my safety knife to extract the urchin’s quivering orange roe, known to sushi eaters as uni. This uni is briny and rich, slippery on my tongue, and a welcome snack during a long day of lobstering. Normally, urchins aren’t a treat. Known locally as “whore’s eggs,” urchins were once so common—and aggravating—that my captain kept a set of tweezers in the wheelhouse to dig spines from his fingers. But now, those tweezers are gone…and so too are most of the urchins. The one I’m eating is the only one we’ve encountered all day—many of its fellow urchins met their ends on dinner tables
in Japan.

Yet lobsters do not mourn their absence. Urchins eat seaweed, which provides shelter to young lobsters. Some believe that more seaweed means more lobsters. And these  durable, unassuming crustaceans are why I’m out here. Lobsters are, in part, what brings the tourists to Deer Isle, and after they arrive, visitors often describe the island as a paradise. I’ve called it that myself as well, but it’s easy to forget that beneath the idyllic surface, beneath the waves, is a landscape that’s been profoundly changed by humans.

I grew up on a sprawling constellation of small islands and peninsulas that are tethered to the mainland by a graceful bridge and connected to one another by causeways—and by the shared idea that a bunch of rocks covered in a thin layer of soil can be considered a single entity: Deer Isle.

Or actually, two entities. Deer Isle encompasses the townships of Deer Isle and Stonington, two neighbors and sometimes rivals. And within these communities, there are smaller divisions and informal neighborhoods, some with names that appear on maps—Oceanville, Little Deer Isle, Pressey Village—and others that don’t, like Tar Paper Alley and Clam City.

The names hint at an older island, one that was a world unto itself, one still remembered by the old stone walls that snake through the woods. Pieces of these forgotten barriers have found their way into the causeways that connect the island; when the causeways began to erode, men reinforced them with rocks quarried from Pine Hill, one of the tallest points on the island.

From the top of Pine Hill, Deer Isle sparkles before you, pastoral and quiet. The Deer Isle–Sedgwick Bridge appears thin and delicate, a fragile man-made connection to the rest of the planet. It doesn’t sway as much as it used to, but stop your car atop the bridge on a stormy night and the road heaves below you. The bridge brings most of us to Deer Isle, but the island’s true gateway is Stonington. When you approach Stonington from the sea at night, the illuminated houses and piers seem to rise up from the darkness, and the town reveals itself as a working port.

Stonington takes its name from the granite that lies just below the island’s skin. It was a boomtown, attracting thousands of foreign stoneworkers who literally reshaped the landscape around them. Parts of Stonington, blasted loose with dynamite, have found their way into monumental works, including the bridges in New York City and the John F. Kennedy memorial in Arlington National Cemetery. Float past Crotch Island and you can hear the granite being extracted and cut, a jarring, mechanical sound. The vestiges of the granite industry are still found in the woods—hulking, rusting machinery, now home for birds; old quarries filled with water; scraps of granite amid raspberry patches.

But the lifeblood of Stonington today is lobster. Dealerships line the waterfront, including the Stonington Lobster Co-op, a lobsterman’s collective founded nearly sixty years ago. In the early morning darkness, lobster boats line up outside, awaiting their daily bait, which—when the tide is out—must be lowered to the boats with a winch. Fishermen await their cargo with arms raised, like men receiving a holy offering. And the waters off of Deer Isle do seem to be blessed, giving us 8 million pounds of lobster last year, more than anywhere else in Maine—more than have ever been caught before. On a clear day, there are so many lobster buoys glowing neon against the dark water that it really looks—as people say around here—as though you could walk across the ocean on them.

But to hear the scientists tell it, lobster is as much vulnerability as strength. It’s all that’s left after we’ve caught everything else. The lobster moves among the ghosts of codfish, haddock, flounder, and most recently, urchins. This consequence is tantalizingly easy to forget when you’re sitting on the beach eating steamed lobster, dipping the meat in melted butter, with the sun glinting off the ocean and the wind in the fir trees. It may feel like you’re part of a tradition stretching back to the beginning of time, but our ancestors would surely
be shocked at how little remains.

A small nonprofit, devoted to restoring what was once abundant, started an experimental lobster hatchery, a high-tech operation of tanks and tubes and pumps housed in an unassuming outbuilding near the Co-op. The juvenile lobsters reared there seemed to be impossibly tiny versions of the creatures that appear on our dinner plates, and if you held one on your fingertip, it felt like it weighed nothing.One late-summer day, not long before my brother and I leave the island—he for adventure overseas, me for the city—we become foragers. Near the Old Settler’s Cemetery, which holds some of the oldest Caucasian bones on Deer Isle, we find an abundance of blueberries. They are fat, deep blue, and nearly as big as crabapples. Down the sloping hill, we draw blood while collecting quarts of blackberries.

At the Co-op, we take herring from the bait shed and slice it on the dock, spear it with fishing hooks, and bring up several gleaming mackerel. Supplemented by clams that we pry from the mud, and a couple lobsters that I caught the day before, we sit in the fading sunlight and have a feast. Even though it’s just the scraps of what was once here, when the berries are finally baked into a pie, the mackerel has been fried in a pan, and the lobsters steamed, it is still delicious, still sacred, still worth celebrating.