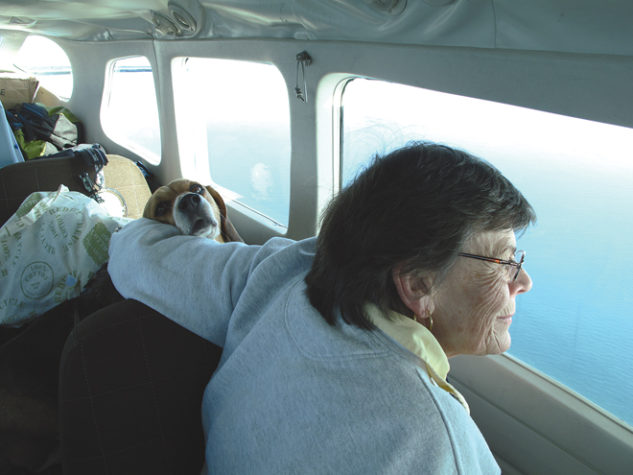 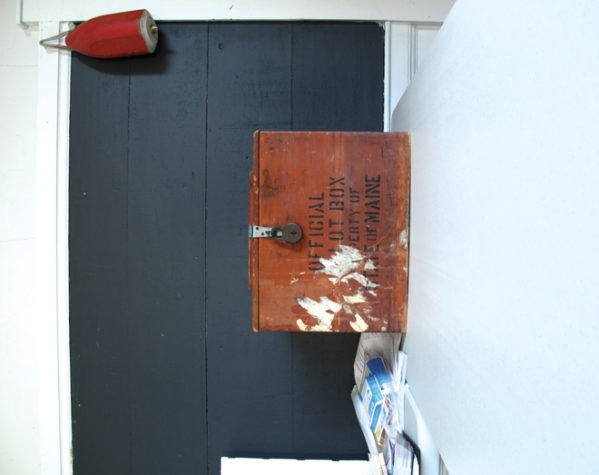 The islands ballot box in the Town Hall 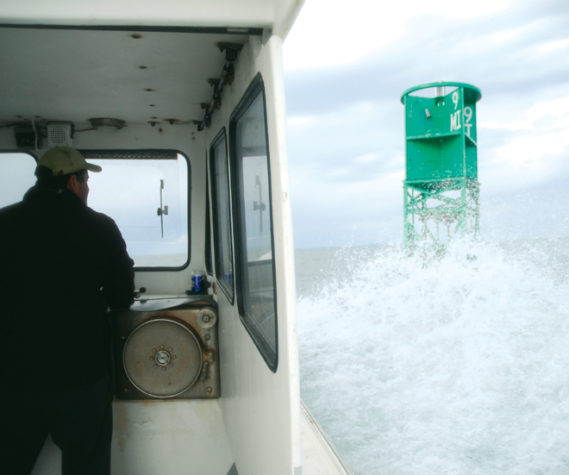 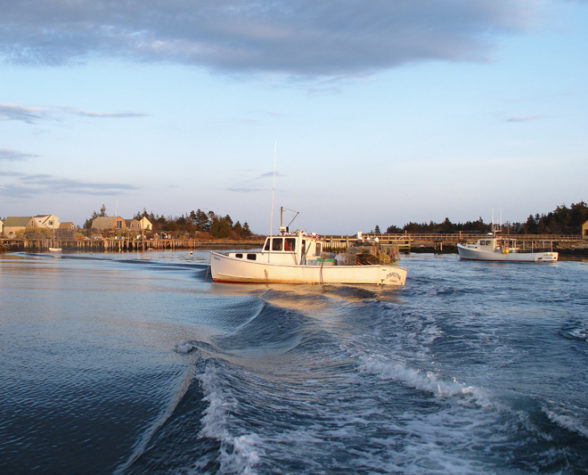 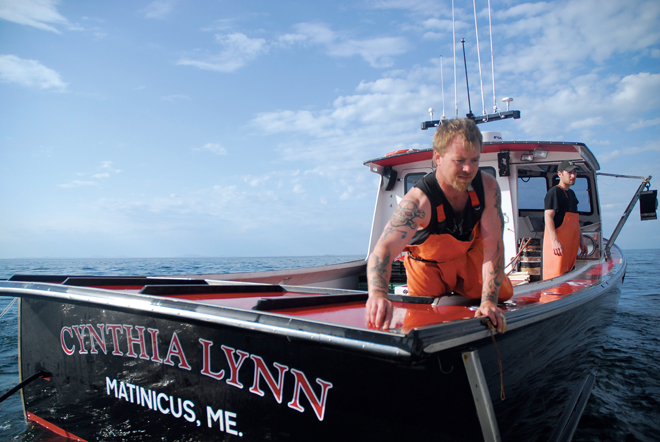 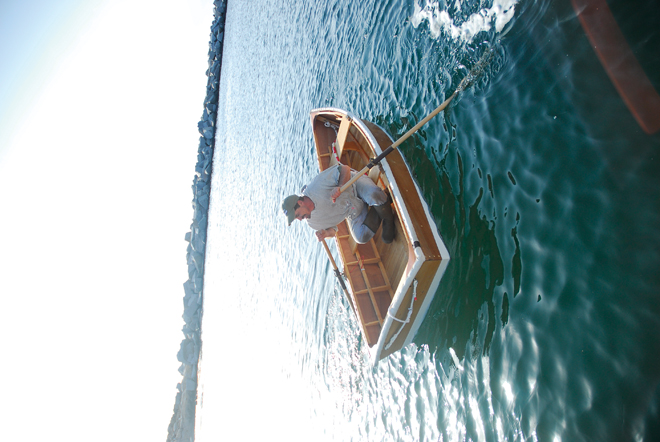 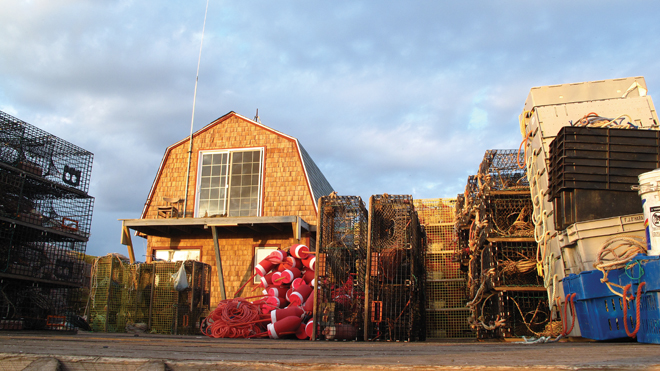 The home of lobsterman David Reed on Criehaven 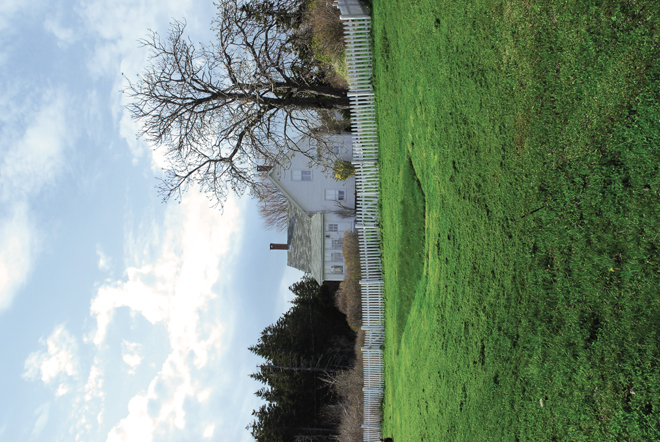 On the eastern side of the island, a home facing Old Cove 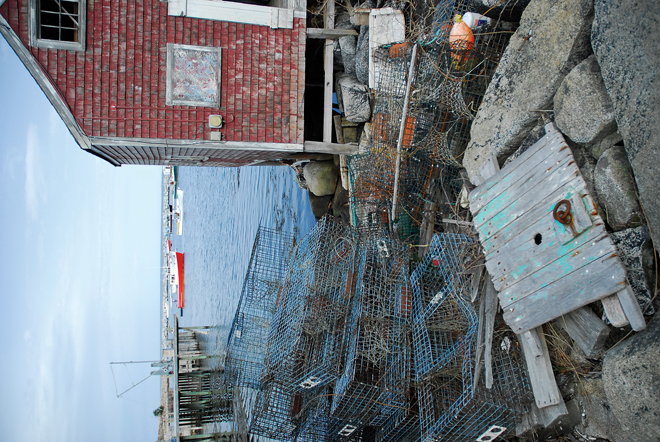 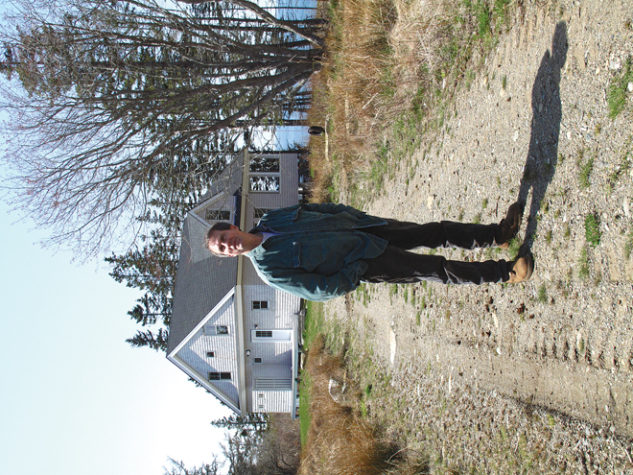 John Libby at his rental house near Philbrook Cove 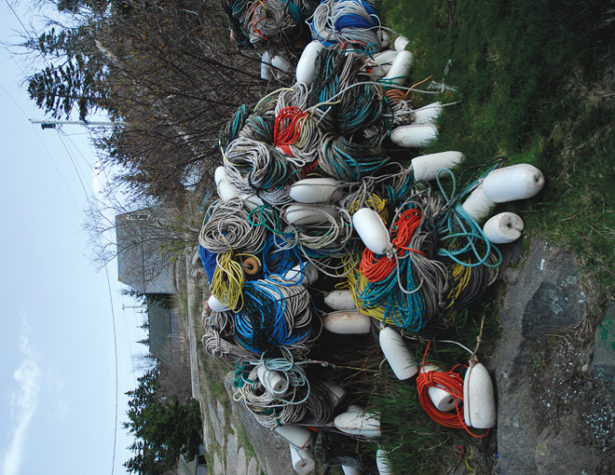 Buoys on the outskirts of Matinicus Harbor 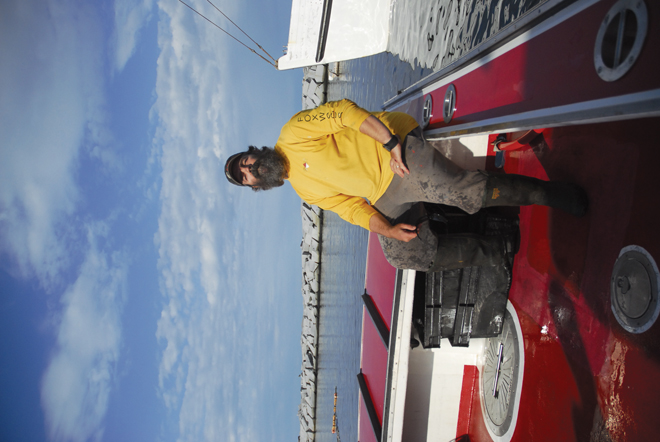 Robert Young, the Matinicus lobsterman who owns the Cynthia Lynn 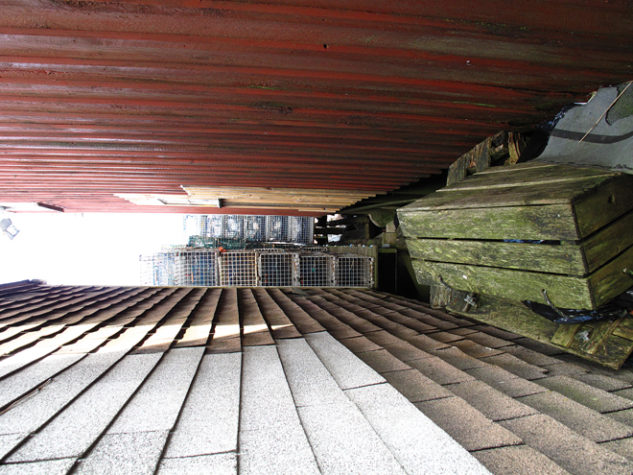 Alley between lobster shacks on Matinicus 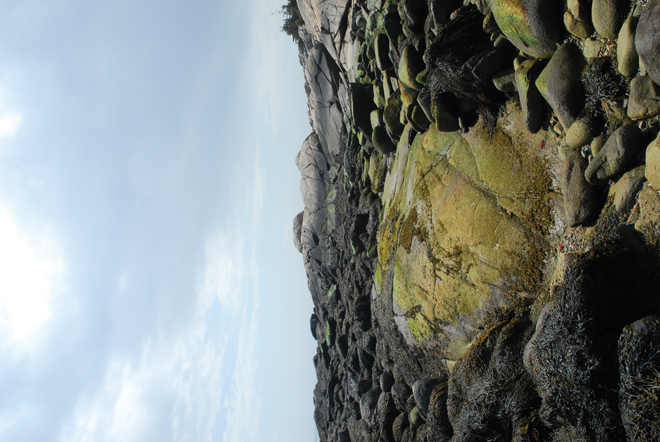 At a private beach on Matinicus 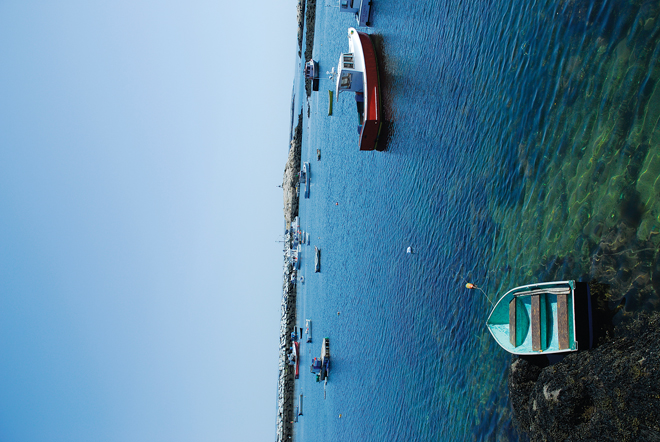 Looking out at the Indian Ledge breakwater 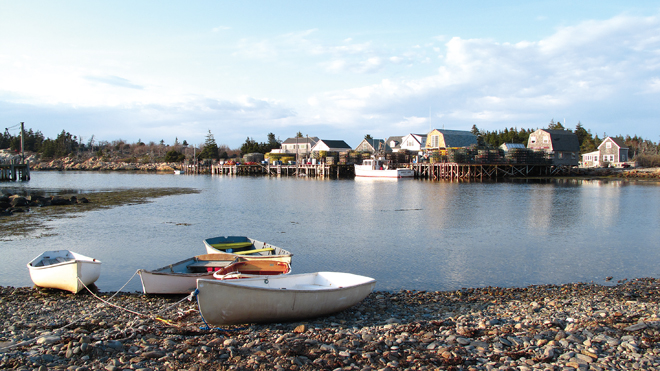 Out past Isle au Haut, past Monhegan, past Metinic, approximately 22 miles out in the middle of the Gulf of Maine, sits Matinicus Island, a 750-acre granite tooth covered with black spruce.

I once headed out to Matinicus in a 22-foot sailboat with old canvas and a sputtering Evinrude. Bad idea. If the wind blows, or even if it doesn’t,
the swells outside the harbor can be mountainous. The entrance to the harbor is narrow, and there are no moorings to borrow. Even the ferry, which I rode out to the island a few years ago in November, can heel 45 degrees as it careens into the harbor. The ferry only stays for a short time at high tide in the shallow harbor, and in the fall it doesn’t come back for a month.

My great-great-grandfather owned Squirrel Island, near Boothbay Harbor, in the mid-1800s, and my ancestors had been ship captains, island fishermen along the coast, some of the earliest pioneers of the Maine coast. My grandparents bought a cottage after World War II on an island in Sheepscot Bay, and my grandfather kept old ships’ logs in a sea trunk there. I longed for the kind of life
stowed away in the trunk, a life I knew I would never have. Although the island had no
cars and you had to get there by boat, the island
I always dreamed of and wanted to visit was Matinicus. To me, Matinicus was the island left behind my time. I had to get out there.

One fall several years ago, my grandfather’s good friend and fellow schoolteacher Hal Owen, who had been going out to Matinicus in the summer since the 1950s, offered to let my wife Kirstin and me live in his house, so we went out by ferry and moved into the 1850s farmhouse that faces South Beach and Criehaven Island. One thing was clear when we arrived: the people from the old families who had stayed on Matinicus and the people who had come more recently from the main had come here for its beauty and for its isolation. To be left alone.

Harbor Point (also called “Probation Point”), a piece of shoreline extending out from the harbor where sternmen from the main lived in trailers and shacks bolted to the rocky shore, was, as I remember it, a sort of armed camp. The young men living there worked hard and shot things. I was told that people from away were sometimes referred to as “targets,” and Kirstin and I had to hit the dirt more than once while taking scenic walks in the woods. Not because they were shooting at us (I think), but because they were shooting pheasant or seagulls or something else.

Unlike the hard-partying sternmen, the lobstermen who owned their boats, the Ameses, Bunkers, and Youngs, seemed very serious about their business. Many of them were clearing more than a $100,000 before the recession, and they worked hard (an understatement) and focused entirely on the half-science, half-voodoo of catching lobster. Some of these guys seemed like they were living the myth of the outlaw fishermen and doing so quite self-consciously. One Ames flew skull-and-crossbones off the stern of his 40-foot lobster boat; another Ames, David acted as the island’s unofficial constable. He drove a Jeep Cherokee that was sawed off above the hood and painted black with white stars on the front doors. I felt these displays were partly for show, for laughs, and partly an expression of how serious they were about their independence. Like their ancestors, they wanted to work for themselves, on their own terms, and live the way they wanted to live.

Several times people asked me why we had come to spend the fall out on the island. The simple answer was that I wasn’t living the way I wanted to live. I liked teaching, but I didn’t like living in the world. I didn’t want a life that was average, normal, or easy, and there was something I had not found in all the places I had lived since leaving Maine. I was there because I had this idea that I wanted to find the Sheepscot Bay I remembered from my childhood, before people from out of state built huge mansions around us and pushed the fishermen off the shore. In my imagination, the perfectly isolated, lost-in-time Maine place did not include people like me.

I had a sense that people on the island thought a lot about who belonged and who didn’t belong. Who had the right and who didn’t have the right to speak for the island or make decisions for the place. The concern did not arise from the island’s remoteness—these days Kirstin and I live part of the year in an isolated village on the island of Cape Breton, Nova Scotia, where no one worries about who belongs and who doesn’t. The difference is that in Cape Breton you can still trade an old snowmobile for several acres of land. People with a stake in Matinicus worry about who belongs because the island is contested ground: A handful of fishermen hang on to a few acres and an old way of life while the school population dwindles and romantics from Philly show up with millions of dollars to plunk down on a waterfront homestead they will use a few weeks a year. People seemed relieved that Kirstin and I were too poor to go around trying to buy their homes, but no one seemed happy to hear that I was a writer (the latest in a long line of them to visit the island). The island already has a resident writer, a very good one, Eva Murray, a woman who also doubles as EMT, baker, former island teacher, holder of many island governmental offices, and, it seems to me, a bridge between the different parts of the community.

One summer resident I remember had a small day sailer and marginal sailing skills. He diligently left the harbor on sunny days. The lobstermen called him Christopher Columbus, and usually they had to tow him back to the harbor. There was an actress from New York who owned a large house and a long field, which she donated for use as the island airfield. Professionals and business people and artists had bought places along the waterfront. Most of the waterfront is owned by people who do not live year-round on the island. One of these properties was put up for sale a couple years ago for over a million dollars.

On the ferry ride out to the island, I met one summer resident, John Libby, who seemed typical of many Matinicus summer people. He owns a timber frame company in Freeport, and his ancestor (and my ancestor as well) John Libby was one of the first English settlers of Maine, a fisherman on Richmond Island in the 1630s. He clearly had deep roots in Maine and a love of Matinicus—probably, I imagine, because the island represented a Maine our great-grandparents had known. Like many summer residents, he seemed to want the year-round community to survive. He and his crew rebuilt the island school. Another summer resident I met, Suzanne Rankin, was the descendent of the island’s first English settler, Ebenezer Hall. She helped raise funds to fix the house where the schoolteacher lived.

There is still some tension between the two resident groups: the old fishing families who have stayed there to maintain a way of life in isolation from the world, and those who have bought property there in search of isolation. One woman, a summer resident, arrived in June to find that her propane tanks were missing. A helpful young man from a lobstering clan drove her around in his old truck to see who had borrowed her tanks. They went from house to house—of course, he was the one who had borrowed the tanks during the winter when they were needed, and she eventually got full replacements. I was told that these two groups have to mix. They need each other.

Much is written about the cowboy culture on Matinicus, and a recent shooting has exacerbated the island’s renegade reputation, but the core of the island, both summer and year-round people, are serious about lobstering and maintaining the community. One young couple we got to know was the result of such a mixture. The man, John Griffin, had grown up as a summer resident, and the woman, Natalie, was an Ames. Eventually, the lobstermen from the island voted to allow John the right to buy his own boat and fish his own grounds near the island because the couple wanted to stay on the island and make it their home.

Over dinner one night, I talked to him seriously about hiring me to go stern for him some year. He seemed open to the idea, or maybe he was being nice. I frequently think of the place and its people, especially John and Natalie. I hope they make it out there, and I often wish Kirstin and I were with them. Both John and Natalie explained the need for more families to move to the island and live there year-round. I understood that the island didn’t need more summer people buying up land and making it more expensive for the locals, and it didn’t need any more nostalgic writer types.