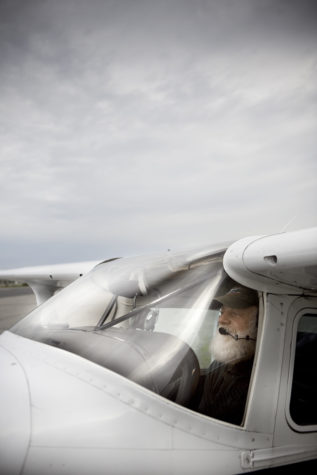 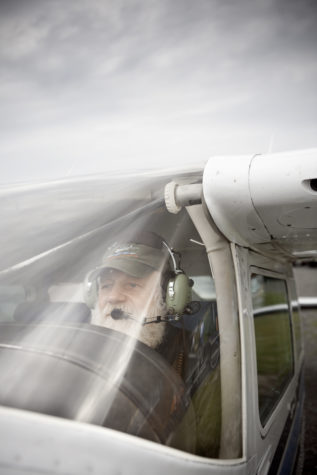 When not flying, Pilot Rob Hoffman plays Santa in a mall during Christmas. 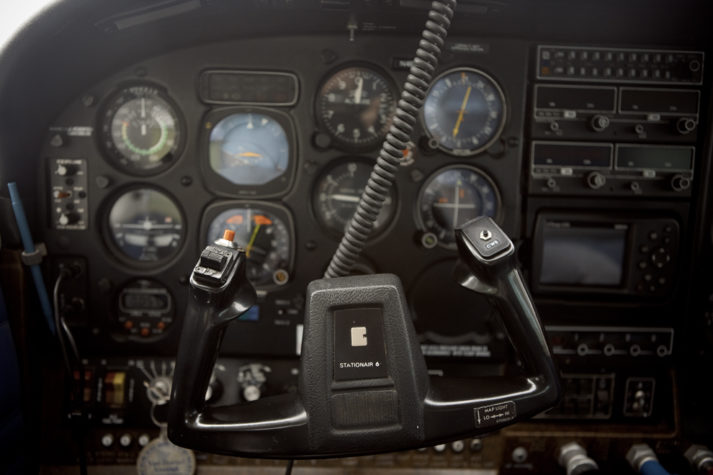 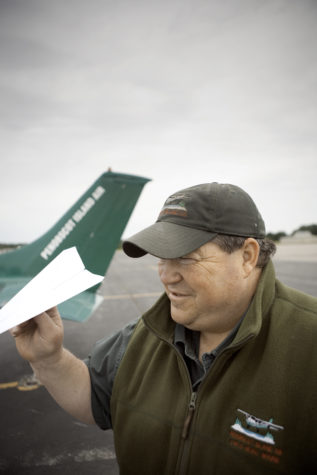 Kevin Waters, owner of Penobscot Island Air, put up his life savings to start the airline. 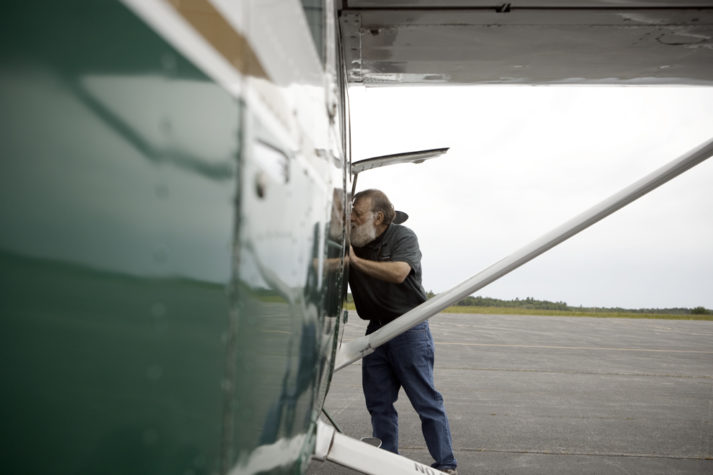 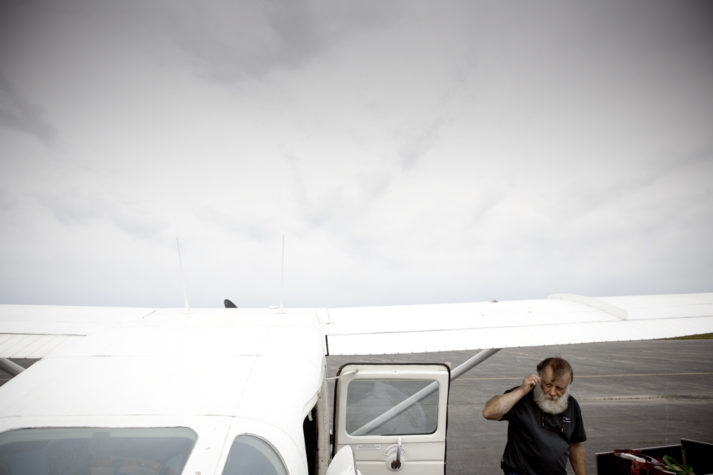 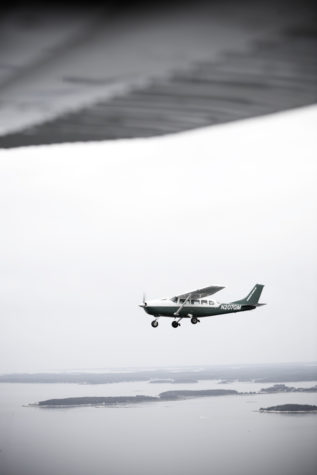 When the weather is right each plane takes flight around 20 times a day. 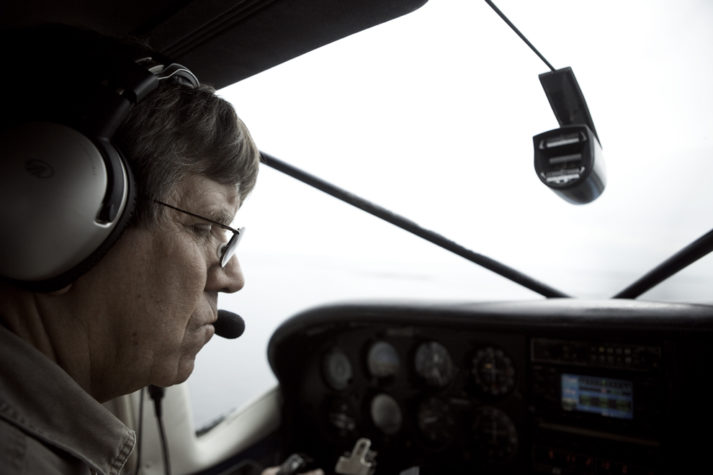 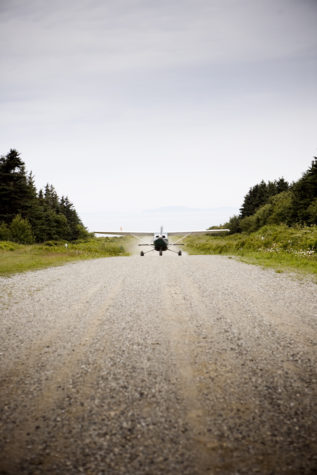 One of the four singleengine planes that make up the fleet lands on the runway of Matinicus Island.

PROFILE-August 2010
By Will Bleakley
Photographs by Jarrod McCabe

On December 13, 2004, Matinicus Island resident Eva Murray was flying home as usual, but noticed that her always-affable pilot was not himself. “Kevin was flying the plane,” she told me on the runway of Knox County Regional Airport, speaking loudly to be heard above the roar of a single-engine Cessna preparing to take off. “He was in a really bad mood, which was very uncharacteristic of him because he’s usually so friendly and talkative.” As it turned out, Maine Atlantic Aviation, the only transportation service available to the island during the winter months, abruptly closed shop, just two weeks before Christmas. Gifts were piling up on the mainland, and families couldn’t get off the island to see their loved ones. “It couldn’t have happened at a worse time,” says island resident Suzanne Rankin. “Santa comes by UPS on Matinicus.” Among the island’s residents, there was a legitimate worry that Christmas was not going to happen. A few days later, in an emergency town-hall meeting, the community of Matinicus pooled together $17,000 for Kevin Waters, who matched their generosity by putting up his 401K and home equity to start his own company. In the end, though he bears some resemblance in stature and general rosy kindness to Santa Claus, he came to the island’s rescue not by eight reindeer, but by two propellers and one single-engine plane. “It’s just wonderful,” says Rankin. “Kevin put on his version of a red coat, which is his green vest, and he came and rescued us.” Since then, Penobscot Island Air and the communities it serves have beco me something of a living organism, constantly growing and getting stronger, but relying on one another to survive.

I drove to the Knox County Airport but couldn’t find the Penobscot Island Air offices in the dense fog covering the area. Even if it had been a clear day, I would have struggled: Kevin Waters runs his operation out of a one-room hut no bigger than a typical living room. Despite the modest accommodations, he has grown his business to 18 pilots and four Cessnas. Born in New Jersey, he first worked for the U.S. Coast Guard, then with the Loon Mountain Ski Patrol in New Hampshire, but has found himself for the past 15 years moving his way up the ladder at various operations servicing the islands of Mattinicus, Vinalhaven, Northhaven, Islesboro, Swan’s Island, and Criehaven. When Maine Atlantic Aviation was operating, Murray says, “the owner was kind of just a behind-the-scenes financial guy” who didn’t establish the same personal connections to his clients or show the same unshakeable loyalty that Waters has. When that business fell, Waters built his own from scratch with a small team that included Don Campbell, Rich Wright, and Jim Nichols. Initially, they worked out of a van, and often scrounged through dumps to find materials in order to build their single-room office.

According to pilot Mike Falconeri, “there’s this image of the bush pilot with the dark past, drinking in the bar and flying around like a lunatic, who always gets the woman at the end of the movie. The truth is this kind of flying is precise and far from wild.” Several of these pilots have flown in the military or the Alaskan bush, and though the region is peaceful, it doesn’t make the flying any easier. “It’s challenging. Anybody can’t just come along and do this type of thing,” says pilot Rick Brown through his headset mic on flight over Vinalhaven. “But when you’re landing on Big Green [a private island they service] and the waves are causing ocean spray to crash over your plane as the seagulls scatter…whew! Nothing’s better.” But for Waters, Brown, and Falconeri, it’s not about the thrill of danger or the adrenaline rush, but about providing an essential service—dozens of services, in fact—that island residents would otherwise be without.

The most basic services that Waters and his team provide are the mail and grocery delivery. “The year-round islanders are depending on you for their groceries,” says Falconeri. “You are like a god to them when you pull in through inclement weather. They need you.” The islands get infrequent ferry service (the one to Matinicus arrives once a month during the winter), and constant trips back and forth, whether by ferry or plane, quickly add up to significant living expenses. The air service will pick up groceries from Shaws, put them in banana boxes, and fly them out along with the mail to anyone living on the islands of Penobscot Bay. This is not just done for groceries, but also for medication, parts for boat repairs, and other essentials. “If Kevin can fit it in the plane, he’ll bring it out,” says Wanda Philbrook, the postmaster for Matinicus.

While Waters’s fleet provides basic necessities, they also deal with the harsher side of remote island life. “They’ll deliver anything from the silly birthday bouquet flowers to the body bags,” says Murray. Lisa Twombly-Hussey, owner of the island’s grocery store—which she says could not exist without the air service—explained how Waters came to the rescue when her mother became deathly ill. “If it were not for Kevin’s service and his employees, she would not have survived. She made it to the mainland and was able to get emergency medical care.” That same night, Waters made a trip to visit her in the emergency room. “He came to the hospital to see if she was all right,” says Twombly-Hussey. “And when she was ready to come back, he was right there cheering her on because he cares such a great deal about the people in this community.” Ann Mitchell, owner of Ann’s Mermaid Taxi, was brought to tears when she recalled the helpfulness of the air service during the incident. “Sorry—I get so sensitive about this,” Mitchell says as she wipes tears from her eyes, “but they just went through hoops for this person, and she’s alive and outstandingly well right now because of the air service and how fast they got out here.”

While the Penobscot Island Air team does everything from helping put out fires to saving lives, you wouldn’t know it from hanging around their office. The entire crew engages in that particular brand of quick-witted ribbing and light-hearted joking most commonly displayed by drunken sports fans. A baseball coach comes by, essentially to attribute his team’s success this season to Water’s generosity, but the otherwise touching moment was interrupted when a young employee pranked Waters with a “gift.” “Ashley stopped by to give this to you,” he says, smiling and holding back laughter. Assuming it was another gesture of appreciation for some act of kindness, I look over the desk. The young employee and the older pilot immediately burst into laughter as Kevin sat there with a bottle of K-Y lubricant in his hands, face growing red and shaking his head. “Nichols…,” he says, looking up and smiling. On several occasions, Waters says his relationships with his staff and customers are like family, “for good or bad.”

At the end of the day, Penobscot Island Air is still a business. While everyone I spoke with wonders how they get by—and Waters himself says that “anyone looking at this operation would tell you it’s not worth it from a financial perspective”—the company does manage to turn a profit, largely as the result of two factors: the U.S. Postal Service contract that keeps it afloat in the winter and the influx of visitors to the islands during the summer. Waters gets a kick out of seeing the ability his single-engine Cessna has to nullify class distinctions. “One day you got a Fortune 500 guy on the flight next to a sternman, and that’s what’s unique about the company. Once these Manhattan guys get in the plane, they put away the earpiece and are just like everyone else.”

Though not as attention grabbing as saving lives or as visible as the grocery service, there are certain intangibles provided by Penobscot Island Air that can’t be delivered on a single plane ride. Suzanne Rankin points to the successes of Eva Murray’s two children—one of which is attending Bowdoin College in the fall, the other a sophomore at the University of Vermont—as a testament to the ai r service. “Eva was always taking them off the island to music lessons and performances, and that’s what the plane does. It gives you freedom, freedom to explore those oppor tuni ties for your children and for yourself,” says Rankin. Although Murray says, “That sounds awfully starchy and snooty for a couple of little kids!” she does believe that the airline helped supplement their children’s education and made it “much easier for us to offer a really well-rounded childhood to the kids.” More important, though, “the pilots themselves were a great example and influence, sort of like the scout leaders and Little League coaches island kids don’t have.”

It’s stories like this that make all the extra effort worthwhile for Waters and his crew. When discussing Murray’s children, his face observably lights up. He clearly takes pride in seeing where they are heading in life, a nd he says the kids “have unique skill sets. You’d think they couldn’t compete, coming from the island, but they’re showing just how academically competitive kids from the Penobscot Bay islands can be.” Of course, he would never dare take credit, and attributes such success stories to the residents themselves.

It’s Waters’s core belief in the exceptionalism of Maine’s island communities that keeps him and his staff working 365 days a year. When I returned from my flight to talk to Waters, the first question I had was obvious: As someone not even from the islands, what drives him to go to such lengths for so little money? “I gotta tell you, it’s because you’re not going to find a finer bunch of folks. They are individuals with a can-do attitude who don’t need anyone telling them how to do this and how to do that. These folks are tremendous.” Rick Brown, who has been with the airline for almost two years, says, “It’s a special little deal, a great group of people. You get to know them here, and it’s like family. And it’s such a good feeling to know that you’re helping.”

Waters sees his operation “coming full circle.” “There are a lot of ancillary services that we do that don’t help our bottom line,” he says, “but at the end of the day—for the amount of risk and expense and all the rest you put out to do these services for the islands, and each island has its own needs—your payback isn’t necessarily always monetary. It’s the friendships, the relationships you develop, that type of thing, good or bad.”