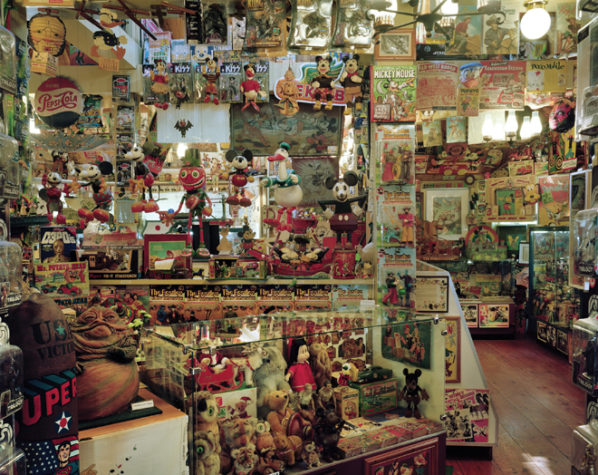 John Fawcett has been collecting antique toys and original comic art for decades. The extensive collection is lovingly crammed into seven colorful rooms at the Waldoboro Antique Toy & Art Museum.

A professor of art at the University of Connecticut for thirty-two years, Fawcett sees the museum collection as source material for his artwork. “I’m not interested in nostalgia,” he explains. “I’m interested in aesthetics.” His drawings and paintings transform the pop-culture imagery of his collection with anamorphic and laser distortions. “My work is about color interaction and artistic process; it’s not about a mouse that is the symbol of a theme park in Florida.”

The collection originated in the 1960s when Fawcett picked up some bubble-gum cards and a comic book at a five-and-dime. Inspired by the imagery, he called his mother and asked for his childhood drawings of comic characters. The memorabilia of his childhood years fascinated him, and is still the basis of the museum collection. “I am always looking for stuff from before the time I was born and from when I was a child in the 1940s. It’s my visual reference.”

Fawcett scours flea markets and eBay regularly for new acquisitions. Original artwork and folk art, such as these one-of-a-kind wooden marionettes, are his principal focus. “Originals are much more interesting than the manufactured toys,” he says.

The museum is a cacophonous celebration of characters from American popular culture. A Jabba the Hutt macquette from the George Lucas archives crouches next to a bomb that was adorned with Superman imagery by a World War II bombardment squadron.

Fawcett knows the history behind every piece in the collection. This Italian rug, adorned with Pluto and Mickey Mouse, dates from the 1930s. “Early Mickeys have a white face and little pie shapes cut out of the eyes. If the face is pink, it’s from 1940 on,” Fawcett explains.

Images of cartoon characters making art, as in this Popeye piece from the 1930s, are also of particular interest to Fawcett. “Those coloring books are the artists that taught me to draw,” he explains.

Fawcett gives tours of his museum often, and his paintings can be seen in the adjacent gallery space. “I always say that it’s a toy museum best enjoyed by adults. Bring your grandparents because they grew up with the Lone Ranger.”