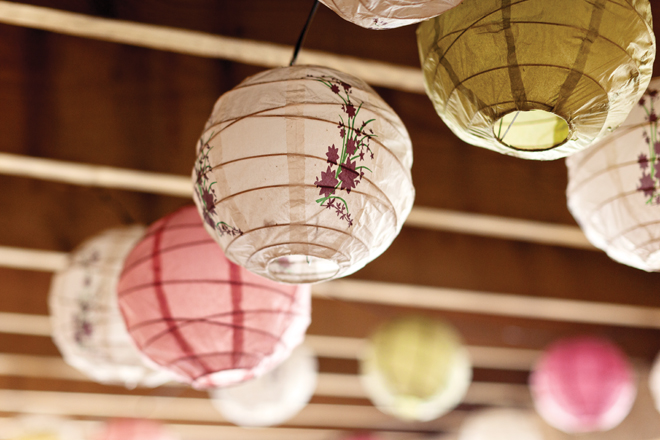 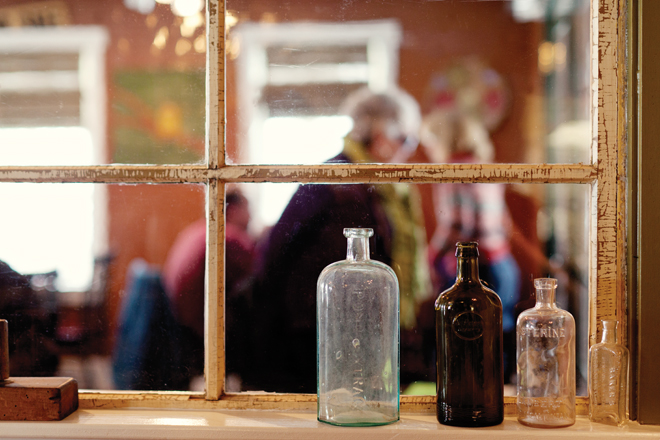 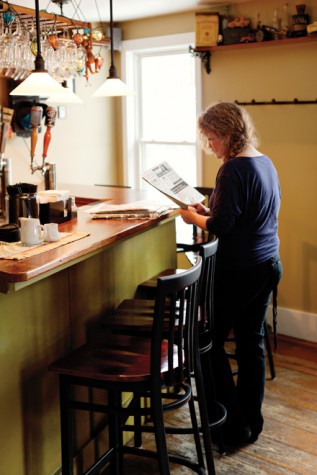 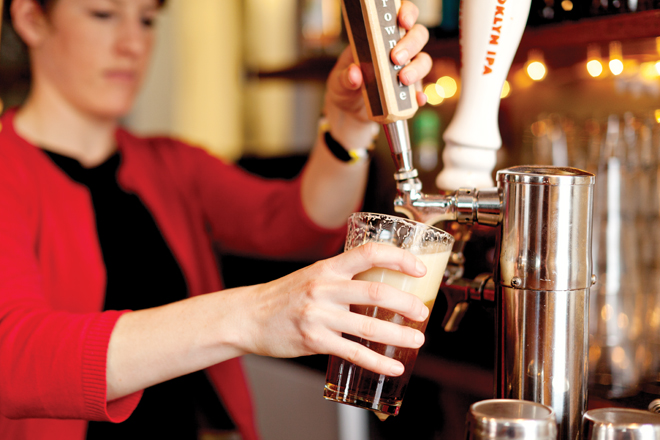 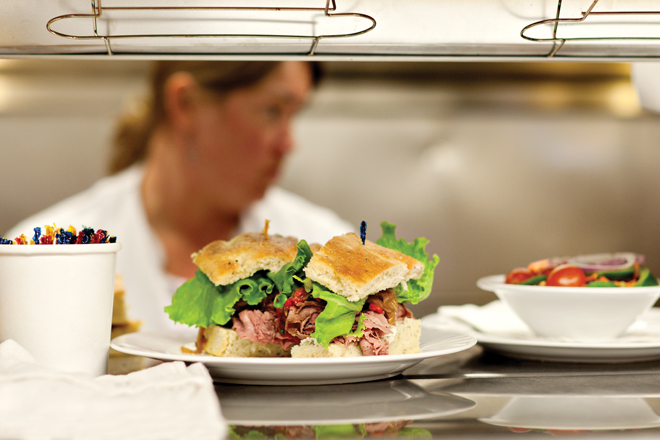 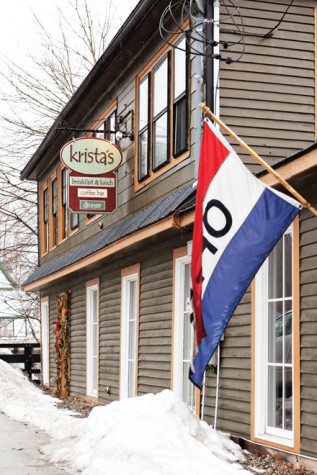 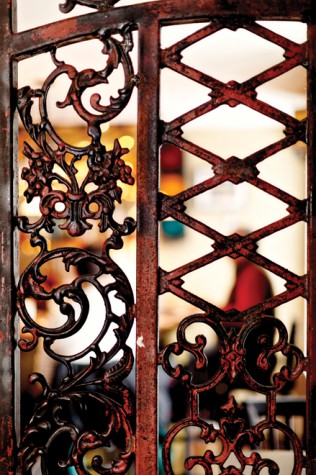 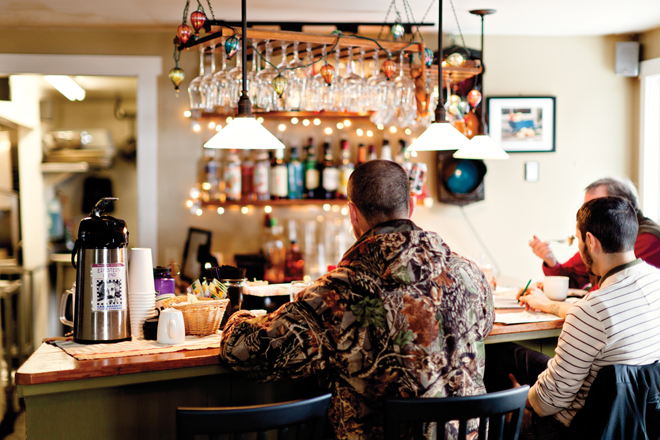 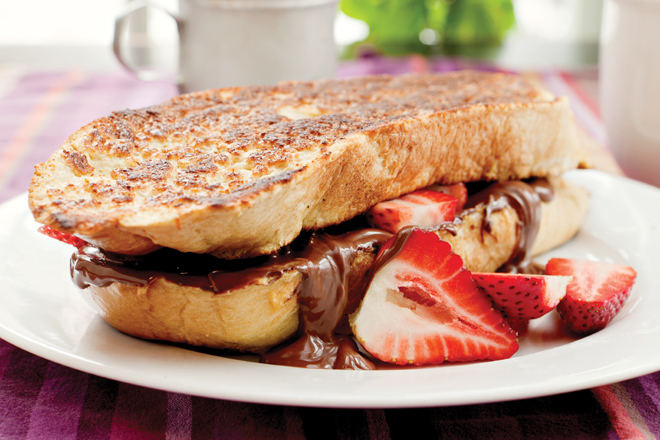 Stuffed French toast proves you can never have enough Nutella. 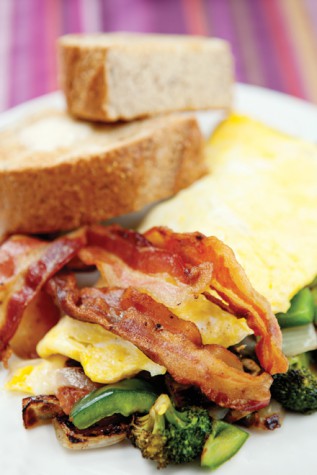 A bacon and vegetable omelet 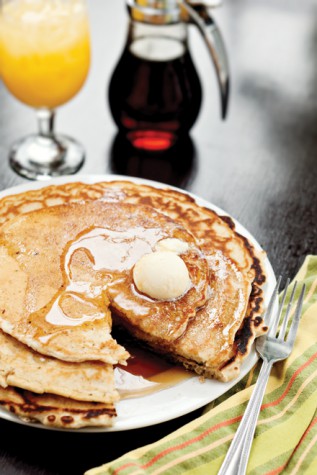 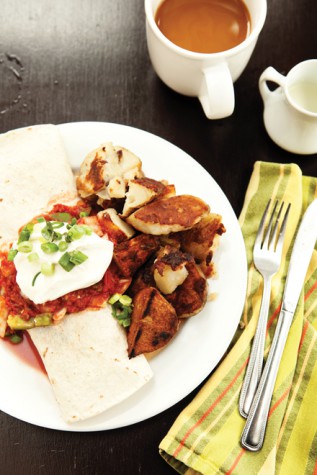 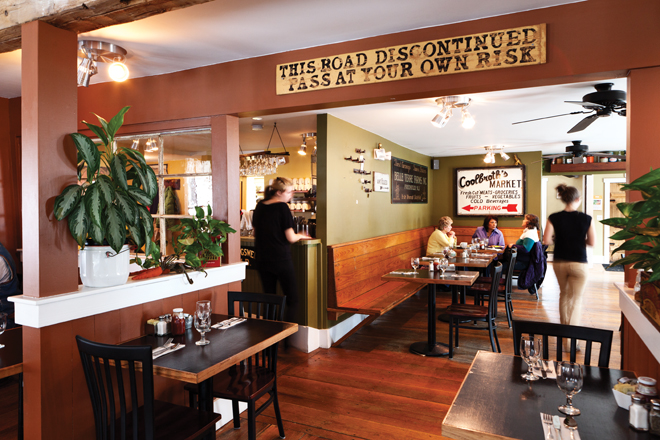 Worth the risk, trust me. 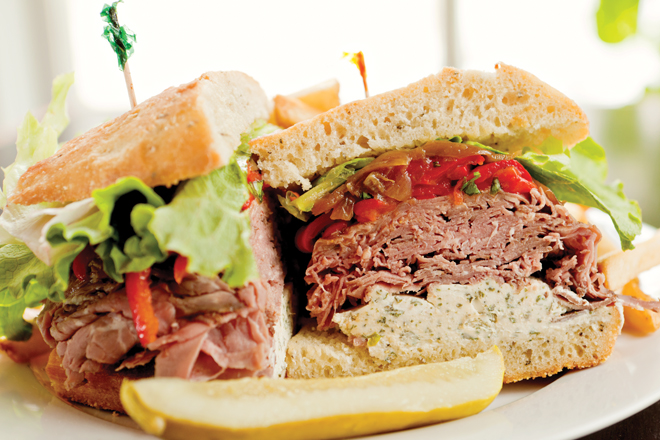 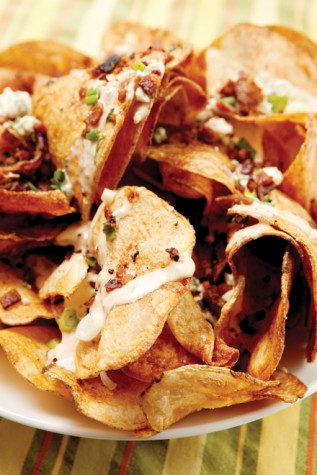 Big Bowl of Chips, the most decadent lunch appetizer ever 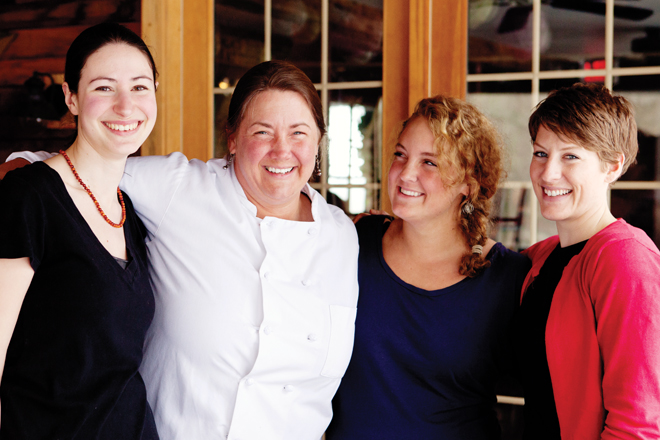 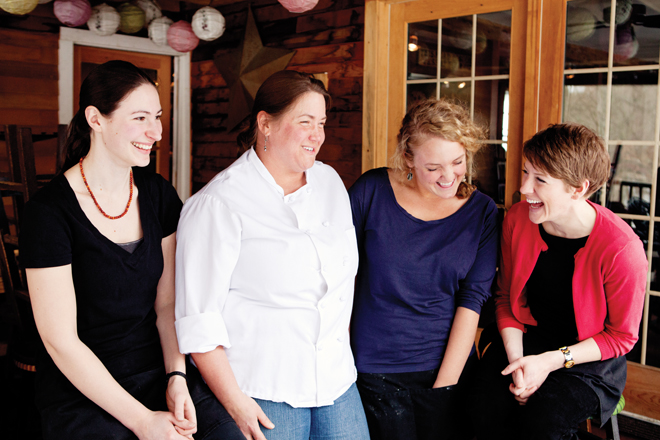 A range of comfort foods has made Krista’s a local favorite for years. Truly an integral part of the Cornish community, you’ll find regulars from many walks of life there, who all agree on one thing—you’ll never leave hungry.

When I meet Krista Lair on a snowy Sunday afternoon at her restaurant in Cornish, she is preparing for her annual “customer appreciation party.” She closes for business, but puts out a generous spread of food and booze, and hires a band that just happens to be mostly composed of the electricians who wired the restaurant.

After explaining that she hasn’t been feeling well all weekend, Lair jokes, “I’d cancel the party, but I have no idea who’s coming!” As she toils over the making of pizzas and desserts, I suggest that maybe a glass of wine would make her feel better. She enthusiastically agrees, and we open a bottle of Shinas Estate’s “The Innocent” Viognier from Australia, partly because of the irony of the name and partly because we both think it’s delicious.

Lair acquired Krista’s in 2006. After completely gutting and renovating the space, she opened its doors in 2007. Aided by an army of devoted and eccentric regulars, it has become a cornerstone of the community—or perhaps it would be more accurate to say that it has become a community unto itself.

When asked how long she has been in the restaurant business, she replies, “since birth.” Lair proceeds to tell the story of how she grew up in a bar in Sugarbush, Vermont. When she was thirteen, her family came to Maine and settled in Limerick, where they opened a breakfast and lunch joint called Jasper’s. As a teenager, she cooked, waited tables, and cleaned. It was during this time, she lightheartedly claims, that her parents “cursed” her with the restaurant life.

After working front-of-house restaurant jobs for several years, she was roped into catering in 1999 “as a favor to a friend.” Her food was so well received that, before she knew it, word-of-mouth recommendations led to a successful catering business. She remained perfectly content as a caterer until 2004, when prospective partners asked her to open a restaurant with them in Cornish. They found a small spot downtown, and Krista’s was born.
“While we were opening, I kept telling myself it was a terrible idea, that no one was actually going to show up, but somehow it caught on,” Lair says. “It’s almost like the whole thing was an accident, and a series of ‘Wow! I had no idea that would work,’ and ‘Wow! I had no idea that would work either!’ I’m basically the queen of winging it.”

The need for more space prompted the move to the new location, and this time Lair designed everything herself. The interior of the restaurant is cozy and inviting, and some regulars have been so enamored with the decor that they have tried to replicate it at home. In addition to the dining room, an outdoor deck overlooking a brook provides an ideal setting for imbibing a bottle of wine (or two) with friends.

Lair has put together a diverse menu and does most of the cooking. During a recent lunch, I order the “big bowl of chips” as an “appetizer” to share with my dining companion. The dish features thin-sliced potato chips with Gorgonzola cream, scallions, and apple-cider bacon. I also order a Murphy’s Irish Stout and a mushroom bacon cheeseburger. Upon arrival, I begin plowing through the heaping mountain of chips covered with hedonistic layers of accompaniments. About a quarter of the way through, I take my first breath and realize that I might be in trouble, as my bodily functions begin to slow down. I look over at my companion and see he is suffering from similar symptoms, prompting us to stop and take a breather.

Soon, my burger arrives, perfectly cooked, and I look at it long and hard. I switch to ice water because my beer is getting in the way. After starting in on the gloriously mushroomy and cheesy burger, I feel a second wind coming on. Sadly, this is short lived, and I am forced to give in to my bodily limitations and admit defeat. My companion has done the same with his Reuben, and all we can do is sit quietly and focus on breathing. As Lair will tell you, “No one ever leaves hungry.”

Krista’s serves lunch and dinner Thursday through Sunday, and breakfast on weekends. Early-morning choices include whipped-cream-topped French toast stuffed with Nutella and sliced bananas. Lunch is heavy on sandwiches, but dinner offers a wide array of options. Herb-crusted prime rib, brown-sugar-brined twin pork chops, and the “special hunk of beef” are among the many dishes served alongside the classic burgers and nachos. Lair knows that keeping customers happy by serving fantastic food is the open secret that keeps them coming back.

Krista’s also has a solid and thoughtful list of libations. “Honestly, if you ask me what my favorite beer is, I’d have to say vodka,” she quips, although you would never know by the range of beers gracing her list. The cocktails she features are simple, but they are made with the best ingredients.

Krista’s is the kind of restaurant that makes everyone feel comfortable—there’s no pretension to be found, and the food doesn’t try to be something it’s not. I stumbled upon Krista’s when Lair graciously hosted a Why Food Matters charity dinner launched by local activist Alex Steed. She stood calmly aside while our group commandeered her kitchen and cooked for forty hungry people.

Krista’s is a reflection of Lair’s character, and for that reason you can count me a regular for life.