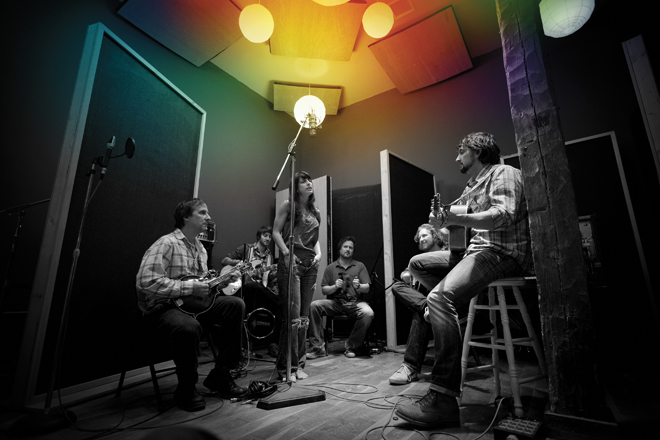 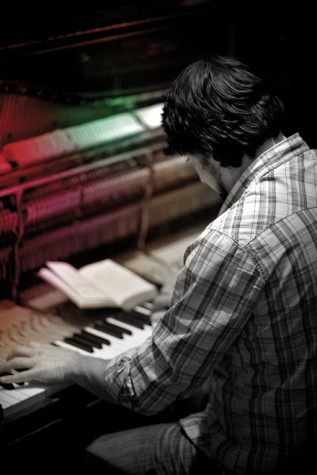 A certain ethos permeates American childhoods: You can become whatever you want to be. Imagination, creativity, curiosity, drive—these are the qualities that matter. Never give up your dream.  But another ethos creeps in later. And for most people it maintains the stronger hold: Stability is what matters. Ownership. A life that’s grounded and secure is the mark of success. Dan Connor of Gypsy Tailwind has lived both lives.

Here is Connor as a child. A young boy raised in upstate New York then in Yarmouth, Maine. A kid who can’t stop picking up instruments, who wants nothing else but to play in a band. Lots of kids fanaticize about a life onstage, but he’s got talent, this one, and finds his way to Berklee College of Music, where he studies voice, piano, and guitar. After college, he forms a band, Goud’s Thumb, which finds some success, even signs with a major label, and now he’s touring most months of the year. His life is the road. You’ve seen the movies. You know the story—and you’ve dreamed, perhaps, of living the same life. You’ve watched the singer onstage, that young guy lost in his song, his gaze wistful and otherworldly, making ordinary emotions seem somehow nobler, deeper. That guy was Dan Connor.

Then came the other part of the story: the label’s disenchantment. The money is drying up, they say. The industry is crumbling. Does this ring a bell? Have you seen this movie? Suddenly that fresh-faced dreamer is a 28-year-old man. He’s sleeping on couches owned by kids a decade younger. His band is broke. It all seems impossible. So he returns to Maine, finds a good job that offers security and a more conventional life. He stops playing guitar. Stops singing. (We can speculate why: If you’re going to forgo your dream, forgo it fully. If you’re going to suppress a part of yourself, for god’s sake, suppress with all your might.) How does one get over the loss of a dream? Answer: By doing something else. Which is just what Connor did. In 2000, he took a job in sales and marketing. “I hustled,” he said. “I became a ‘real guy.’”

But it didn’t hold. “I tried to be that guy,” Connor says. “I did try. I worked like a madman, but I was unhappy in the end.” He knew it was “crazy” at the age of 35, as the father of a young daughter, to consider giving up the stable life he had spent so much time cobbling together. He knew it was ridiculous to

pursue the ineffable dream of becoming a full-time musician, and he fought with himself constantly. Practicality might have won out, except for a recurring nightmare. See, Connor kept dreaming about his own funeral, dreamed he was lying dead in his coffin, and yet he could hear someone giving his eulogy. He could hear someone talking on and on about what a great salesman Dan Connor had been. “What an incredible salesman,” the eulogist declared. At this moment, Connor would bolt awake. Not one mention of music. The dream visited him again. The eulogist’s message always the same.

So what did he do?

He bought a guitar. He began once again what he did as a child—writing songs.

Casually, as if on a lark, he started playing. Soon after, he met Anna Lombard McGeachey, a young Cape Elizabeth native, a vocalist with a luminous stage presence and a soulful, uncannily wise voice. (“When she sings,” guitarist and bandmate Max Cantlin says, “you’re sucked into a vortex of intensity.”) Connor didn’t give up his day job, not yet, though it was increasingly difficult to manage a full- time, high-pressure job while recording his first album with his band. Because—oh, right—he had a band again. He wasn’t just fiddling around in the basement. The dream had become, suddenly and improbably, Gypsy Tailwind.

It’s conventional, here, to describe their sound. I’m supposed to provide a pithy description, to make a few apt comparisons to other bands. But descriptions fail me. Comparisons fall short. The sound is genuine, yes. Unfussy, discursive, earnest, sweet at times. An unpredictable blend of Americana, rock, blues, folk. Yes, yes, yes. But that doesn’t tell you much. Like all good art, it cannot be satisfyingly pigeonholed.

“Wrong and strong,” Connor says. “That’s the sound we’re after. Imperfect, human. Not overcooked, no tricks, the whole sound coming together on one instrument. We want you to feel as though you’re sitting inside the recording—it’s coming from all around, rather than from speakers.”

Wrong and strong feels right to me, too. Perhaps one can only achieve greatness when one forgoes the impulse for perfection.

But is greatness what this band is after?

Albert Camus wrote, “All great deeds and all great thoughts have a ridiculous beginning.” And isn’t it ridiculous to give up a successful career and a regular paycheck? Yet that’s exactly what happened after The Halo Sessions: Connor quit his job. He shook up his whole world—shook up everything and everyone—and embraced radical change. When it came down to it, he says, “I couldn’t forgive myself for not creating. I didn’t want to die with my best stuff in me. You only have so much time.”

And that ridiculously bold move has yielded more than Connor ever expected. Three albums and a solo EP in just three years. A fourth album, recorded in April, is expected out in June. The band charted on Billboard’s Heatseekers list. Sold out Port City Music Hall. Played with Ray LaMontagne. Performed two showcase concerts at South by Southwest in Austin, Texas. Opened Maine’s Nateva Music and Camping Festival last year. And they’re headlining the Kennebunkport Festival on June 4 and playing Camp Creek Festival in Oxford in August. More gigs are scheduled throughout the region. And they have added more band members.

Since 2007, the band has gone through many permutations, including an interim vocalist, Amanda Gervasi (who appeared on the band’s third album, Decades and Days), when McGeachey took a leave of absence to have a baby. But Connor and McGeachey have since reunited. Dow remains on drums. New Hampshire–born Colin Winsor is on bass— he’s described by his bandmates as a young spirit, the “little brother” who will blow you away with his insight and talent. Guitarist Max Cantlin, who grew up in Camden, brings a quiet, introspective centeredness and expansive musical versatility. And there’s Ben Trout on mandolin, a New York City native. While he’s the newest member, he’s not new to music (far from it). Described by the group as “hypertalented, humble, a leader without trying,” he’s the guy “always ready at first call.”

Connor brings his songs to this group, and together they bring the songs to life. Over the last few years, the themes of Connor’s work have changed. His older songs were primarily mediations on love or the loss of love. But lately he’s found himself writing songs about acceptance, happiness, forgiveness, legacy. It’s harder, he says, to write happy songs, and yet he finds himself compelled to explore the depths and dimensions of happiness. As a father, Connor says, he is always thinking about the messages he is passing on to his daughter: “I want to explain to her: when you’re old and I’m gone, you’ll know something about why I followed this path. You’ll know you can’t ignore your creativity. You’ll know that accepting who you are is the trick of life.”

Gypsy Tailwind plays songs about life, about its tricks, pains, and joys. On one cold, drizzling evening in March, I’m invited to watch and listen as their songs unfold. The band rehearses in a garage studio in South Portland. They come together like a family comes together—effortlessly, naturally. During their rehearsal, the atmosphere feels serious yet playful. I sense that blend of acceptance and irritation and candor one usually only finds at family dinners.

To warm up, they launch into “The Long Drive Home from Montreal.” Connor, accompanied by McGeachey, sings:

It’s a long drive home from Montreal
I could see your face Coming up from the road
When I stare into those lashly eyes
I know the place I’ve got to be
With you laying next to me…
Won’t you wait, wait for me, wait for me?

This last phrase is ardent, earnest, powerful. Whatever was on Connor’s mind when he wrote the song, I feel, somehow, like he’s not singing to me or to his audience, but to music itself.

After the song concludes, the group debates. They laugh at each other, nudge each other, debate some more, try it again. Watching them, I am struck by their sibling-like mood and mannerisms. These are experienced musicians, people who have lived full and complicated lives. They’re not naive. And yet when they come together like this, their earnestness is palpable, and their unrestrained curiosity reminds me of childhood—of brothers and sisters inventing new worlds together, building something, and then, when it’s done, grinning at each other. They are full of impatient wonder. They are in the midst of serious play. And they want only one thing: to do it again.