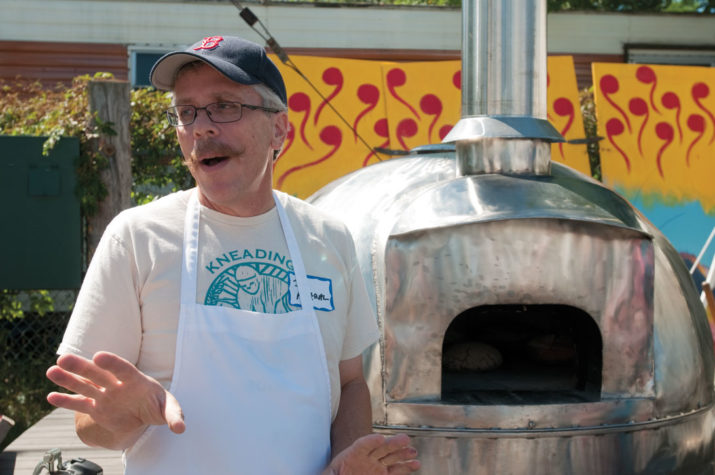 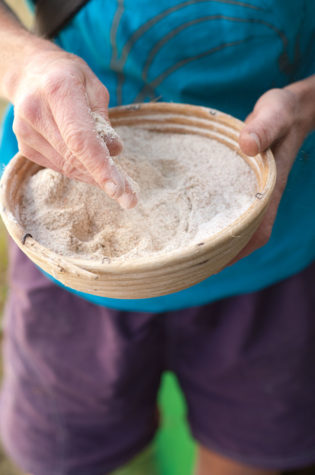 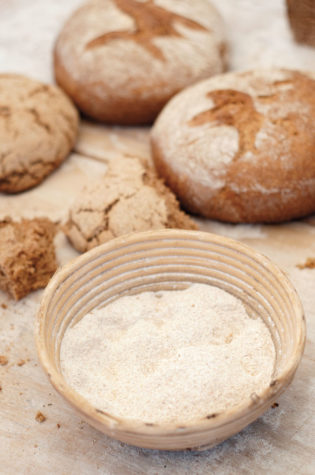 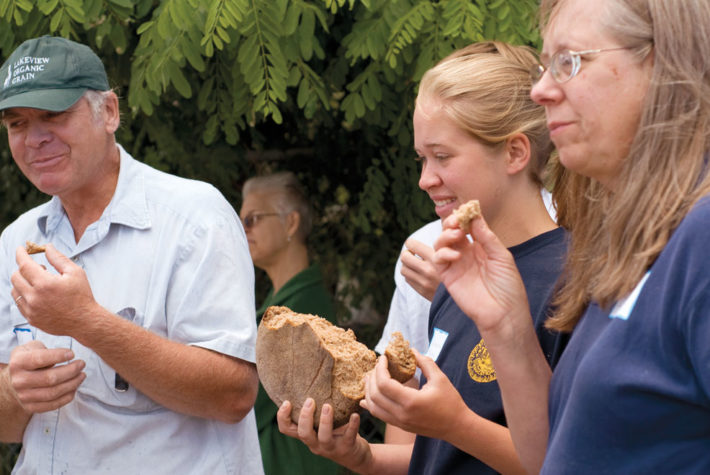 The Martens family of New York samples bread made with Maine-grown wheat. 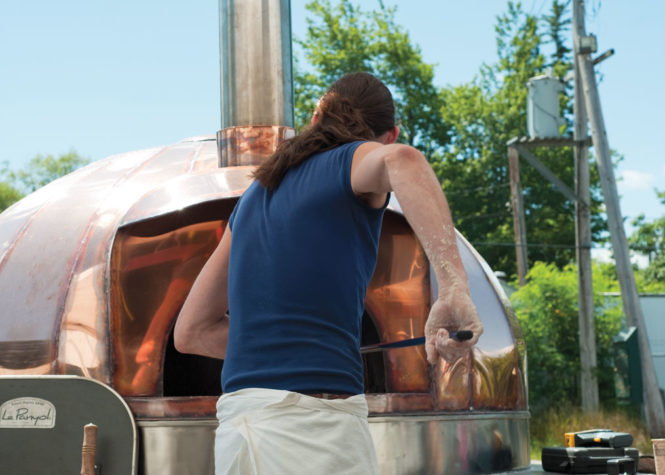 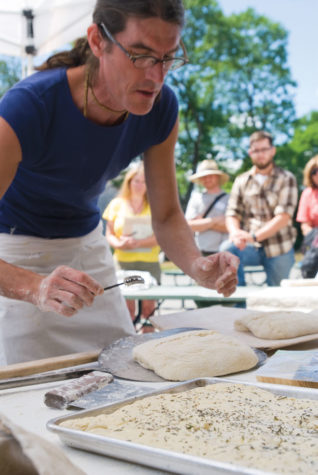 Miscovich uses a razor blade to slash dough during a demonstration.

Two visionaries from Skowhegan set out to build a wooden gristmill with hopes of encouraging bakers to use locally produced grain.What emerged from their efforts was the Kneading Conference, an event that celebrates every aspect of artisan bread.

Across Maine, a growing number of towns have been struggling economically, made visible by empty storefronts, abandoned houses, and for-sale signs. A progressive few have taken a closer look at the economic sustainability of their communities and are making concerted efforts to restore what’s been lost. Amber Lambke, a resident of Skowhegan, gave up her job as a speech therapist to help revitalize her town.

Lambke grew up in Brunswick and earned a master’s degree in language pathology. She met her husband, a doctor, at a contra dance, and the two moved to Skowhegan about ten years ago. They quickly befriended a number of locals concerned about the town’s future, many of whom were masons and bread bakers. Together the group created the Kneading Conference, an event that would bring farmers, bread bakers, pasta makers, and wood-burning-oven enthusiasts together to celebrate an industry that had been all but lost in Maine: wheat cultivation. Lambke and cofounder Michael Scholz understood that revitalizing a lost grain economy would require a gristmill to process the chaff and wheat seeds from bulk grain. The two went on a quest along the East Coast in search of a miller that would consider moving to Maine and setting up shop. They had no luck and realized that, if they wanted the job done, they would need to do it themselves. Lambke took a milling course in Kansas, and together they raised funds to buy the old Somerset County Jail, which had been vacant for some time. Not only did the former jail become the home for their beautiful new wooden gristmill, but it is quickly developing into a center for sustainable agriculture.

After three years, the Kneading Conference outgrew the church where it began and moved to the Skowhegan Fairgrounds—the oldest continuously operating agricultural fairgrounds in America. A corner of the lot has been converted to a “wheat trial,” or a demonstration wheat field, adding authenticity and purpose to the Fair’s mission. The two-day conference includes workshops, presentations, and panel discussions that focus on the art of handcrafted breads, wood-fired ovens, wheat farming, milling, and much more.

Attendance is limited to 250 people, from professional bakers and bread-baking hobbyists to work-study students, food entrepreneurs, and wheat breeders.

The conference is held during the busiest time of year for professionals in the food business—the height of summer—and, still, tickets typically sell out by mid-June, after which the registration fee increases. This year’s keynote speakers include Michel Nischan, a chef and restaurateur and the CEO of Wholesome Wave, a nonprofit organization that promotes whole foods, and Nina Planck, a fierce proponent of traditional whole foods and author of Real Food: What to Eat and Why. Other speakers include Jim Amaral, the owner and founder of Borealis Breads, Albie Barden, a master mason and cofounder of both the Common Ground Fair and the Kneading Conference, and Jeffrey Hamelman, the bakery director for King Arthur Flour. People come from across the country and beyond to share their love of artisan bread and the culture that surrounds it.

Following the conference is the Maine Artisan Bread Fair, which is free and open to the public. People come from all over Maine, and even Canada, to sample fresh-baked artisan bread, learn about building wood-fired ovens, discuss baking equipment with professional bakers, and listen to live music. The first year, the local population showed up in droves and the bread vendors sold out in less than an hour. Two years later, the bread bakers still sold out halfway through the Fair, a good sign for those entering the bread business in Maine. Wendy Hebb, the event’s organizer, anticipates that well over 3,000 people will attend this year—a testament to Maine’s support for local agriculture.

Although the Kneading Conference lasts only two days, it has had a lasting effect on its participants. After attending the conference, Kevin Cabrera returned to his native state of Hawaii and completely changed the mission of his dinner-roll business: he moved away from plastic-bag-wrapped, factory-produced dinner rolls to artisan breads. Bob and Mary Burr of Blue Ribbon Farm in Skowhegan, the owners of Pasta Fresca, plan to source their grain from the new gristmill, which will be in full operation this fall. Many of those who attend the fair return home to build their own wood-fired ovens and share the experience with their friends and family.

The goals of the conference are to keep farmers on the farm, preserve the natural landscapes of Maine, and bring together a community of people who recognize that agriculture can be a cornerstone of the local economy. In Somerset County, Lambke and Scholz aim to create new economic opportunities for local farmers and those selling value-added, grain-based products. On a state level, they hope to be an economic model for other communities in Maine and prove that grain is still one of our staple foods. And nationally, they want to pave the way for other local milling projects. It appears to be working: their project has already inspired the Kneading Conference West, located in Mount Vernon, Washington, which will take place this September.

Building a new grain-based economy in central Maine will have to reverse a long historical decline. After the 1850s, the state’s milling infrastructure and expertise largely disappeared when the new railroad system started delivering cheap Midwestern grain to Maine. Over time, the knowledge and equipment that allowed the state to grow and mill an assortment of grain was lost. Today, most of the milling operations in the United States are white-flour production mills, even though other varieties of grain have a richer flavor, a greater nutritional value, and a more satisfying texture than white flour. Many “locavore” advocates recognize the many benefits of whole foods, which is why they are campaigning to change the way we eat. Jim Amaral of Borealis Bread has been using local grain for more than a decade because, he says, it significantly enhances the quality of his products. Tinder Hearth Wood-Fired Bread, a bakery in Brooksville, uses a stationary bicycle to grind wheat berries from Aroostook County. The new gristmill in Skowhegan, the only former jail in the country that has been converted into a mill for the benefit of the local community, will add even more momentum to the growing movement.

Beyond raising awareness of sustainable living, promoting locally sourced food, and fostering greater cooperation within the community, the Kneading Conference has brought hope to a town that has suffered from rising unemployment and a real hunger problem. The conference has helped brand Skowhegan as a community of innovation that is combating economic hardship with bold ideas and a revitalized agricultural industry. And it shows that a determined few can enrich the lives of thousands.