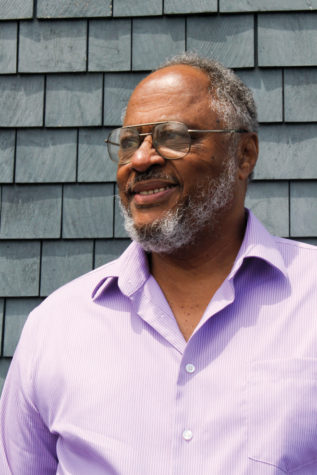 As a Journalist, what are some of the most memorable events you’ve covered?

I was at Martin Luther King Jr.’s funeral. I’ve covered airplane crashes. I’ve covered floods on the Mississippi river, jailbreaks. Since 1974, I’ve been in tennis, and I’ve covered some of the biggest games.

How did you become a Tennis writer?

In 1969, I was writing sports for the Associated Press in Milwaukee and a tennis tournament came to town. And I went out and covered it. It wasn’t until years later that I realized it was the Handsome Eight and the beginning of pro tennis. So I was in the right place at the right time. In 1980, I was named the Associated Press tennis writer, and I started covering all the major events, including the French Open and Wimbledon. I will be attending my 32nd consecutive US Open this fall as a writer.

Is there anything in particular that stands out in your career?

The person who changed my life was Harry Truman. I was living in Kansas City at the time, writing for the Kansas City Call, which is a black weekly newspaper. Sammy Davis Jr. came to town and he was supposed to go visit the president at the Harry S. Truman Library, so I went out to cover it. When I got there, the president’s secretary informed me that Sammy Davis Jr. was ill that morning and couldn’t make it. So, since I’d made the trip with the photographer, I asked if we could see the president and she said, “Of course.” I went in and talked to him for about 45 minutes and, on the way back to my office, it dawned on me: here was a former president of the United States, and he could have said the most important things in the world during our conversation, and no one would know it if I didn’t write about it. It gave me a whole different outlook on my profession.

In addition to your career, you’ve done some extensive research into black history in Maine. How did that come about?

My children were all born in the Midwest and they didn’t know my New England relatives outside of my parents. My son asked me if he had any cousins, and I had to laugh because he had loads of cousins. That started me on my genealogical search. I’m at least the eighth generation to be born in Cumberland County. I can go back to the marriage of my five-time great-grandparents in New Gloucester in 1783. Where they’re from, I don’t know. Maybe I’m more than the eighth generation born in Cumberland County.

What are some of the most interesting things you’ve discovered?

Blacks have participated in all of the wars Maine has been involved in. Even in the Maine regiments that fought in the Civil War we’re finding there were quite a few blacks. In some cases, they would say that there were blacks in the outfit, and they would name them. But it was like a line or two in a book.

You’re also involved in a number of organizations around the state.

Yes, I’ve been on the board of the Maine Philanthropy Center for six years. It’s been a fascinating experience and an eye-opener for me personally because I knew nothing about philanthropy before I got on the board. And I’ve met some marvelous people who are board members—I don’t know how this state exists without them. I’ve been fortunate. I’ve worked in a lot of places. For a little boy from Munjoy Hill, it’s been a fantastic life.