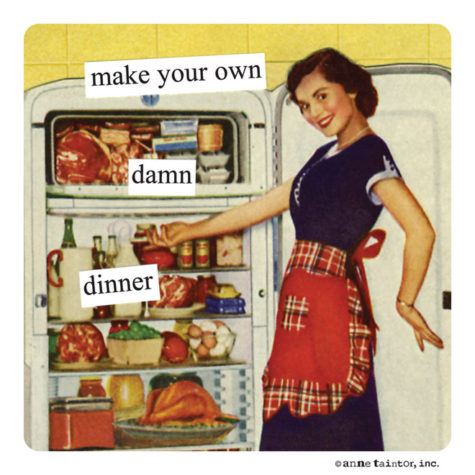 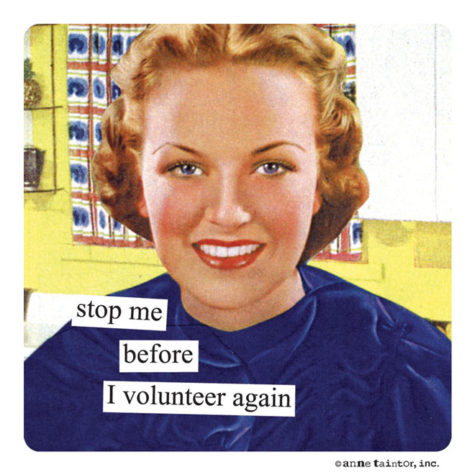 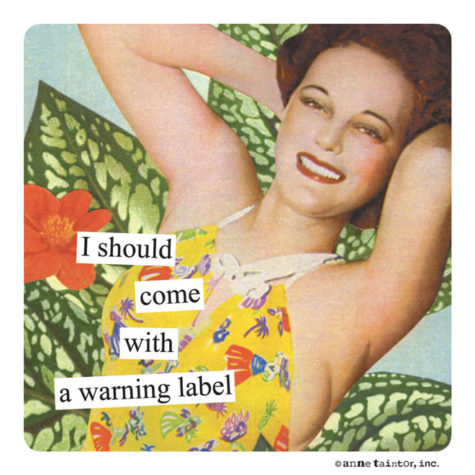 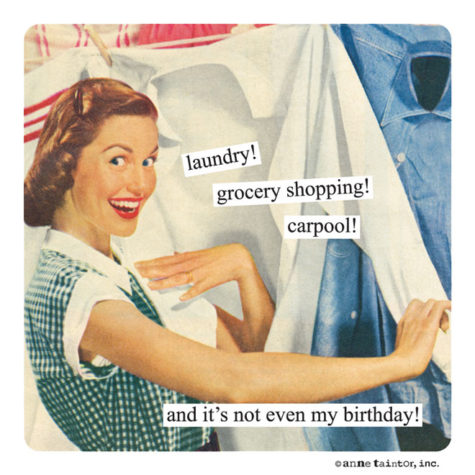 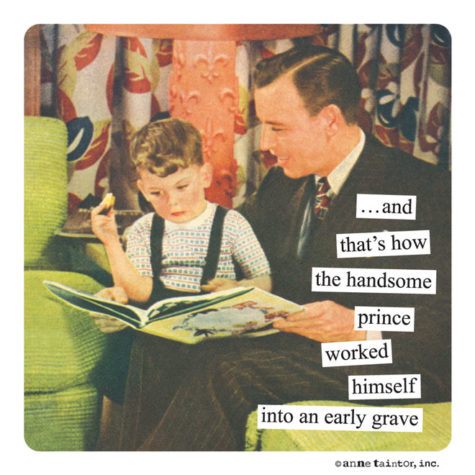 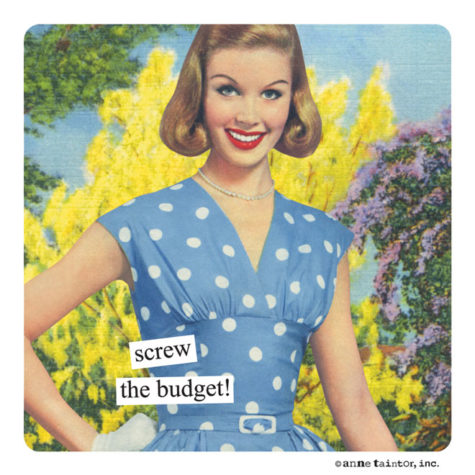 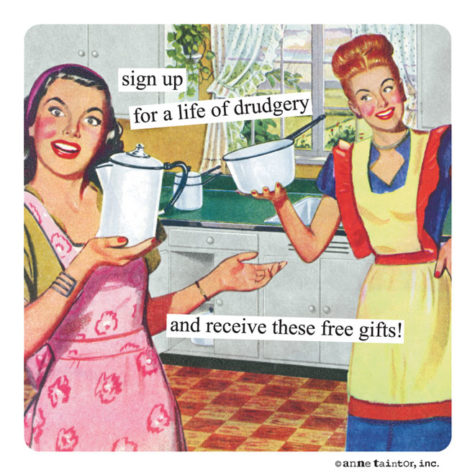 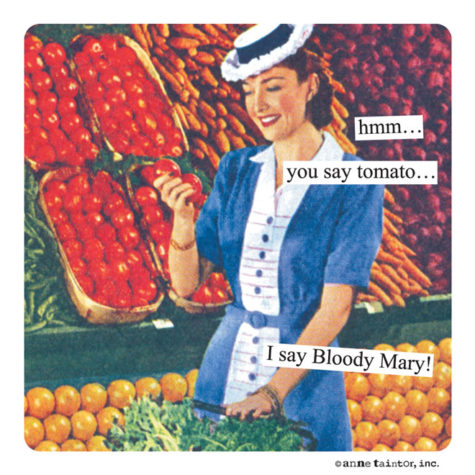 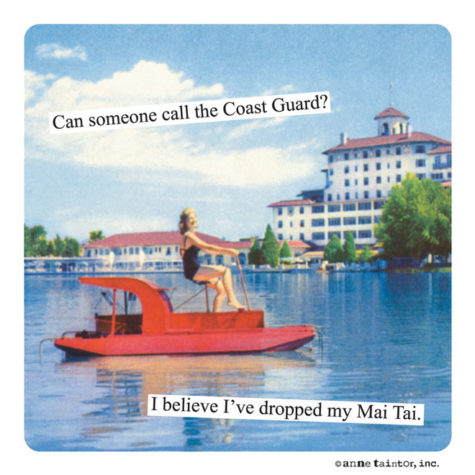 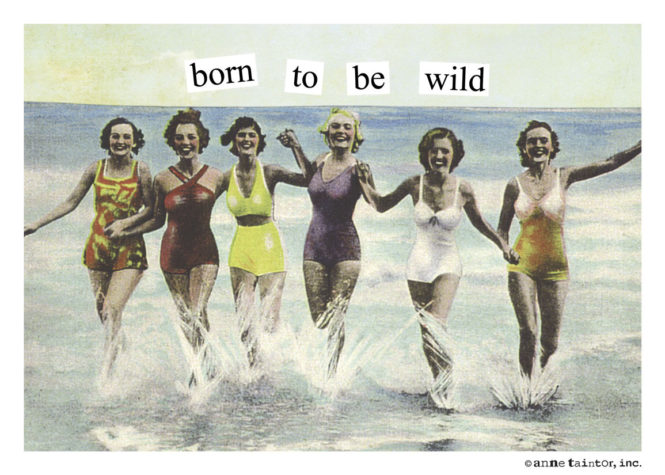 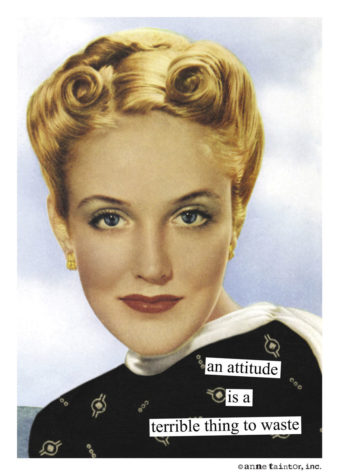 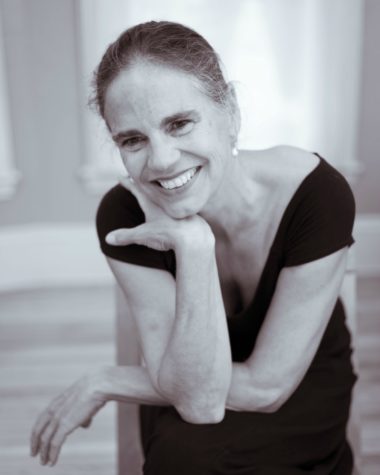 Anne Taintor's goal is to make smart people smile. But first and foremost, the artist must make herself smile. After more than a decade in New Mexico, Taintor is now living and working in Maine. "I love being near family, I love the convenience of everything, and my neighbors are great." 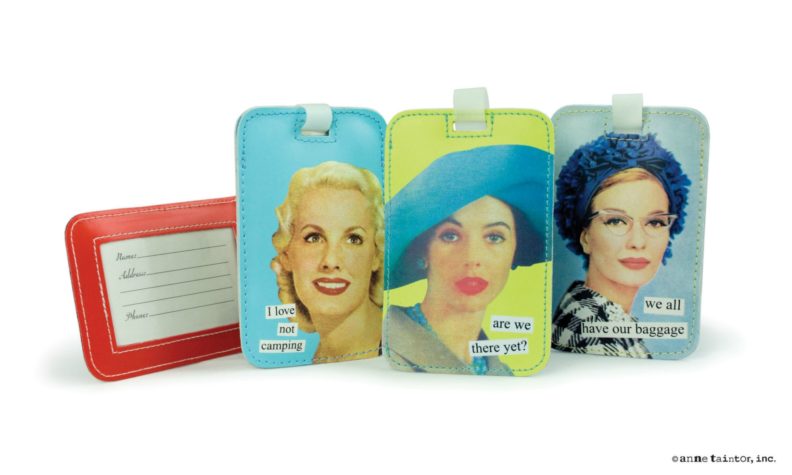 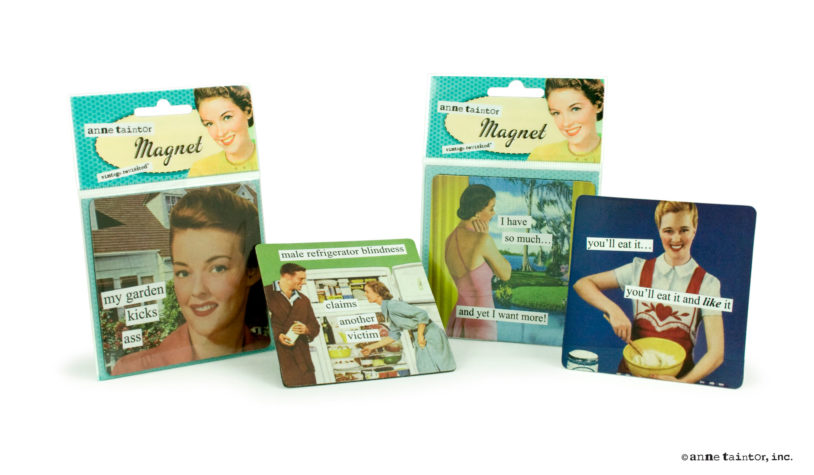 An attitude is a terrible thing to waste. The life and work of Anne Taintor.

Why yes, I am that kind of girl

Do you call yourself a feminist? And yet long a little wistfully for the days when women looked like Joan on Mad Men? Tired of earnest Hallmark cards? Think the only way to get through life is to embrace irreverence?

If so, there’s a good chance you have an Anne Taintor magnet stuck on your fridge. Or maybe you own an Anne Taintor luggage tag, mug, notepad, coaster set, or (best yet) flask. Or you’ve received one of her greeting cards from one of your irreverent feminist friends.

Though often quoted and copied (there are plenty of impersonators out there), Anne Taintor is the originator of the snarky vintage product. Sold at boutiques and card shops all over the world, Anne Taintor’s goods feature images of “traditional” American women—coiffed, starched, impossibly cheerful models from the 40s, 50s, and 60s—juxtaposed with cheeky captions suggesting their real inner thoughts. A woman in formal wear, a dark-haired Betty Draper, holds up a platter of home-cooked food. Her frozen smile dazzles. The caption beneath reads: “The secret ingredient is resentment.” Another woman waves a game-show hand at an open refrigerator. Caption: “Make your own damn dinner.”

Taintor isn’t the perfectly coiffed, false-eyelash type. Far from it. One has a hard time imagining her slaving away in a ruffled apron. She is strikingly modest, self-effacing, and funny. She’s also a Mainer. For 25 years, this Lewiston-born-and-raised artist has been “making smart people smile.” And after more than a decade in New Mexico, she has returned to her home state.

Someone was going to have to set a bad example

In Lewiston in the 60s, Taintor lay awake at night worrying about becoming a woman. She feared growing up, suspected she would fail at a conventional life but couldn’t imagine an alternative path. “As far as I could see, my options as an adult woman were limited. I could be a housewife, a teacher, or a nun. Or a movie star. And I didn’t think I’d be much good at any of those roles.”

After high school, Taintor went to Harvard University, where she earned a degree in visual and environmental studies in 1977. A few years later, she found herself back in Maine, now a single mother struggling to make ends meet—waitressing, creating visual art when she could (“I was making my little things,” she says, with characteristic humility), and longing for more time with her daughter.

Taintor credits the Maine Festival—a performance and craft venue—as the launching pad for her business. She had sold her work at retail craft fairs before, but at the Maine Festival she found an audience positively hungry for her merchandise. Customers clamored for her goods. She recalls her mistaken belief  that her humor would be appreciated only by those of her generation. Turns out you don’t need to be raised by Donna Reed to appreciate Taintor’s sly reconception of classic images.

After that year’s Maine Festival, Taintor took the plunge and quit her waitressing job. Now, 25 years later, she boasts a wide and ever-growing product line, a support staff, and a thriving seven-figure business. Her products are sold at more than 3,000 stores in 25 countries.

But wait. We’re forgetting the middle. This isn’t one of those stories about a magic transformation; it’s a story about work. About perseverance. About that fine line between forbearance and surrender. It’s about staring doubt in the face and then doing it anyway. For Taintor, it wasn’t always a smooth ride.

Five years into the business, for example, while she was exploring ways to expand, Taintor turned for advice to a mentorship organization where retired executives shared wisdom with entrepreneurs. She recalls their message: “They told me, ‘This is foolish; this is impossible; this will never work.’” Heartbroken, she called a friend (now her husband) who said, “Anne! But you’ve already been in business five years!”

You also have to want it. Bad. “Work harder for yourself than for anybody else,” she says. Early in her career, she felt enormous longing to spend time with her young daughter. A job—any job—would take her away from her child for long stretches at a time. Suddenly, the stakes were high. Failing wasn’t an option. “If I didn’t meet every challenge, I knew I’d have to get a job. And when I had a job, I never saw my daughter…A challenge would come up and I’d say, ‘Oh no! I can’t!’ But then I’d do it.”

This, it turns out, is another hallmark of Taintor’s personality: an unaffected humility and directness. You can’t not like her. You can’t help but be struck by her warmth and candor. She seems at once exhilarated by her success and slightly, charmingly startled by it. And somehow this dimension of her character comes across in her work. A deep knowingness. A sense that we’re all inhabiting this crazy world together. When you’re in the store and you reach for a magnet or a greeting card or pill case, it feels like you’re sharing a joke together, you and Anne.

Recently, to celebrate the company’s 25th anniversary, Taintor launched a caption contest on her website, inviting fans to submit their own subversive, irreverent captions. The contest is a forum where edgier, boundary-pushing taglines flourish, helping Taintor stay true to her roots.

Her personal favorite? A fresh-faced boy smiles at his beaming, apron-clad mother. He’s holding his metal lunch box (containing, no doubt, homemade goodies she slaved for hours to make). It’s an image that epitomizes mid-twentieth-century domestic order. Taintor selected this winning caption, submitted by Anne Gilot: “Mommy, when I grow up I want to be a pimp.”

If by “happy” you mean trapped with no means of escape…? Then yes, I’m happy

For more than a decade Taintor lived in rural New Mexico, “in the heart of Georgia O’Keeffe country.” Her company’s main office is in Brooklyn. She’s got staff in California. These days, Anne Taintor can live and work anywhere. She’s chosen to return to Maine, and she moved to Portland’s Stroudwater neighborhood in June. “We bought a historic house with no closets, no light fixtures, and almost no heat…but lots of charm,” she says. Although some of her favorite childhood haunts don’t exist anymore (she laments the closing of Raoul’s Roadside Attraction), her best friends and family are still here. She’s thrilled to live in a “little city” again, to return to the state that nurtured her early in her career, and to take part in the demographically richer and more multifaceted Maine life. She’s impressed by how much more diverse the state’s population has become—especially in Lewiston and Portland—in the years since she’s been away.

Another lure? Maine yard sales, naturally, where she snags vintage magazines containing the images at the heart of her work. “Maine is such a great source for old magazines,” she says. “I got my first stack of old Ladies’ Home Journals at a yard sale in Willard Square in South Portland. You just can’t find old magazines in New Mexico—since it was settled so much later and the people weren’t English speaking. Yes, I’ll go to eBay, but I’m old-fashioned: I love Maine yard sales.”

That’s not to say the state is perfectly suited to Taintor. But her musings suggest that her sense of humor has withstood the transition: “When I left 11 years ago, I swore I’d never live in this freezing state again. I’m not looking forward to the endless winter. And I am having a hard time readjusting to humidity; I feel as though I’m living in a Dali painting.”

So welcome back, Anne, to the land of great vintage magazines, cold winters, old friends…and melting clocks. It’s about time.