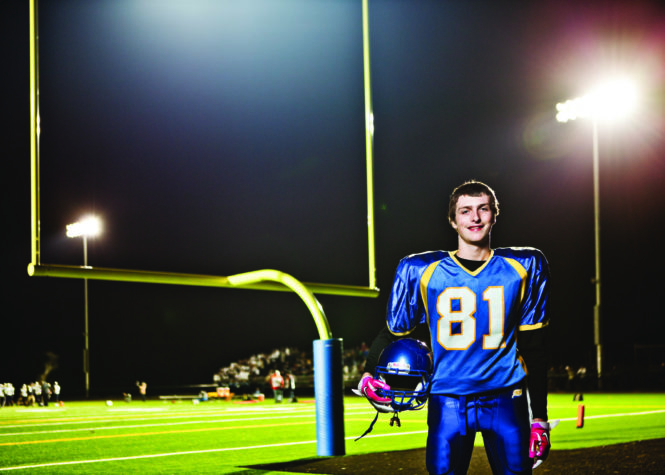 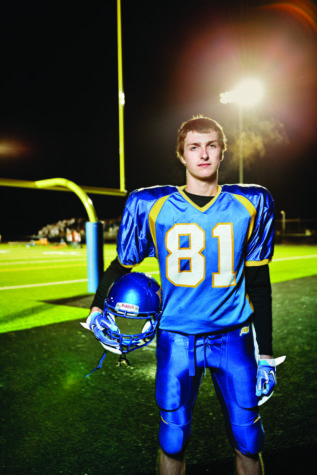 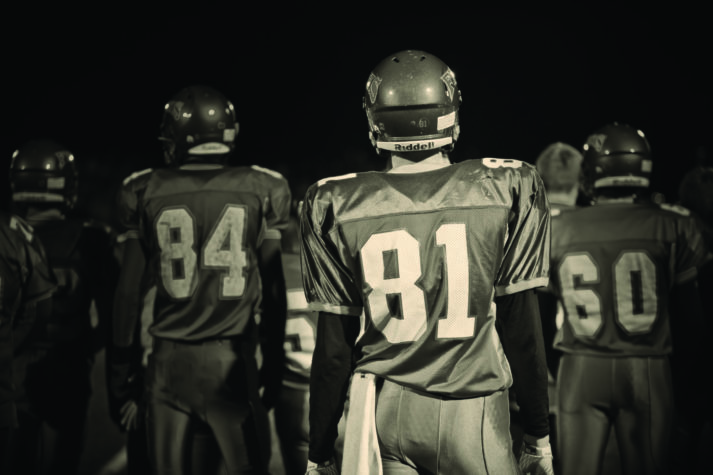 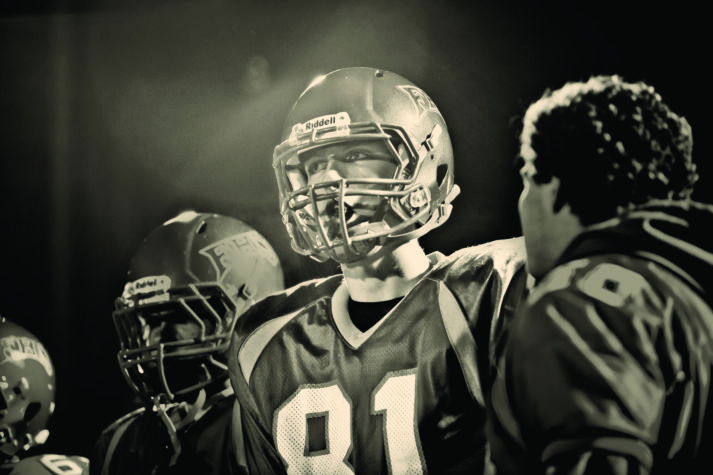 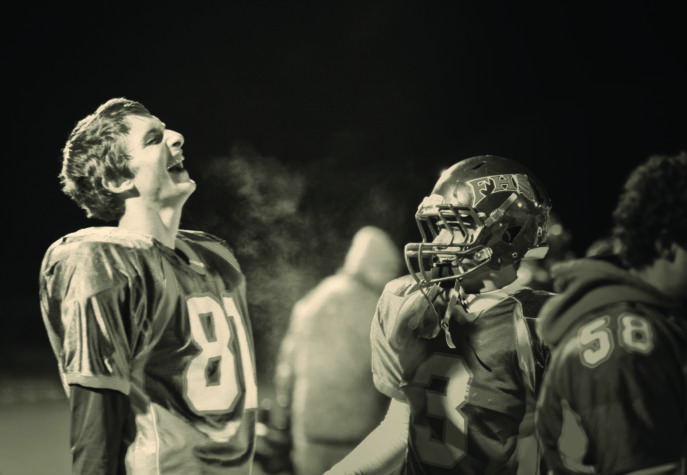 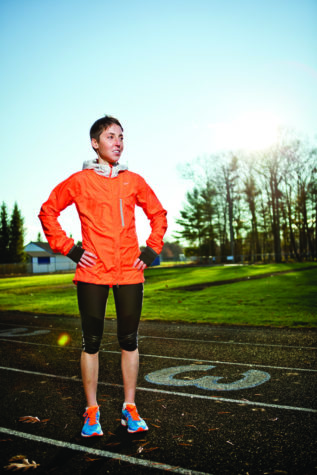 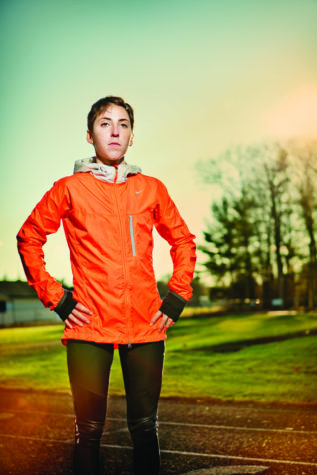 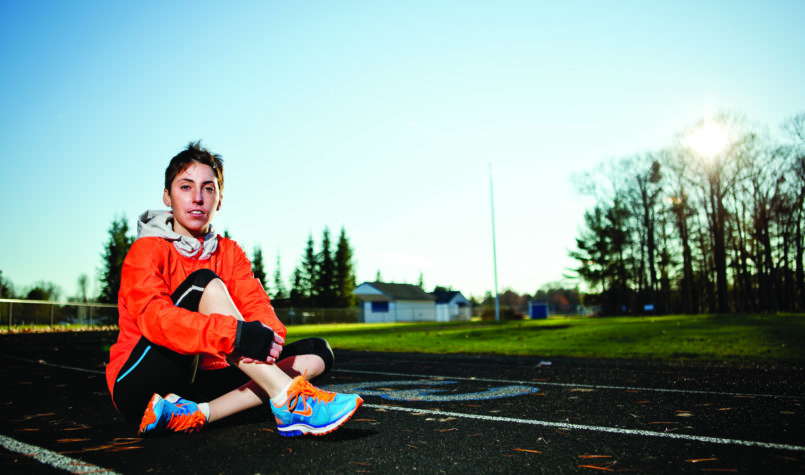 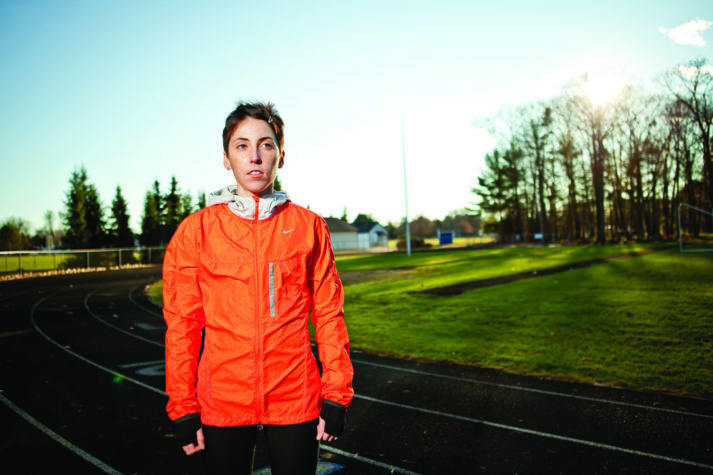 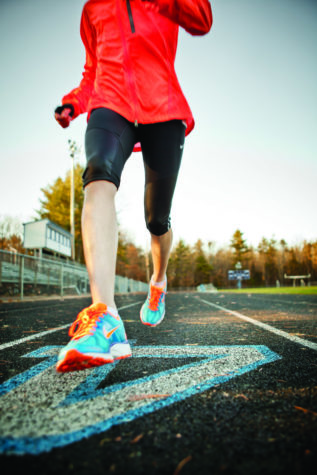 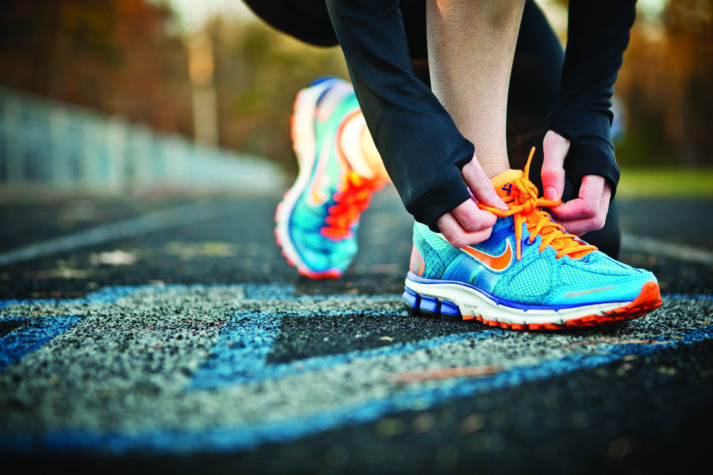 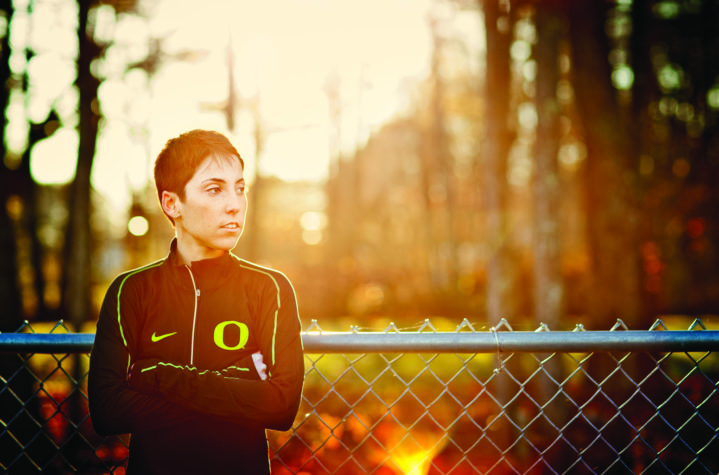 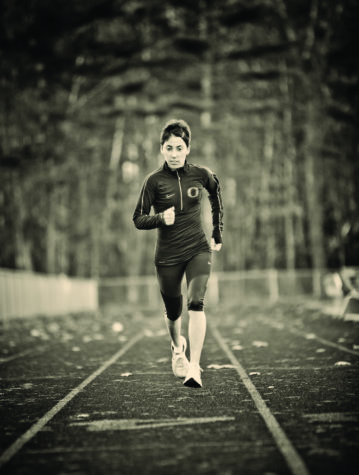 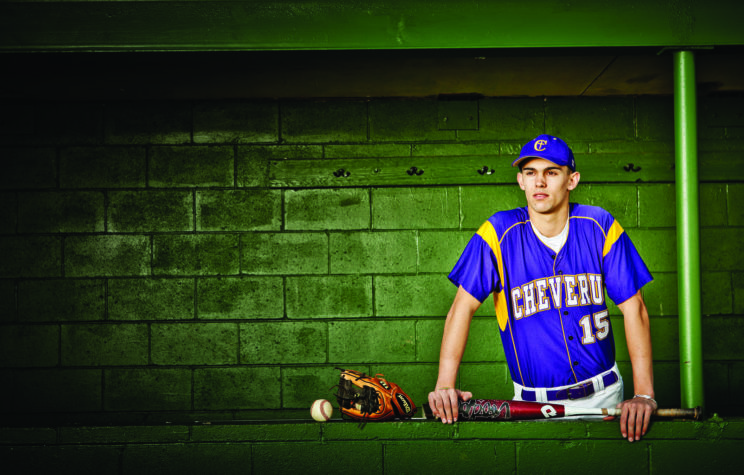 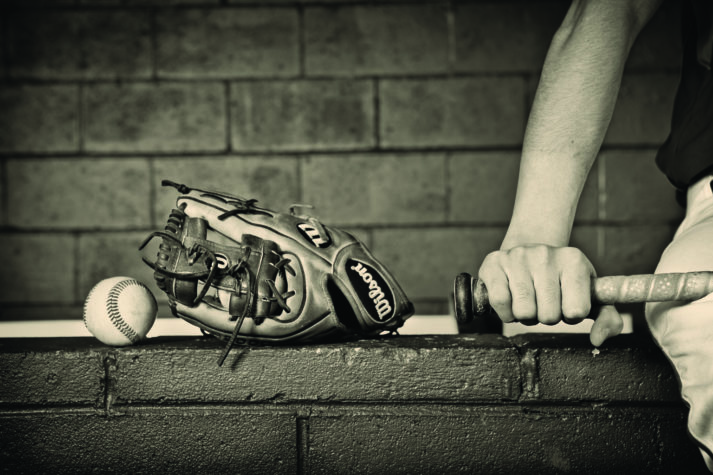 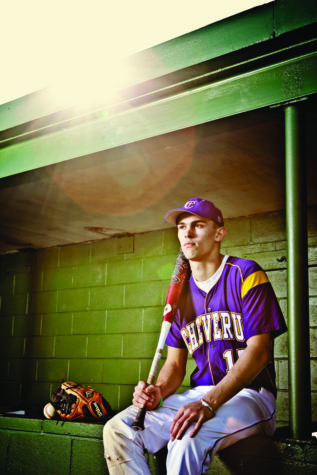 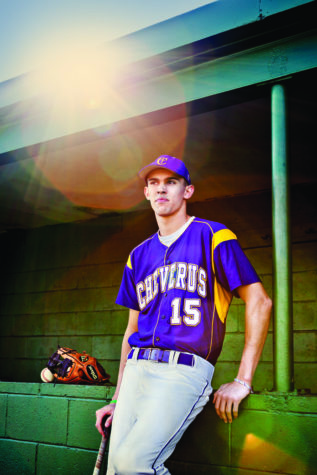 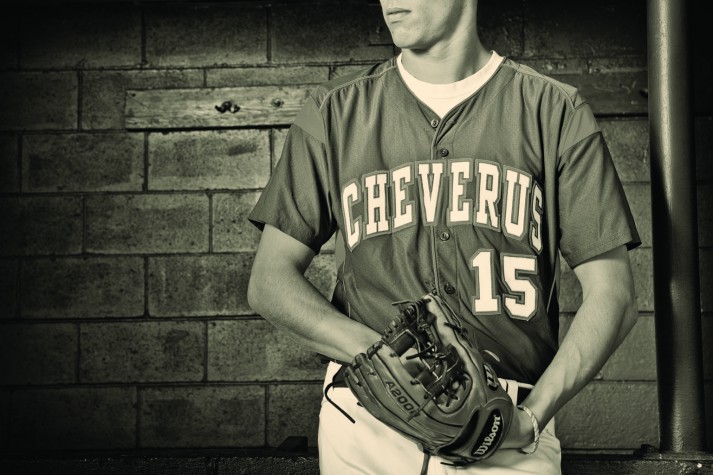 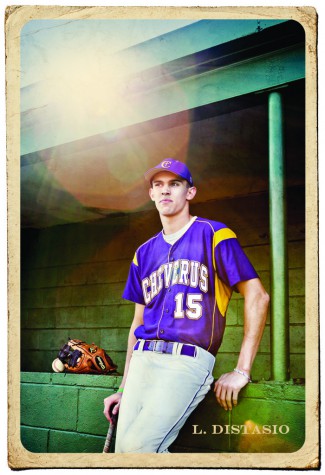 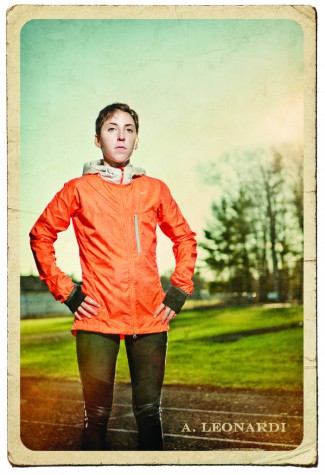 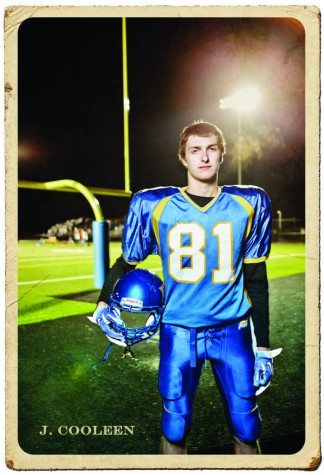 The Threat, the Record Breaker, and the Natural

As a child on Long Island, New York, Jack Cooleen played soccer, lacrosse, basketball, hockey, and baseball. He moved to Maine in third grade. In seventh grade, he began to play football, the sport he excels at today and that regularly lands him in the pages of local newspapers. As the record holder for the most receiving yards and touchdowns in Falmouth High SchoolÕs history, Cooleen, in his junior year, was named FalmouthÕs first ever All-State player by the Maine Sunday Telegram. He went on to make All-Conference three years in a row in football, basketball, and lacrosse. The Portland Press Herald called him Ò…one of the few receivers defense has to include in their game plan.Ó Last season he averaged 18 yards per catch and scored 14 touchdowns.

Coach John Fitzsimmons calls him “one of the most gifted athletes to play football for Falmouth High School.” A collection of Cooleen’s highlights on YouTube plays like a reel from ESPN—the number 81 on his back is a blur dashing across yard lines and catching the ball one-handed, seemingly mid-flight.

At the 250-year-old farmhouse he shares with his parents and twin 16-year-old sisters, the six-foot-five Cooleen appears slighter without the helmet and pads—like an off-duty superhero. Football season is over. Falmouth lost the playoff in a close game, a disappointment that Cooleen is philosophical about. Even a defeat provides highlights, he reasons, recalling a game lost to Westbrook High School his junior year during which he made two one-handed touchdown catches.

Cooleen is a true triple threat, excelling in basketball, football, and lacrosse. He plays midfield in lacrosse, a game he appreciates for its improvisation. Last season, he scored 16 goals for the Yachtsmen.

For a wide receiver, precision of movement is required. “In offense, I know I have to cut across in seven yards, or five steps, or it won’t work.” Whichever it is, it must be working.

He plays center in basketball, where his height is a distinct advantage when it comes to netting points. He is the team captain for the second year in a row. The Yachtsmen were undefeated for the season, a first in the history of Falmouth High School basketball, with Cooleen averaging ten points per game. Coach David Halligan says, “He is a difficult match-up for other teams because if they guard him with a big, slow player he can use his quickness against them, and if they guard him with a smaller player, he can overpower them.”

An early bloomer, Cooleen was six foot three by eighth grade. “Like a big puppy,” his father Paul interjects. Jack laughs good-naturedly, confident that his puppy days are far behind him. Cooleen’s family is tight-knit, and he considers his maternal grandfather, who doesn’t miss a game, one of his heroes.

Math and chemistry are favorites. Cooleen plans to attend Tufts University in Massachusetts, where he will play football and is debating between a major in business or economics. His advice to young athletes? “Stick with it because I almost didn’t. I almost stopped playing football…but I decided to stay with it and it paid off in the end.”

With a high school career that has captured the attention of both local press and college recruiters, Cooleen is definitely doing something right.

“I like running and catching the ball,” he says simply. As his coaches and fans know, he makes it look as easy as that sounds.

Abbey Leonardi is a born racer. She even beat her twin sister to the finish line, arriving in the world just one minute ahead. So it is no surprise that Leonardi is a gifted runner. Along with her twin sister, Leonardi played soccer and skied. She began running track only after moving to Maine from Massachusetts. Cross country or tennis were the sports offered that year and Leonardi chose cross country. One imagines that today sheÕs happy she did.

Dubbed Most Valuable Player by the Maine Sunday Telegram three times for cross country and three times for track, she has competed as a sophomore, junior, and senior in the national Footlocker Cross Country Championships—the only Maine runner to qualify three times. A Gatorade Cross Country Runner of the Year and Gatorade Track and Field Athlete of the Year since 2008, her seven honors to date are the most received consecutively by any athlete nationally since the program’s inception. Leonardi capped her prodigious high school career by winning the five-kilometer regional with a time of 18:27.19 and beating her closest competitor by more than half a minute.

When I meet Leonardi for lunch in Portland, I sense she is a creature more comfortable on the move, a humming bird momentarily stilled. A diminutive five foot one with dark hair in a pixie cut, Leonardi appears shy about the heady swirl of attention that surrounds her. But as the first Maine female athlete ever to win the Class A cross country state championship title four years in a row, she’s not likely to escape notice anytime soon.

For a many-laurelled record breaker, she is gracious and soft-spoken. I have to lean in close to hear her. But her demeanor belies a nature that is focused, driven, and competitive—albeit, like her voice, quietly so. Her motto might be speak softly and run a 4:54 mile.

Illustrating her resilience, her father Jack recalls a race in which a competitor elbowed his daughter, causing her to fall into the sideline. “I had twigs in my hair and stuff,” Leonardi said ruefully. But true to her style, she got up, brushed off, steadily gained on her opponent, and won the race.

A few weeks after this interview, Leonardi ran the Foot Locker Cross Country Championships National Finals for the third consecutive year, placing fourth at 17:35—the best-ever finish by a Maine female, and a feat that also earned her All-American status.

Fast on her feet, Leonardi is equally quick to give thanks. She told the Maine Sunday Telegram, “I’m winning the state title, but there’s a lot more than just me going into it.” She credits the support of her family, friends, community, teachers, and school, especially coach Mike Dinehart. For Dinehart, the admiration is mutual. “I’ve run a few miles with Abbey,” he says. “And when she puts the hammer down, there’s no catching her. She’s inspired me to run faster now than I have in my 55 years.”

She considers three Maine runners—Olympic gold medalist Joan Benoit Samuelson, and marathon runners Kristin Barry and Sheri Piers—to be her mentors and inspirations. She is also eager to share the limelight with her twin, Aley, a serious athlete in her own right who will attend Stony Brook University this year on a soccer scholarship. Abbey cheers on her sister from the sidelines and humbly admits that when it comes down to who is the better all-round athlete, her sister takes the cake.

As for cakes, when she’s not training or competing, Leonardi enjoys baking and altering recipes to include healthier ingredients.

Leonardi will attend the University of Oregon, in Eugene, the nation’s epicenter of track and field, and the home of Nike. As a recipient of a track, cross country, and academic scholarship, a raucous college experience doesn’t appeal to this straight-A student thinking about a major in psychology. “I don’t consider it a sacrifice…there will be times for parties and being social. For now, I need to stay focused.”

Leonardi clearly knows how to pace herself, both on and off the track.

Rumor has it that cross country just may be an Olympic sport in 2018. Does she have aspirations? Leonardi nods and says in her quiet yet determined way, “We’ll see.”

For 18-year-old Cheverus High School senior and Yarmouth native Louis DiStasio (friends call him Louie or Lou), athletics started early, first with little-league baseball, then basketball, and then football. Like Jack Cooleen, he’s a triple threatÑan ace at all three.

Like his brother Mick before him, who now plays basketball for Trinity College, DiStasio won the George Vinall Award his junior year, which honors the outstanding player in the Western Maine Class A Boys Basketball Tournament. In baseball last season, he shared the title of Most Valuable Player with two team captains and was named to the All State Team. In basketball, his wingspan and range are practically unrivalled; he’s been known to score multiple three-pointers per game. He was co-captain of this year’s varsity team and a varsity team member since his freshman year.

A coincidence? Probably not.

His coaches agree: whatever sport DiStasio plays, he plays with skill and aptitude, not only excelling personally, but also improving his team’s odds of winning

Baseball coach Mac McKew says, “Lou has been on state championship teams in baseball, basketball, and football and has been instrumental in the success of all three.”

Whether running, kicking, pitching, or catching, he’s a natural. One gets the impression that, were he a musician, he could pick up and play every instrument in the orchestra pit.

Athletic director Gary Hoyt says, “Louie has a lot of character. So many kids his age want to be somebody else. Louie is happy being Louie.”

This ease is evident at football practice, where I watch him knife across a field to neatly catch a spiraling pass. Though a relative football newcomer—he only started playing two years ago—Southern Maine Activities Association nominated DiStasio state kicker in 2010, and in 2011 he made All State Wide Receiver, All-Academic team, and kicked 62 consecutive points after touchdown.

But baseball remains his forte. DiStasio’s favorite shortstop moment occurred during a game against Westbrook. “There was a ball hit to left center, and I ran and had what they would call a ‘Willie Mays catch,’ where I’m looking, I’m running, but I can’t see the ball yet and it kind of drops over into the glove, and I threw the guy out on first for the whole play.”

DiStasio’s catch effectively won the game, providing spectators in the stands with a vicarious thrill. What does it feel like to have all eyes on you?

“At the time, it doesn’t really feel like anything…like you’re alone, going for the ball. But after, when you hear the cheering, it’s like, I guess that was a nice play.”

Once, against Gorham, he hit for the cycle: a single, double, triple, and homerun in the same game.

Coach McKew recalls, “There were two outs and the bases loaded…and he used his athleticism to get to a ball that seemed to be a sure hit…he made it look easy.”

DiStasio admires Derek Jeter and Michael Jordan. “Both of them are just classy players.” He considers Jordan a gentleman. “A lot of guys make a basket and get all pumped up. Michael’s quiet, he gets the job done, efficiently.”

DiStasio will attend the University of Rhode Island on a baseball scholarship this fall, where his athletic prowess, adaptability, and easygoing self-confidence are sure to earn him many more “Willie Mays” moments.