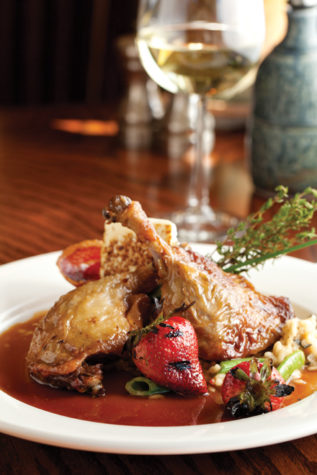 Duck confit with pancetta and snap pea risotto, resting in a pool of strawberry rhubarb demi-glace 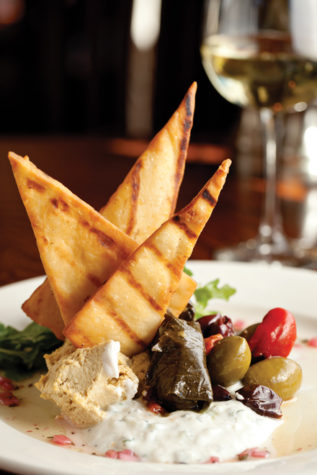 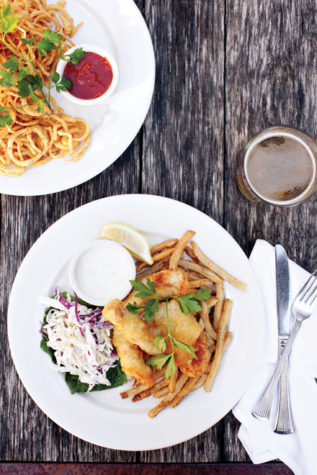 Pete Morency knows that preparing simple classics such as fish and chips with high-quality ingredients makes them memorable. 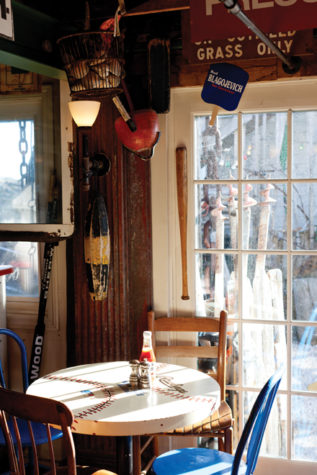 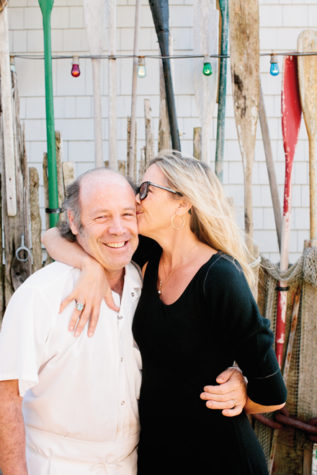 It says a lot about owners Pete and Kate Morency that they retain 90 percent of their staff, year after year. 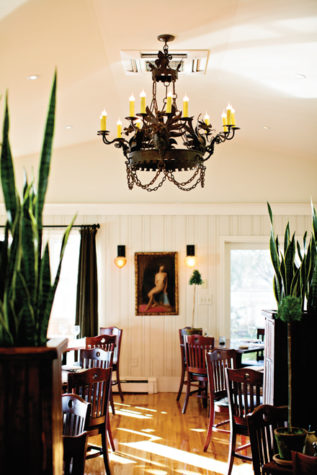 The dining room at Pier 77 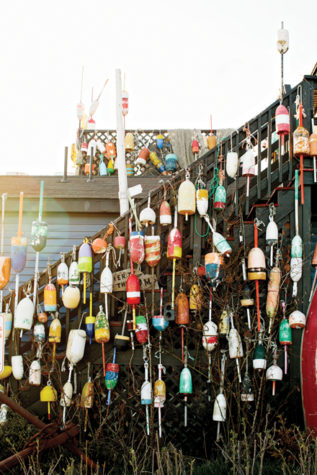 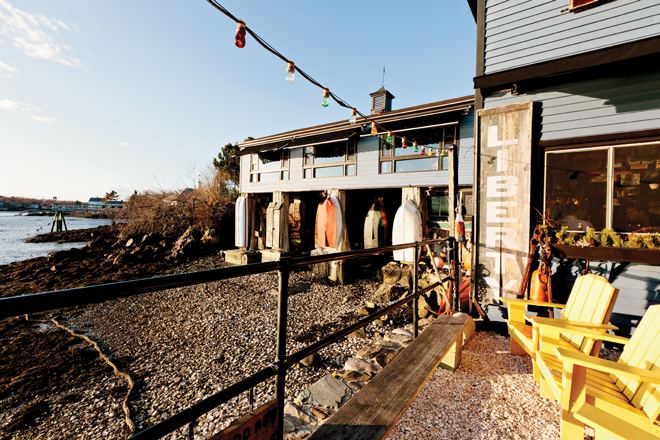 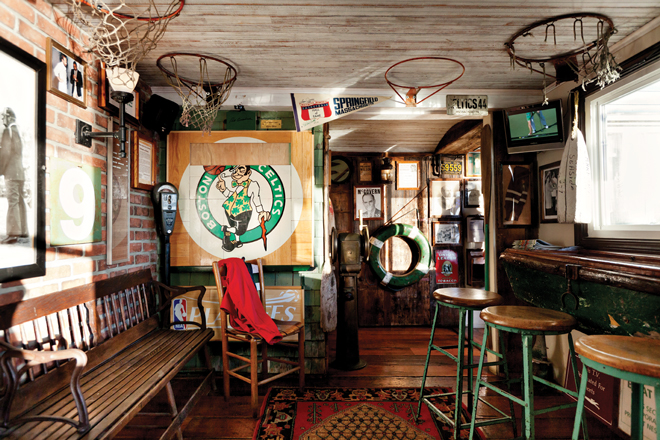 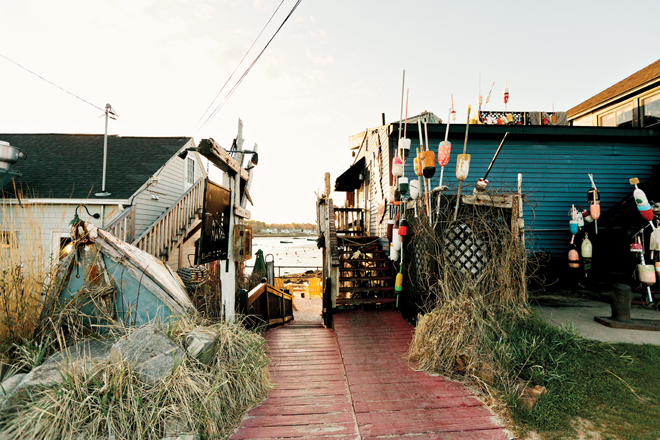 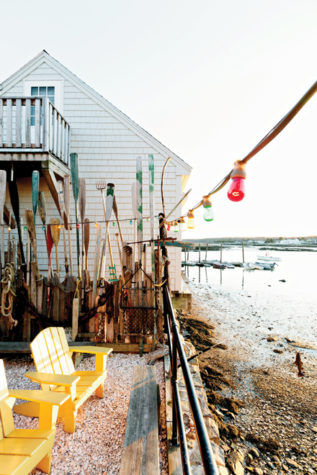 Take your drink outside and sit on chairs overlooking Cape Porpoise Harbor. 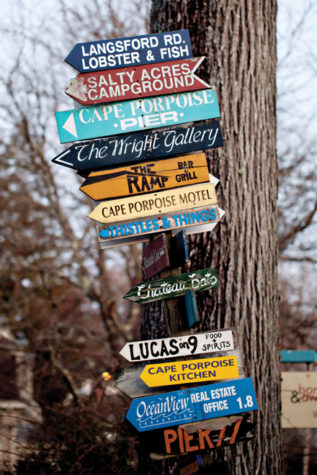 Pier 77 and The Ramp are entering their tenth year of operation. After spending an evening sampling the best of what each has to offer, it’s clear why they have become a dining destination.

Although the Ramp in Cape Porpoise is far from alone in featuring sports memorabilia in its decor, you begin to realize, if you spend enough time there, that its collection is different and each item comes with a unique personal story.

In my opinion, the tales are best when told by chef-owner and New Bedford native, Pete Morency, and best heard while sipping a large glass of Talisker scotch. He will go on about the 40 years he spent cooking in professional kitchens, the time he turned down a job with Alice Waters, and the piece of Red Auerbach’s office floor, signed by Celtics legend Bill Russell, that he owns. Pete’s great sense of humor, especially in the political arena, is reflected in the varied and often controversial campaign posters that he displays proudly in a town widely known for its conservative leanings.

Pete’s charismatic brand of rogue thinking is reflected in the Ramp’s atmosphere, and it keeps both locals and tourists alike packing into the tiny bar. Meanwhile, the dining room of Pier 77 just upstairs is warm and inviting, anchored by stunning views of Cape Porpoise Harbor from every table. When I meet with Pete’s wife, Kate, co-owner of both restaurants, she explains how the two very different establishments began.

“I’m from San Francisco and Pete had been cooking out there for over 20 years,” Kate says. “But this didn’t stop his sister, Jaye, from emailing us listings of restaurants for sale in an effort to get him to come back home. I kept insisting that I wasn’t going to move to Maine.”

The couple finally succumbed to Jaye’s enticements in January 2003, when they agreed to fly back to look at a potential location. She recalls the bitingly cold, ten-below weather with six feet of snow piled up on the ground. Despite the arctic conditions, one look out of the dining room windows was enough to seal the deal in their minds. Three weeks later, they closed on the space, and three weeks after that Pier 77 and its downstairs bar, the Ramp, opened for business. “We had very little time, and money, so most of the decor came out of our house,” Kate says. “My father was a great artist, so most of the paintings are his and still are today. The floors went in the first year, and each year after we would make an addition—tabletops one year, the bar the next year, etc. Now, almost ten years later, we are finally done, I think.”

The food at Pier 77 could be best described as contemporary American, featuring dishes that combine the Japanese, Chinese, Portuguese, and Mexican influences that Pete picked up over the years. While other chefs talk about using fresh local ingredients as a selling point, Pete simply views it as “the first thing you learn about cooking great food.” Everything he creates is “from the bottom up, using the best stuff I can get my hands on, and hopefully most of it can be local.” His background speaks for itself, including extensive experience as chef in such West Coast hotels as Hotel Nikko, the Mark Hopkins, and the Park Hyatt. What he always wanted, however, was a casual sports bar that would double as a shrine for his collection and serve inexpensive but delicious pub fare—that’s where the Ramp comes in.

On a recent visit, a friend and I begin with dinner at Pier 77, planning on enjoying several libations at the Ramp afterwards. Though it is March, the temperatures have been peaking in the high 70s during the day and the evening is starting to cool down. We are seated in front of an enormous window, just in time to witness a breathtaking sunset over Cape Porpoise. The room is sleek and modern, but by no means formal, which accentuates the casual character of the establishment.

While the Ramp is open year-round, Pier 77 is just getting started for the season—which, for our server, will be her seventh. Further investigation reveals that most of the staff has had long tenure at the restaurants. I look to Kate for an explanation, and her reply succinctly captures the reason for such loyalty. “I don’t believe in management in restaurants, as they usually don’t have much to do so they bother everyone else. It’s been sort of an experiment from the beginning. We hire people who have experience, are confident in what they do, and take ownership over their positions. So far, it has worked out beautifully—90 percent of our staff comes back every year and we all like each other.”

My dining companion and I start with a bottle of Clos Cristal Hospices de Saumur Saumur-Champigny, an elegant cabernet franc from the Loire Valley. Forest aromas give way to black-cherry flavors and strong herbal notes with an excellent acidity that complement a range of foods. The pairing is spot-on with our first dish, a smoky, velvety clam chowder that features a pleasing textural interplay resulting from the addition of chopped quahogs and bacon. Even though the restaurants serve a huge amount of chowder, especially during the summertime onslaught, Pete describes his chowder as a true labor of love that involves no shortcuts.

The Oysters Bingo, a popular Northern California variant of Oysters Rockefeller, features oysters broiled with spinach, garlic, cream, and Parmesan cheese. The dish is wonderfully rich and salty, with a slight spinach crunch complementing each bite of juicy oyster. For me, the most compelling offering on this particular visit is the seafood stew that has been supplemented with grilled bread slathered in creamy lemon and spinach aioli. The subtle characteristics of saffron and tomato in the broth don’t overwhelm the flavors of fresh haddock, clams, mussels, and shrimp.

For dessert, my dinner companion and I share a blueberry crumble topped with vanilla gelato that toes the line between a cake and a pie. After finishing our wine, we make our way down to the Ramp and polish the evening off with Guinness and scotch. Quite frankly, one could spend hours exploring the impressive collection of sports relics that make up Pete’s collection and still miss some of its most remarkable details. Even though I’m surrounded by a colorful array of happy locals talking about sports I know painfully little about, I’m truly in my comfort zone.

In addition to Pier 77 and the Ramp, the Morencys opened a casual Mexican restaurant, Pedro’s, in nearby Kennebunk. “Pedro’s was straight-up fun for us,” says Kate. “The space became available and we had no business wanting another restaurant, but we couldn’t pass up the location. Once again, the decor came mostly out of our home and we had a great time putting it together any way we wanted to.”

“Pedro” is actually Pete’s nickname—it was given to him by the crews of Mexicans, Guatemalans, and Nicaraguans who formed the backbone of his kitchen in San Francisco for more than 20 years. From them, he learned the South American language, customs, music, and methods of food preparation, and the experience inspired him to open Pedro’s.

“It’s a great place for me to grab a drink on my way home from work each night,” Pete says.