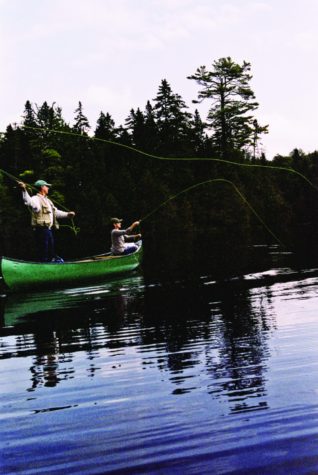 Igor and Karen cast across the calm water. 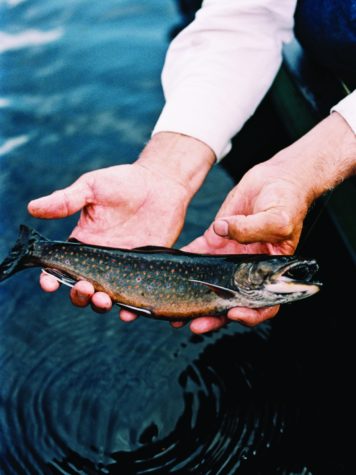 A few minutes' ride from camp in a floatplane is a littleknown fishing spot. 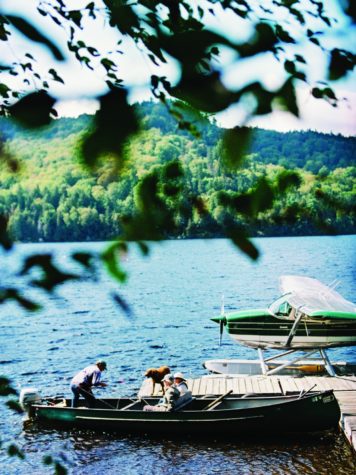 Bradford Camps traces its history to the 1890s and William Atkins of Quebec, who first brought men from New York and Boston to the "Sportsmen's Paradise." 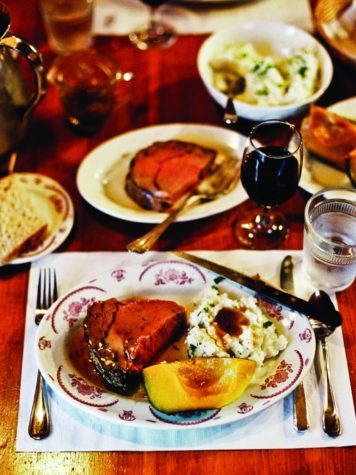 Guests listen for the bell to know that breakfast, lunch, or dinner is being served in the lodge. 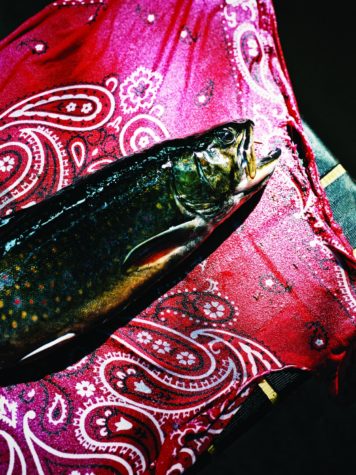 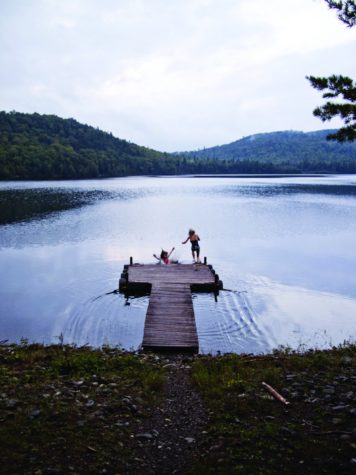 A final leap into Munsungan 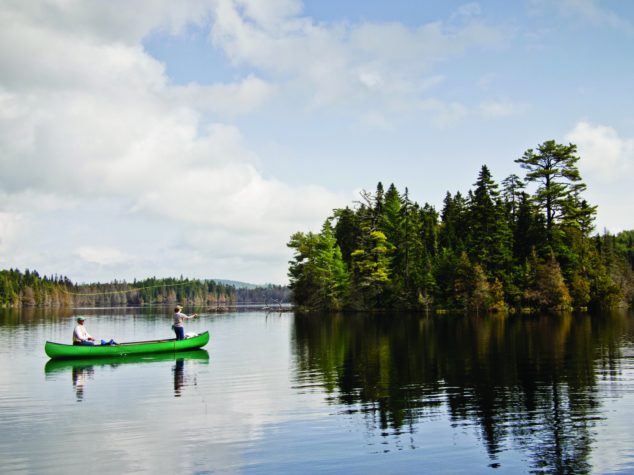 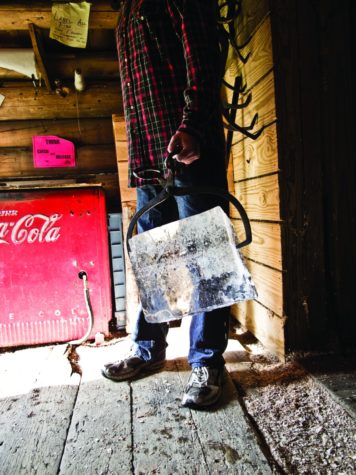 Ice cut from the lake in winter keeps drinks cold all summer long. 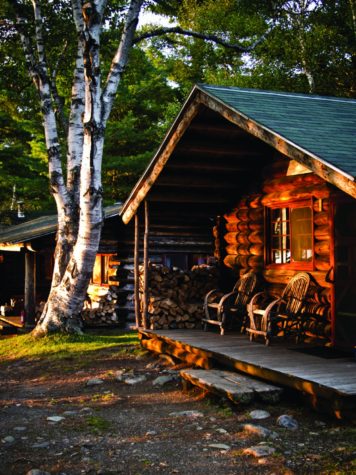 Log cabins on the lakefront at Bradford Camps, all with warm quilts and gas lights, but no electricity.

When you have to get to a place by floatplane, you’re either heading somewhere or into the middle of nowhere. Either way, it’s time to take off.

Naturally, we fall into the rhythm of the camp.

I go to the small wooden ice house behind the lodge and use one of the ice picks—Igor shows us how—to stab a gin-clear block until I’ve got enough shards and chunks to fill a small bucket that I tote back to our cabin. Igor says he comes up to the camp by snowmobile every January with a group of friends to cut ice from the lake, and together they bury it under sawdust in the icehouse. They have never run out over the course of a summer, he says. I love the ice—both the idea of it and the taste.

The first night after dinner, a group sits on the porch of the lodge after the generator has been turned off for the day. The only light is from the moon. We’re all talking and, at some point, Moxie laps up the melted ice and splash of whiskey in someone’s glass. Everyone’s laughing and then Karen and Igor recount the time Moxie picked up a lit cigar and appeared to smoke it. My glasses of ice and water (and a cocktail or two), never tasted so sweet. A few of us wonder aloud if there’s a way to market these crystal-clear cubes of lake.

We take turns looking at the silvery-white full moon through a telescope, and Igor starts a bonfire at the very edge of Munsungan Lake in a firepit protected from the winds and water by a huge stone and the upright blade of a steel backhoe. The fire reflects off the water and sparks crackle and rise into the coal-black sky. I look back at the circle of men around the flame from a distance as we walk back to the cabin, and the scene looks historic, or even prehistoric. Later I read in the propane lamplight until we fall asleep under quilts. Well past midnight, I suddenly sit upright in bed, wide-awake and listening. At first, I can’t process what I’m hearing, and I think the ruckus is the men’s group whooping it up at their card games in the nearby cabins. But soon I realize that it’s coyotes yelping. A hunt? Someone had said that coyotes are likely on the opposite shore of Munsungan Lake, but they sound much closer. I’m excited to be in a place so wild. But in the morning, some of the other guests say they heard nothing. “Good sleeping weather,” one man says, stretching his arms over his head. “I slept ten hours last night.”

The second afternoon, two loons are on the calm lake in the hour before dinner. Sunlight is falling fast, and I see Karen on the dock near where Igor’s plane is tethered and floating, as if it was a boat on a mooring. I pull on my bathing suit, grab a towel, and hurry down to the water. Karen says, “Let’s jump from the plane.” She shows me how to step around the propeller and get a foothold on one of the floats. She’s standing on one and I’m on the other, and—like kids in a schoolyard—we decide to jump together on the count of three. Thunder is rumbling in the distance and I look at the ancient mountains across the water before we both jump as high and far as we can. The lake feels so cold it must be on its way to becoming ice again, and I gasp when I come up for air. After some splashing around, I dash back up to the cabin. I’ve got just enough time to change into a turtleneck and jeans before the dinner bell.

It’s our third day at the Bradford Camps, and we hatch a plan to catch a native brook trout. Igor and Karen know just the place—a nearby pond with an undeveloped shore. Even better, they suggest that we all go in Igor’s floatplane the next day to get there. In the morning, we pack up our fishing poles, gear, and a cooler of sandwiches and drinks from the lodge kitchen. In a few minutes, we land on the pond (the name and location of this fishing honey hole is a secret). Igor cuts the engine and uses a paddle to guide the plane over to a spot on the bank where he keeps canoes. The pond is restricted to fly fishing only, and we each take turns casting. All is quiet for an hour. Karen is the first one to get a hit, and she reels in a brookie, its gold and red spots gleaming on an olive-brown body. We land one more, but wrap only one fish in a red bandana to bring back to the camp. The trout is a beautiful treasure, and we carry it carefully.

Today is departure day. We pack and meet Matthew in the kitchen, where he’s already frying the whole trout for us in a skillet. I don’t think guests typically go into the kitchen, but we’re comfortable amid the shelves of plates and cups, the loaves of rising bread, and the big pot of squash soup that’s already simmering on the stove for lunch. When the fish is plated and ready, we all find forks—Karen and Igor, as well—and taste the wild-caught trout without bothering to relocate to the dining room. The still slightly pink flesh is incredibly delicate and delicious. We’ve waited so long to get here that we’re still taking in as much of the Bradford Camps as we can. We talk of the prior day’s fishing and of other happenings in the several days since we arrived. Karen turns up the volume of the radio for the Writer’s Almanac on National Public Radio—apparently a daily ritual at the camp. Everyone in the kitchen goes quiet and still for these moments as Garrison Keillor reads a poem by Hayden Carruth. It’s a thoughtful verse, something to mull over and discuss, but through the screen door we already hear the distant buzz of Jim Strang’s plane.

Too soon, he’s coming to return us to the everyday world, where time for things such as poetry, fishing, and jumping from float planes is simply too damn rare.