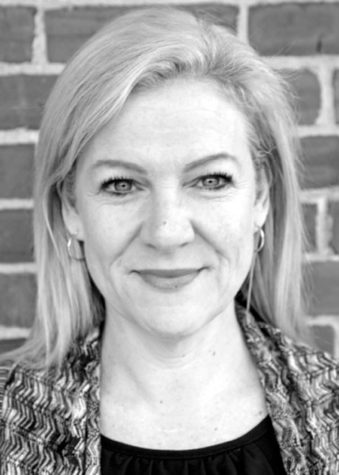 Where did you grow up?
I grew up in Boston in a neighborhood called Hyde Park. When I was 16, I moved to the South Shore and I ended up graduating from University of Massachusetts Boston. I got married and my now ex-husband and I sort of inched our way north.

What was your path to becoming a social worker?
I always wanted to be a social worker. I thought I wanted to work with teenagers, and I did for the first couple of years but felt so ineffective. I thought maybe I should reevaluate my career and took a job in Macy’s. I worked with a young girl whose father was looking for a social worker in a nursing home. I walked into the nursing home—which is a place so many people find depressing, though I never have—and had my first conversation with one of the residents. I realized I wasn’t a lousy social worker, I was just wasn’t working with the right population.

You are currently a geriatric care manager. What does that job entail?
When there is a situation in a family with an elderly person who is struggling at home, I go in and do an assessment—physical, functional, social, financial—and work with the senior and their family to work out a plan to keep them in their homes safer and longer. I always tell people I’m not adverse to facilities and never have been. I’ve worked in them and know they can be good—I know they can be lousy, too—but it’s never the first place anybody starts. I love putting the pieces together and helping people move ahead.

You also work with young people through the program Senior to Senior?
Every day 10,000 people turn 65. That’s going to continue for at least another 12 or 13 years. I’m trying to help young people get it. Aging is not scary, gross, or depressing. One of the reasons I became a social worker is because I love stories. I go to the high school and I say to the kids, “So you play Mortal Combat? I know a guy who was a fighter pilot in World War II who jumped out of an airplane under fire, parachuted into the ocean and hung on to a buoy for two days until he was rescued.” In the program Senior to Senior, which I help fund and champion, we match seniors in high school with seniors out in the community and foster those relationships. I’ve had students going off to college change their majors after working with an elderly person. Eighty and 90 year olds and 18 year olds are alike in a lot of ways. High school students are wondering what’s next and often feel disenfranchised. Elderly people are feeling that way, too. They’re all wondering where they belong, who they belong to, who cares. They connect on a level you might not expect.

Is there story about a senior-to-senior relationship that stands out to you?
There is a wonderful woman [named Selma] who was on Broadway as an actress, lived in New York City and eventually retired in Maine. We paired her with a Cape Elizabeth High School student who told the story of Selma’s life in a beautiful book with amazing graphics. The very last page of that book had a quote by Selma, and it blew my mind that that teenager thought as much of that quote as I did. The student had asked Selma about how she felt about living in an assisted living facility, and her answer was something like, “For the first time in my life, I’m not somebody’s wife, I’m not somebody’s mother, and I’m not an employee. I get to be myself and I’m doing the things I should have done when I was 20.” When I read that I got chills and didn’t know whether to laugh or cry. Selma’s not sad or mad about this phase in her life. She’s making the most of it.

What do you hope to accomplish through this work?
We are a youth and looks obsessed society. Even though we are one of the wealthiest and best-educated nations in the world, from a cultural standpoint we are way behind in how we treat and care for our elders. This is a generalization of course—there are many people out there doing great work—but as a culture, elders have become almost invisible. This is my war cry. This is the root of my revolution. We’ve been doing to when our goal should be to collaborate with. Be respectful, consider elders’ dignity and partner with them.

What’s unique about working with elders in Maine?
Maine is the oldest state in the nation. I grew up two hours south, and it might as well be Mars. In Maine, children of elderly often say something along the lines of, “My mother won’t let you through the front door.” Many people are afraid I’m going to figure out all they’re doing wrong and take them out of their home. But in Maine, I see such independence and self-reliance. My job is to foster that. I tell them, “This is great. I just want to make it a little better.” Give me a tough old Yankee any day. I love it. I love my job. I’m one of those people who wakes up in disbelief that I get to do this work and making a living off of it. I almost can’t comprehend it.