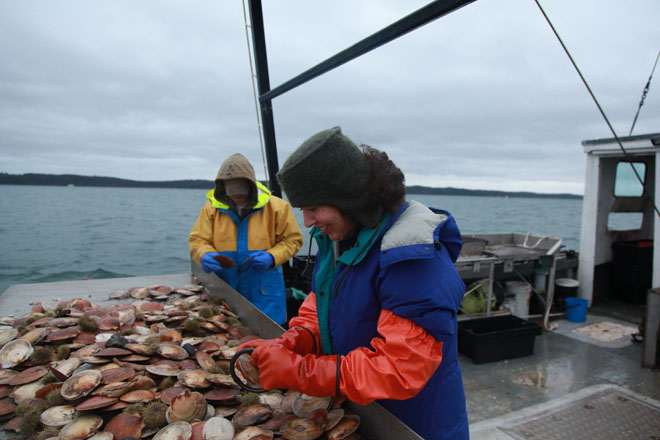 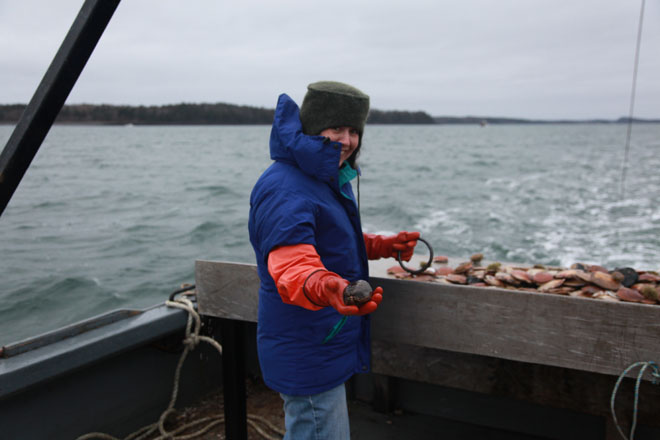 Togue Brawn has been working with seafood in a variety of capacities for over 20 years. From selling lobster rolls and clam cakes out of a cart on Commercial Street to waitressing at J’s Oyster to working as a Resource Management Coordinator at the Maine Department of Marine Resources, she knows the industry inside and out. One of her most recent ventures is Maine Dayboat Scallops, where she sells scallops fished by Mainers and brought to shore within hours of being harvested.

How did you become interested in commercial fishing?
I grew up in Cape Elizabeth. My father lobstered in the summer. My parents are both retired from teaching, but my father still lobsters. I went to school away from Maine because I knew I wanted to live here eventually and I wanted to experience another part of the country. I went to Duke in North Carolina. I also worked as an au pair in Switzerland. When I came back to Maine I was 24. I saw this job listing for tradeshow administrator with Diversified Business Communications. I went into the building and there were all of these—it was fish expo—and there were all of these posters all over the walls. I can’t really explain why, but I’ve always had this fascination with fishing. I felt right at home. Eventually another trade show company tried to recruit me, and they wanted me to move to Ohio. I was like, “Are you kidding me? Why the hell would I move to Ohio?” And they said, “Well, if you work for two years in Ohio we’ll send you to England.” So I went out there and after six months I was just miserable. I remember just sitting there, in a cubicle under florescent lights, just imagining being in my parents’ kitchen in Cape Elizabeth making strawberry jam. I remember when I came back to Maine and saw that sign, “The Way Life Should Be,” I cried. I worked for my father, then started my own lobster roll and clam cake cart on Commercial Street. I did well—because I made really good clam cakes and lobster rolls—but I knew that wasn’t what I wanted to do. I ended up going to graduate school for fisheries management, which put me on my current career path.

How did you become involved in the scallop fishery in particular?
I ended up taking a job at the Department of Marine Resources, and I absolutely adored it. There were two resource management coordinators who helped advise on fisheries and act as a liaison between fishermen. There was one that handled lobster and one that handled everything else. I took the “everything else” position and chose to focus on scallops. For a few years, scallops were second only to lobster in terms of the amount of money they brought into the state. In the 1980s and 1990s, a lot of fishermen got into the business and they overfished it. It’s really hard to bring fisheries back in general, but with scallops it’s actually fairly simple: leave them alone. They’ll multiply and they’ll grow. But you have to get to the point where fishermen are willing to do that.

How did you go about collaborating with fishermen to bring the fishery back?
There was a scallop advisory counsel. A group of fishermen were supposed to advise the counsel on how to manage the fishery and I worked with them. We got energized and made some really dramatic changes to the way scallops are managed in Maine. We implemented a 200-pound catch limit and limited the number of licenses. Over the next three years, [from 2007 to 2010], we cut the season in half. The biggest change is that we closed 20 percent of the coast.

How did that go over?
In a meeting in Jonesport, I remember one of the fishermen was talking about possibly lowering the limit. He said, “You know, I wouldn’t mind lowering the limit if I could be certain I could get a good price.” It just hit me—here’s this guy bringing in 80 pounds of fish a day that he catches in this really small boat. He leaves and comes back in the same day, so his scallops are four hours old when they’ve landed. And he’s getting the same price for those hours-old scallops as a guy who fishes on George’s Bank and comes back with 10,000 pounds of two-week-old scallops. It just doesn’t make any sense. I tried to get some dealers to specialize in Maine scallops, but it’s a very brief fishery—just 70 days. So these dealers aren’t going to change their business practices to focus on this tiny little Maine state fishery. And because they aren’t getting premium prices for these superior products, they’re soaking them and mixing them in with week-old scallops.

What does soaking them mean?
That’s what a lot of scallop dealers do, because scallops absorb fresh water. If you’re buying them for ten bucks a pound, you can sell them for the same price and still make money, because if you soak them in water they’ll gain 40 percent in weight.

So what was the next step toward capturing value for Maine scallops?
I cut out the middleman by becoming the middleman. [After leaving the Department of Marine Resources] I started my company Maine Dayboat Scallops with a goal to link the fishermen up directly with the chefs. Whenever you buy my scallops, you get the fishermen’s name, the vessel’s name, and you see the date when the scallops were caught.

And you pay a higher price for them?
Yes. The fishermen love selling to me because I pay them more. Which is sort of stupid because I’m not going about this with a sensible business practice. Most people want to pay as little as possible and charge as much as possible and what I end up doing is paying more than I have to just on principle. I should be charging a lot more for them. I mean, I’m definitely not charging what I should for these in terms of how much better they are. But I want the fishermen to make more money. That way they’re fishing less, cutting back their per-pound limit, and getting more money. So they’re better off, their product is better, and people will pay. Having worked in food service, I know that people will pay extra to know they’re eating that guy’s scallops.

What work are you most proud of?
I’m very proud of the work we did at the Department of Marine Resources to turn the fishery around. And I’m happy the DMR has kept up the priority with scallops. I see this huge opportunity for Maine fishermen to be making more money. We know that if we manage this product carefully, it can bring in a lot of money. And it’s amazing. This product is so much better than any other scallops out there, and I just need to get that message out to people.