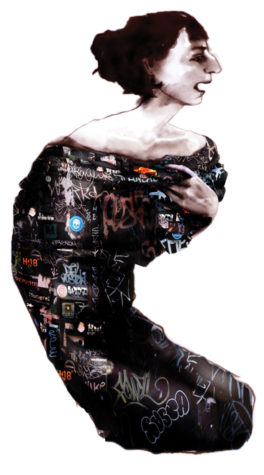 from the kitchen window, breathing his face (unnamed, utter), a mountain no one understands, unsung by yak and yodeler.
I’ll paste graffiti on turnstiles, overpasses, across the Verrazano straits, tags the rasp, scrape, reverb, the loop bounce stutter

from the kitchen window, breathing his face (unnamed, utter), a mountain no one understands, unsung by yak and yodeler.

2
Overturning a Balinese gong to use as cutting board
in the house of frail, an inexplicable clock. Or the dark adding up hour-by-hour, note by broken letter. Thickening into shawls.

3
Yes, Lycra can improve your performance
stretched across the proverbial wheelbarrow, ruined emblem, but what withers when the lilacs

lean in the violet light, and you are running toward what

stillness, like the memory of crows gone from the bare olive branches. Years later, you witness

4
Burnt-out taxis rust like lozenges on a tongue of rain City of standing long ago, city of archeological silence?

like the shadows Akhmatova sought,
the discordance between thinking and thought

is absence? Or singing? The dark-haired woman keening, kneeling at the pasture for failed seeing-eye dogs.

Ravi Shankar co-directs the Creative Writing Program at CCSU and teaches at the Stonecoast Writers’ Conference. Sean Thomas Dougherty is the author or editor of eleven books and was awarded a Fulbright Lectureship to the Balkans.

About the collaborative poem, Ravi writes: “In the improvisational way a jazz musician throws out and assimilates riffs, in undertaking
this collaborative process with Sean Thomas Dougherty, I laid down a number of potential opening lines that were responded to, bent and appended to by Sean who then sent them back to me for amending and pushing forward; in this way we arrived at a certain plasticity of language where it was unclear what was his, what mine, and in that dissolution of ownership, our poem, a new and unforeseen consequence, emerged into existence.”