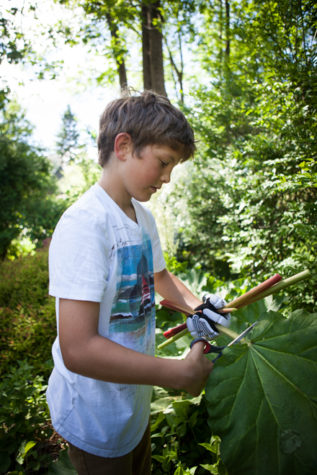 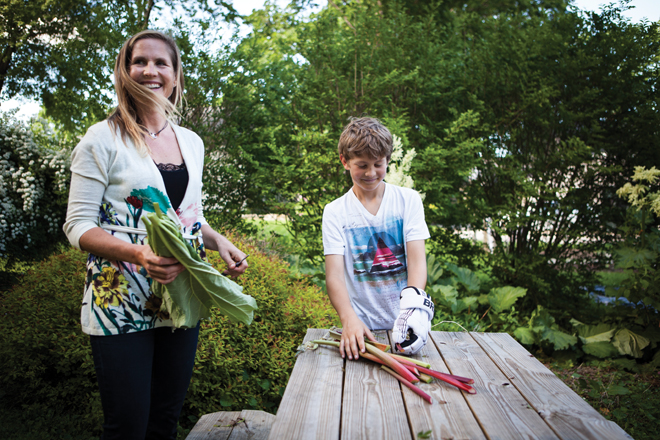 Cindy Morris and son Thomas admire the abundance of rhubarb at home in Yarmouth. 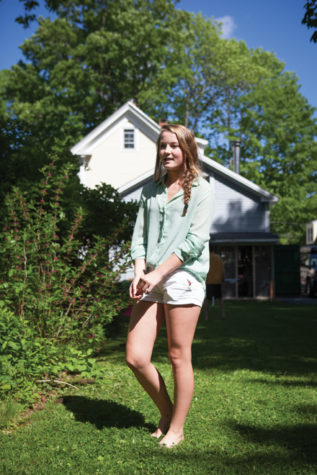 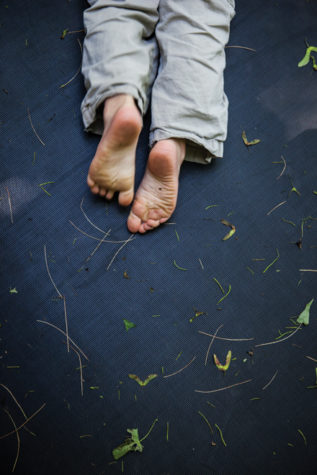 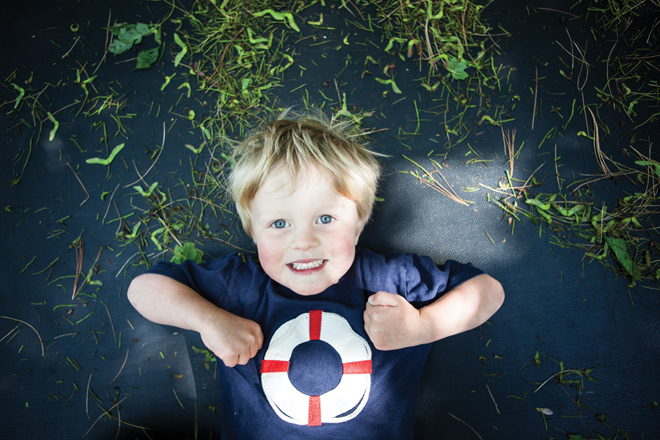 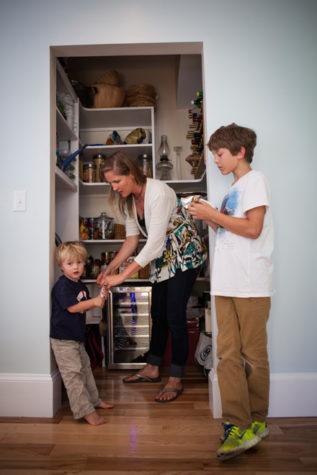 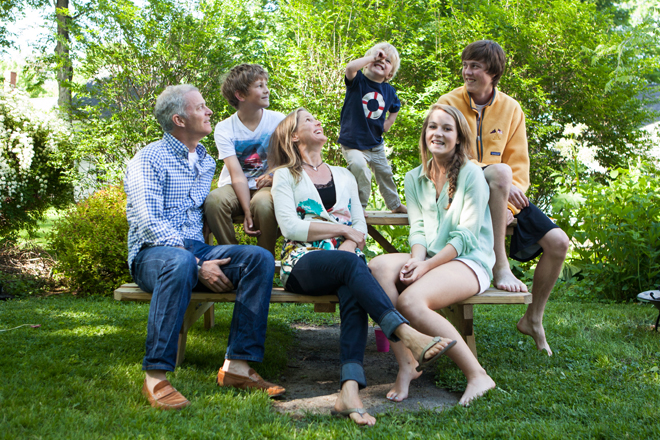 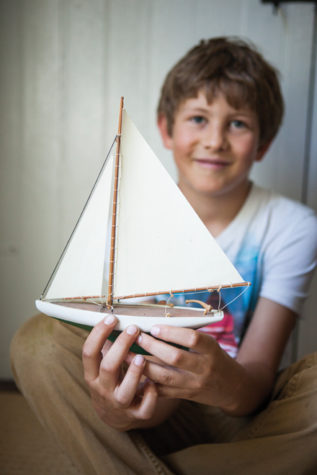 Thomas with a boat given to him by his grampy, Tom Morris. 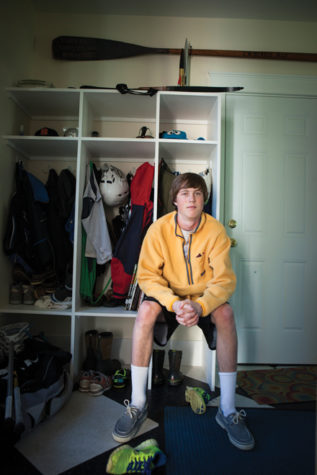 Sam before lots of athletic gear in the mudroom. 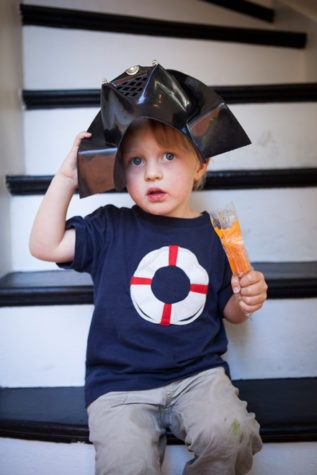 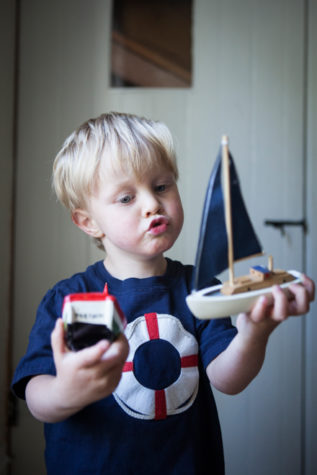 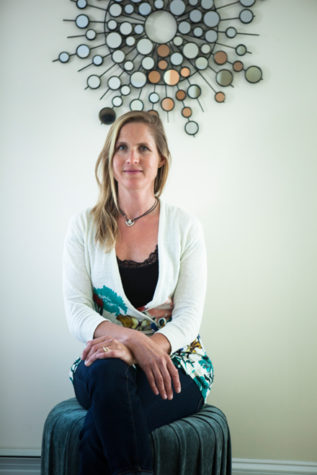 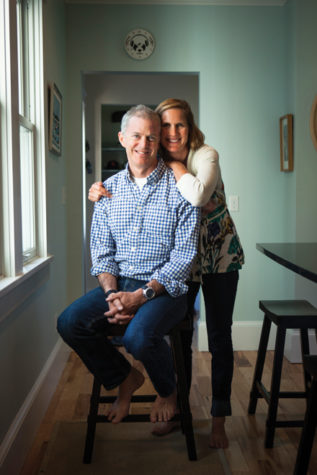 Cuyler and Cindy Morris in the kitchen of their Yarmouth home. 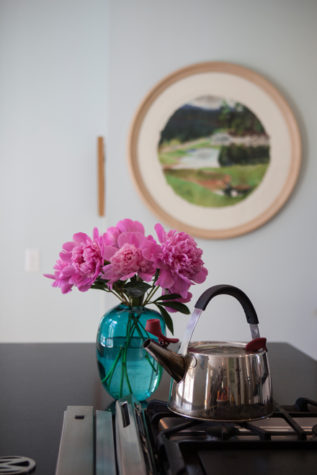 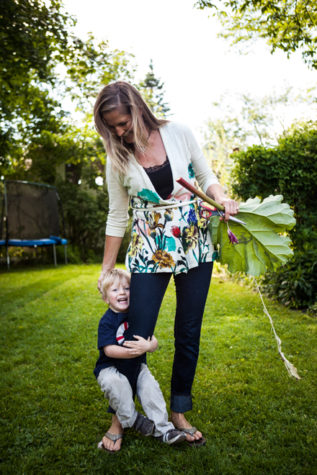 The Family That Sails Together

There was a cold chop in the water off Northeast Harbor on November 4, 2006, when  Cuyler Morris stepped aboard Firefly and cast off into the current of a new life for the Morris family. His ten-year-old son Sam would join him in Bermuda, and in Antigua, Cindy Morris and their other two children, Sophia, eight, and Thomas, four, clambered aboard the 45-foot sailboat that would be home to the five of them for more than eight months. You don’t have to be raised in a boatyard, owner of a major yacht-building enterprise, and an accomplished ocean-racing sailor to embark on such an adventure; but it helps. For starters, Firefly is from the Morris Yachts Ocean Series. She had been turned in to the company when her owner traded up for a larger boat. She was there, she was ready to go, tried and tested. Cuyler and Cindy had been talking about doing this for years. Now was a good time. The children were old enough to be part of the experience yet still young enough to buy into a family activity.

Antigua, in the Lesser Antilles, became the home base from which the family traveled for the remainder of the trip. “There’s only so much you can bring on board a boat,” Cindy Morris says. “Sophia had a basket with everything that was hers. But one thing you always bring aboard,” she continues, “is yourself. People may think romantically about ‘going to sea,’ how it will change their lives and everything will be different. Everything will be different, but you are still you. They are still themselves—and in extremely close quarters. Cruising with your family makes for good glue. We did that together. We did it!”

The family celebrated Thanksgiving in Antigua with friends (“yachties”) from all over the world who like themselves had disconnected from the mainstream. They called at Deshais and Les Saintes on Guadeloupe. The Christmas and New Year holidays found them in the Grenadines, Mustique, and Petit St. Vincent. “Today we went on a passage and it was a non-barf trip,” Sophia wrote in the log. Grenada, the Spice Island, prompted Sam to draw its flag and write a vivid description of his experiences there: “We went to the rum factory and the chocolate factory. The rum factory smelled like molasses. It was weird!”

Revisiting this experience nearly seven years later, the Morris children are animated. Asked what he remembers most, ten-year-old Thomas—named for his grandfather, founder of Morris Yachts in Southwest Harbor—sings out: “Swimming!” His younger brother Charlie, three (who was not around for the Caribbean cruise), is dressed for the occasion in Darth Vader headgear and thinks this is hilarious. Oldest brother Sam, now 16, says, “It was crowded.” Sophia, a lovely 14, just smiles, but when pressed, agrees with Thomas: “Swimming”—and “the Cousteau Underwater Reserve in Guadeloupe.” “Yes!” everyone else chimes in. Years, dreams return. “Pizza in Antigua!” “The kingfish who bit through our tackle just as we were about to gaff him!”

“There is no other sport, no activity, that brings a family into close proximity with the need for both compromise and self-sufficiency like sailing,” Cuyler Morris remarks later. “There are no easy answers,” Cindy adds. “You’re on your own.”

Transatlantic sailor and author Peter Nichols agrees. Reached at his home in Rockport, he talks about taking his son Gus, eight, sailing last fall in the British Virgin Islands, an experience he wrote about in the February 2013 issue of Cruising World. “It’s a perfect antidote to the rest of the world,” Nichols remarks. “It’s real rather than virtual. Everything occurs at a seemly pace. It takes hours, even days, to go a few miles. Kids get a great appreciation of distance, which is not available to them in today’s life. And weather? This is elemental stuff. It’s not breaking news on the Weather Channel; it’s what determines everything that happens every single day.”

At the end of February, the Morris family returned to Antigua, where they spent some time exploring the island, varnishing the boat, and making repairs in preparation for their upcoming trip to the British Virgin Islands, all while living aboard Firefly. March and April found them at sea again: St. Barths, Tortola, and two weeks on Virgin Gorda in the BVI exploring, seeking out forts, hiking, swimming deserted beaches, in short, enjoying the relaxed pace of the cruising lifestyle.

“The kids read like crazy,” Cindy Morris says today.“Tintin books, everything.” “We had more than a hundred pounds of books aboard,” Cuyler offers.

Cuyler Morris knows the world of sailing well. His father, Tom Morris, was born in Philadelphia, but his family had summered on Mount Desert Island since 1886. In 1972 at the age of 32, he succumbed to his passion for sailing, and launched Morris Yachts in Southwest Harbor. “My dad was a guy who loved to sail and loved to work with his hands,” Cuyler says. “Building boats was the only thing that made sense to him.” Their early homes were at the boatyard and Cuyler says of his childhood “I grew up in the boatyard. I’d come home from school and be right there.”

Unlike in some family businesses, Cuyler’s involvement was not a foregone conclusion. “My folks encouraged us, my two younger sisters and myself, to explore possibilities, to do our own thing,” Cuyler says. While he loved boats and sailing, when he went off to college it was to study environmental science and biology at the University of Colorado, quite a ways from salt water. It was there he met Cindy, who had grown up in Minnesota, land of a thousand lakes, but who was not a sailor. “Cuyler persuaded me to work with him on a race boat one summer,” Cindy recalls. “We delivered the boat from Halifax to Maine. This was before smart phones and visual GPS,” she continues. “Cuyler was below charting our course using the Loran radar system. He was very specific that if I did not steer the proper course, we could end up on the rocks.” She’s very relaxed recounting this tale. “The seas were rough—ten-to-fifteen-foot waves and it was blowing 35 knots plus. I was cold, I was seasick, and I was terrified,” she says now, “but when we made it back to land, I knew I was hooked on sailing.”

“Sailing is what I do,” Cuyler says, “it’s what I’ve always done.” After college, he and Cindy married and began the itinerant life of serious sailboat racing. He participated in an America’s Cup race and made two efforts at Olympic Star Sailing, as well as racing multiple offshore and inshore one-design championships. “By the end of PACT 95 when the America’s Cup was over, we were in San Diego and I was beginning to see this was not the life Cindy and I wanted,” Cuyler says. “The guys who kept doing this, who followed the boats, were single, had no children. They lived out of a sail bag.” At just that moment in the autumn of 1995 when Cuyler was rethinking his options, Tom Morris called from Southwest Harbor. The service manager at the yard had quit and he offered the job to Cuyler. “He gave me 48 hours,” Cuyler laughs. “Nothing for years and then, basically, take it or leave it.” He took it.

The company Cuyler joined alongside his father was not the same one he had grown up with. Tom Morris made a crucial early decision when he began boatbuilding with the Pemaquid Friendship Sloop in 1972. The Morris Heritage Yacht series formed the solid foundation of the business. In 1979, Morris introduced its Ocean Series, a line of high-end performance cruisers designed for circumnavigation but built with a combination of powerful performance and a lightweight, beautifully appointed interior. It was a Morris OS 45 which took Cuyler, Cindy, and the family on their Caribbean cruise. These are the yachts that prompted Sail magazine to identify Morris Yachts as “America’s premier sailboat builder.”

Morris also entered into a relationship in 2004 with the renowned naval architecture firm Sparkman and Stephens to build Modern Classics. Sparkman and Stephens’s designs have won most of the world’s major international yacht races, including the America’s Cup, Fastnet, and Sydney to Hobart. When the new M52 sailed into San Francisco this May to participate in the upcoming America’s Cup, Sail magazine crowed “Luxury aficionados can certainly appreciate this ‘jewel on the bay.’ These yachts carry a standard of meticulous attention to detail, timeless design, technological innovation and uncompromised luxury: this true American beauty pays homage to the bygone ‘Golden Years’ of sailing.”

In 2001, just six years after joining the company, Cuyler Morris took over as CEO, working alongside his father. Sadly, Tom Morris passed on in 2008. “I not only lost my dad,” Cuyler says. “I lost my business partner.” Today, Morris Yachts continues to be strong with yards and offices in Bass Harbor, Northeast Harbor, Trenton, and Newport, Rhode Island. The company offers custom-crafted boats in addition to the Ocean, Modern Classics, and Heritage series as well as luxury charters and sales of pre-owned vessels. In 2012—by which time they had built 300 boats delivered to four continents—the U.S. Coast Guard, after reviewing eleven yards, selected Morris Yachts to build eight new Leadership 44 officer-training vessels. “We employ more than 100 craftsmen and women,” Cuyler says proudly. “This is a preeminent family business.”

With a preeminent family. Today, Cuyler and Cindy Morris live in Yarmouth, where they moved a year ago with their four children. The move coincides with Cuyler’s decision to change his title to owner and to advance Doug Metchick as CEO. “This was a huge move,” Cuyler acknowledges, “the first time in 40 years when a member of the Morris family was not ‘in charge.’” But it’s worked out well. Cuyler feels freed up to address design as well as client needs. “In today’s world, where three microwaves aboard are more important to the mass market, having someone—in this case a Morris, an experienced sailor, the guy whose name is on the company—keep a true compass course for quality product development is something that no other company has and which sets us apart from any other builder in the world,” Cuyler states.

The move to southern Maine has been beneficial for all of them. “Living in a small, close-knit community is heaven with four children,” Cindy says. “We don’t have to drive them everywhere. They can go down the street to see friends, go five minutes away to school activities.” The family expects to ferry a Morris down the coast this summer so they can explore their new water neighborhood in Casco Bay. “Day sails to various islands,” Cuyler says.

It’s difficult to imagine a family more integrated than this one. These days, the Morris children play soccer, ski seriously, and radiate enormous good health and energy. Watching them interact with each other—teenagers, a preteen, a preschooler—their easy relation to each other is apparent; it’s not hard to see the “glue” that binds them. Asked for one word to describe the Caribbean cruise, Sam, Sophia, and Thomas all say, “Yeah, bonded.”