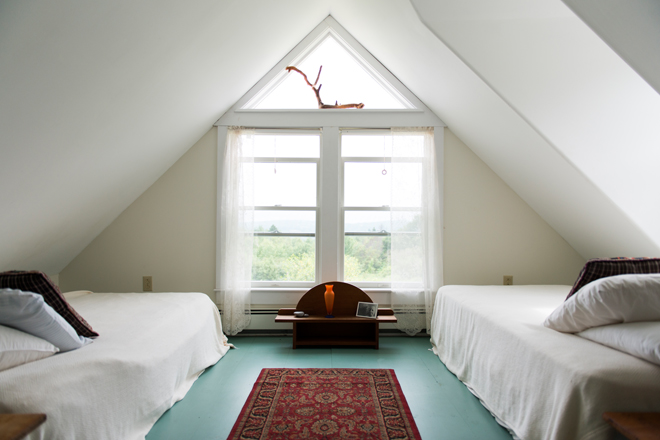 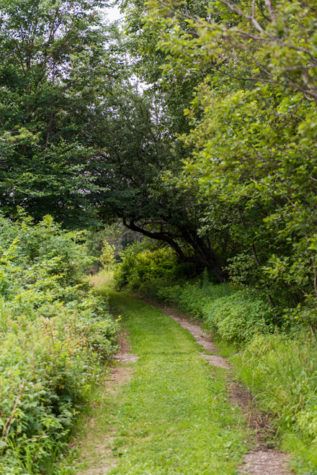 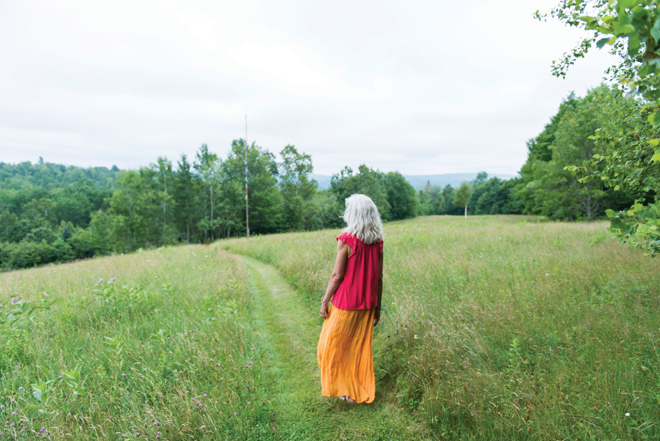 Rolling Meadows sits on 100 stunning acres in Waldo County. Here, Patricia Brown leads the way down a path to the nearby pond. 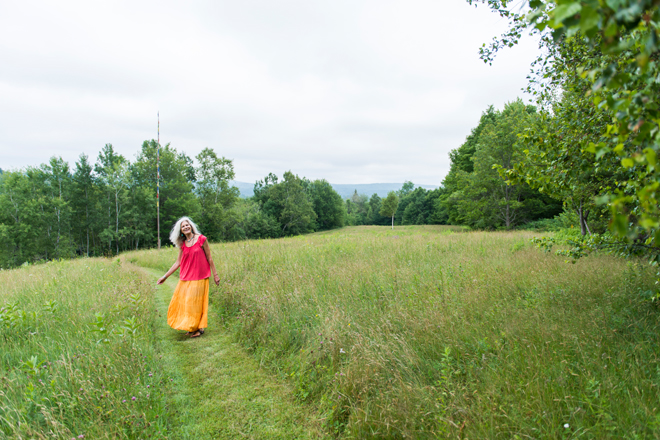 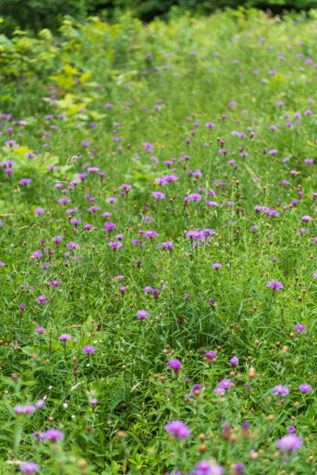 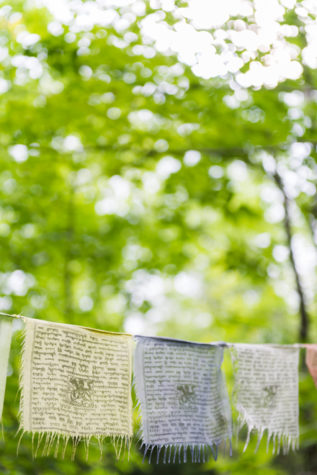 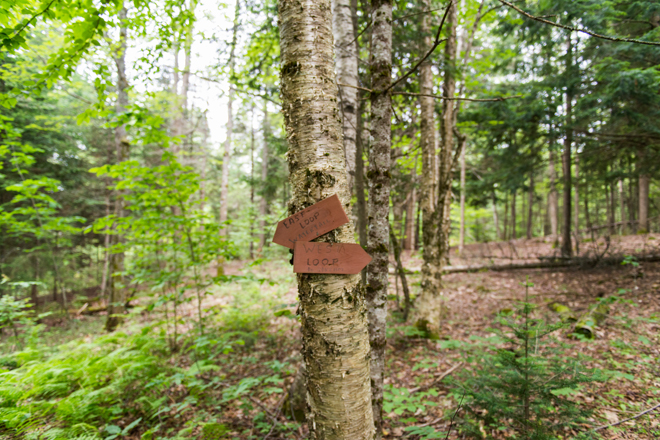 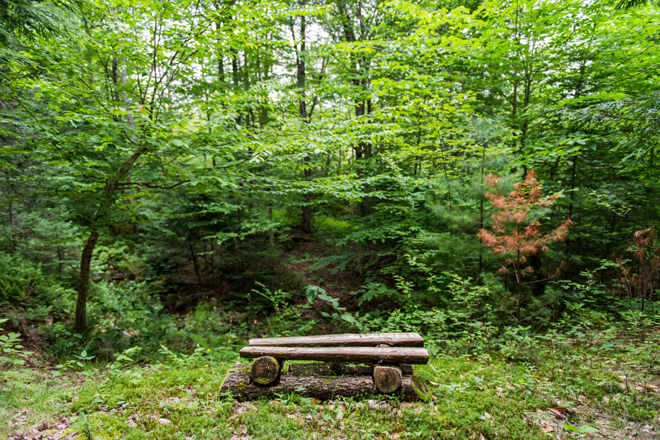 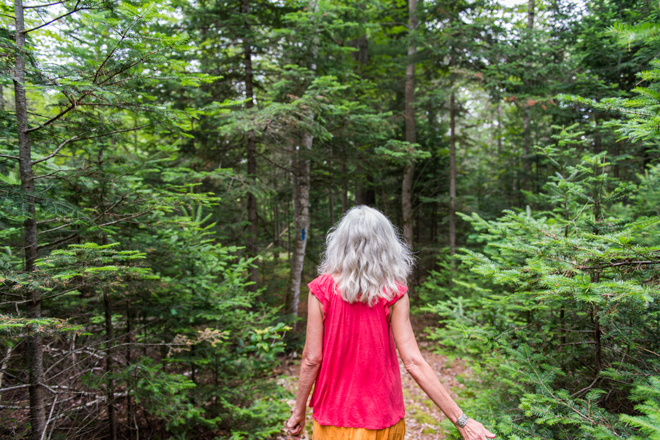 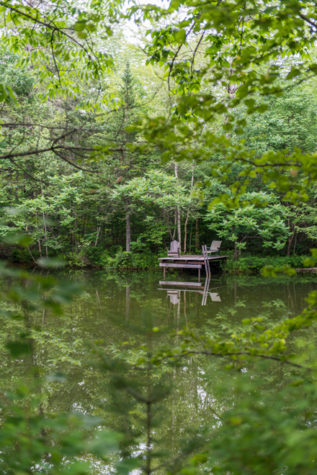 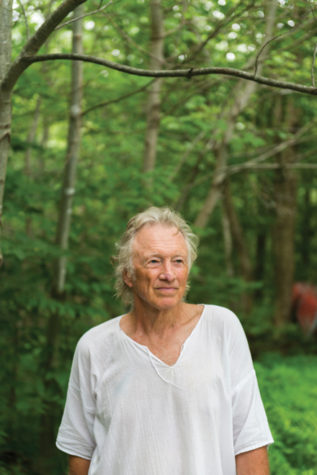 Surya Chandra Das encourages students to learn what's going on below the neck, to listen to what the body tells us about what we need. 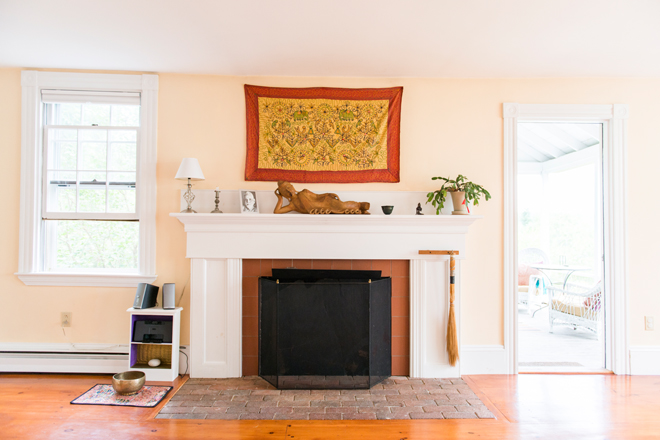 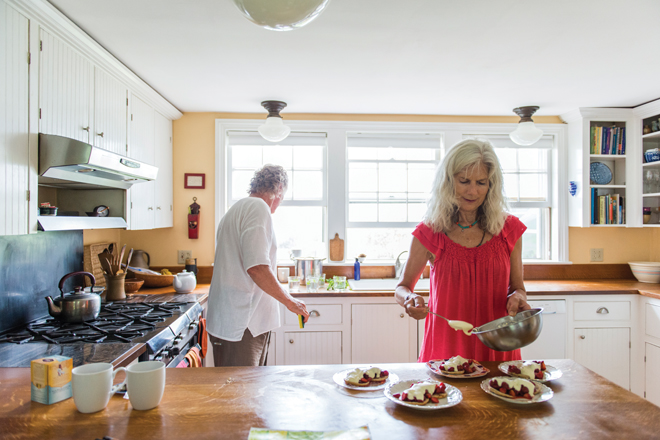 Strawberry shortcake made with berries picked from the property. 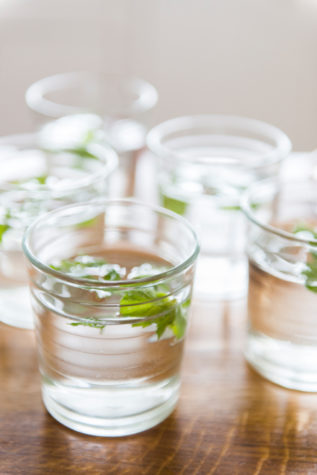 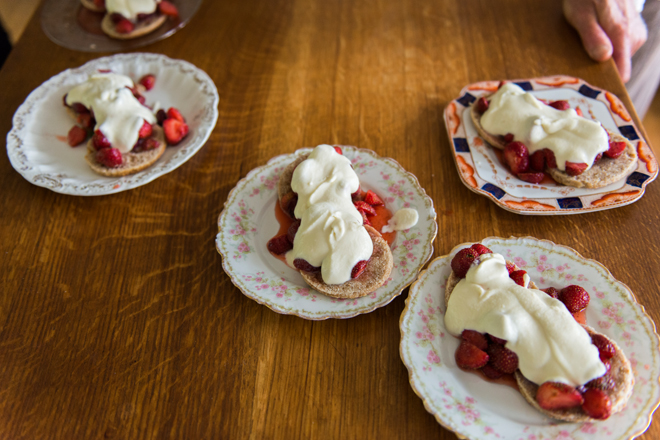 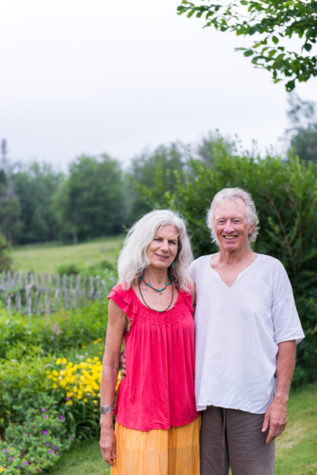 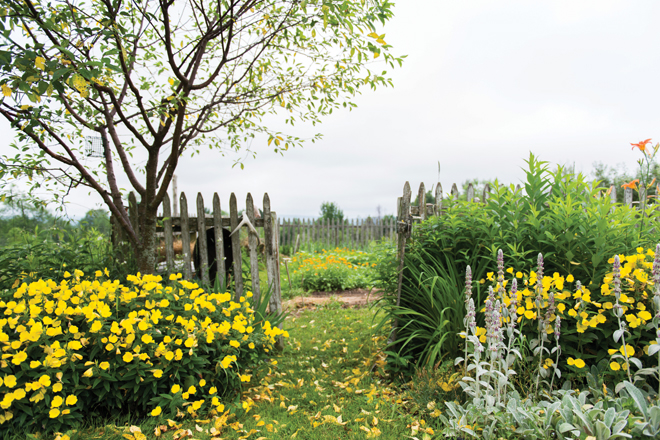 Patricia Brown recently published a book, Sustenance, Recipes and Reflections from Rolling Meadows Retreat, based on recipes developed in her sunny kitchen, using produce from their organic garden, pictured here. 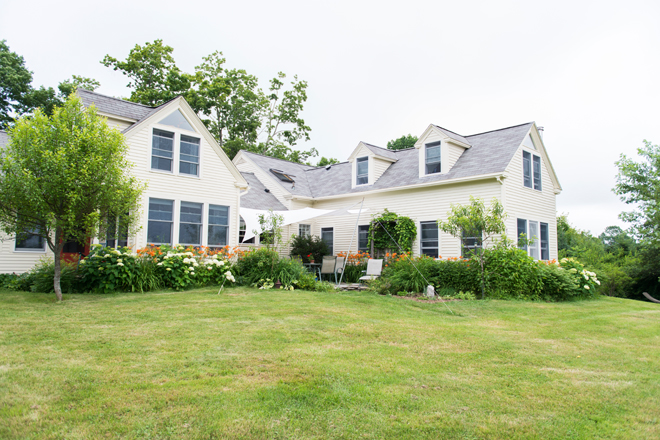 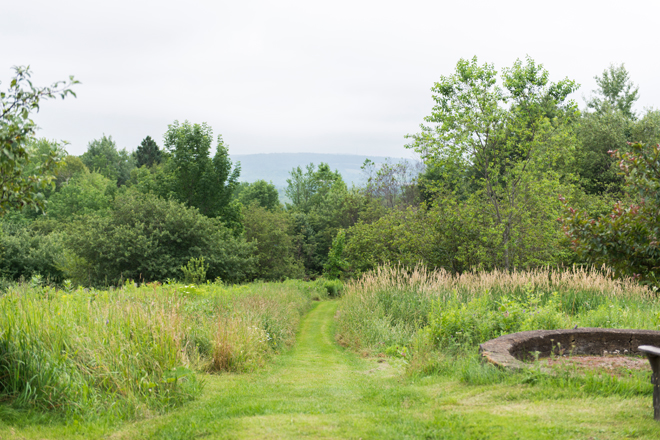 Surya Chandra Das appears beneath the trellis bare feet first, linen pants swinging around his ankles. His linen shirt is white; his hair is streaked with white. Against all that white his face probably looks more tan and lined than it would otherwise. His wife and fellow teacher, Patricia Brown, stands behind him in colors a bird from a faraway continent would wear, her wavy, gray hair framing big, quiet eyes. As I make my way toward them, the view greets me like a third teacher. There is a garden and a sloped lawn that leads to the woods. The horizon is iced in distant blue hills like the ones that brought me here. We’re in MOFGA territory—that humpbacked part of Waldo County where towns have names like Liberty, Unity, and Freedom, and people have been growing food in unforgiving soil for centuries. I had a tummyache of a time getting here, riding hard on the hills leading east to Brooks and this place so aptly named.

I take off my shoes inside the door and follow Brown through a sun-filled living room to the kitchen. Yes, I would like tea. And yes, I would love a tour. The couple conducts approximately six silent yoga and meditation retreats from April to November in their sprawling home. Mugs in hand, Patricia leads me to the second-floor sleeping quarters where guests—ten at most—stay for two or six nights at a time. The bedrooms and living rooms are bright, clean, and simple. We discuss a typical day. A morning at Rolling Meadows begins with meditation, followed by breakfast, personal time, and two hours of asana (practicing yoga positions), pranayama (a type of yogic breath awareness), and meditation. After lunch and personal time is a session of restorative yoga and meditation before dinner, then evening meditation, and finally a good night’s sleep in a room with a view. Three wholesome vegetarian meals are prepared fresh daily, using produce from the vegetable gardens on the property. Back in the kitchen we talk about the not talking. On a Rolling Meadows retreat, participants are asked to refrain from social conversation with one another during meals and free time. The idea is that silence begets listening, and when there is no one else to listen to, people start paying attention to themselves. We find Das on the screened porch, sitting in silence.

Surya Chandra Das was once a lawyer, and before that he was a boy from a farming family in upstate New York. I get the sense that he was a romantic, if obedient young man. After graduating from law school (“It was just what I did, without giving it much thought.”) he and his then-wife and young child rode the tidal wave of young, alternative types to a small town in Maine. He scraped together odd carpentry jobs (“You could live on very little then.”) and eventually secured a position in a small-town practice in Waldoboro. Country lawyers were legal handymen then, fixing all kinds of broken, from murder trials to real estate transactions. The work drained him, but he couldn’t turn down a case. Around the same time an observant colleague asked him a life-changing question—“Why are you doing this?”—he discovered yoga, just as it was making its humble introduction to Maine in the early 80s. Through practicing yoga, he met Patricia, who is also “from away,” and also settled in the midcoast as a young professional. At 29, she was working as a nurse when she received a high blood pressure diagnosis. She sought out yoga (“I only knew it had something to do with relaxation.”), hoping it would change the course of her health, and, eight classes in, found her craving for alcohol and marijuana replaced by a far better feeling. Brown started hosting classes for fellow nurses in empty hospital rooms after her shift let out. She opened a studio in Camden when, “eight of our ten people didn’t know what yoga was.” The yoga classes were organized the way most are: in hour-and-a-half long, physical, Hatha sessions accompanied by breath awareness. But as she delved deeper into her study of yoga as a way of life—incorporating mindful poses and meditation, yes, but also a wide range of observances encompassing the traditional eight-fold path of yoga—she set out to offer residential retreats in Maine and abroad. She set out to offer time. Silence. Peace. Space for self- inquiry. Happiness that doesn’t come “from the acquisition of things,” as Das so deftly put it.

Over a dozen years ago, Das and Brown found the 1840s farmhouse in utter disrepair. Old equipment sat rusting in untended fields. Rain poured through a hole in the roof. But 100 beautiful acres is 100 beautiful acres, and these are majestic, with paths leading through fields of wild grass into thick, moss-coated, Maine-style woods. And then there is the view. The couple leaned hard on Das’s carpentry experience when renovating the house—“Running silent retreats just doesn’t bring in those kinds of funds,” Das explains with a crinkly smile. Twelve years ago, Brown came home from a yard sale with two baby lambs, which turned into the flock of sheep we watch grazing from the screened-in porch.

Das and Brown seem happy with the life they’ve created for themselves, though I imagine it might be hard, at times, to share ones house with strangers. Das built Brown her own cabin, nestled into the slope, where she goes to be alone. He is working on his own near the pond. They take turns teaching every other retreat, assisting with the cleaning and cooking when it’s the other’s turn. In the winter, they travel to warmer places to teach, to soak in different silences.

The aim of Rolling Meadows meditation and yoga retreats is to send people back into their lives “rested and renewed with greater wisdom and compassion and clarity about what truly gives our lives sustenance and meaning.” In some skeptical corner of my mind I wonder how long the peace could possibly last for guests as they head back down the dirt road toward the rest of the world where the optimal pace is as fast as you can go, as much as you can possibly fit in. Das and Brown remind me that retreat is an ancient concept. For centuries, people have intentionally extracted themselves from the day-to-day to live the days following with a little more intention, at a slightly slower pace. And we’ve encountered them, haven’t we? Those people who sacrifice whatever it is they sacrifice to be like the rock in the river that won’t budge, while everything around it runs by? Das and Brown are rocks like those. They are also people still in process. Brown tells me self-inquiry—“who am I beneath the personality and the presentation?”—continues to inform her life. And Das and Brown are not nearly egotistical enough to believe they know what people need. Instead, they trust that with the support of yoga, meditation, silence, and the natural world, the peace that is always there will reveal itself.

Yes, I’d like to take a walk to the pond. And yes, I’d love some strawberry shortcake. The smell of the fruit fills the kitchen, mingling with some oily scent I’d pegged as lavender, and Brown tells me is something else. We eat the biscuit and strawberries slowly, and with homemade whipped cream. We talk slowly, too, perhaps because we’re petering out and letting ourselves. I’m looking forward to the long ride home by myself, and they’re looking forward, always, to the peace and quiet to come.