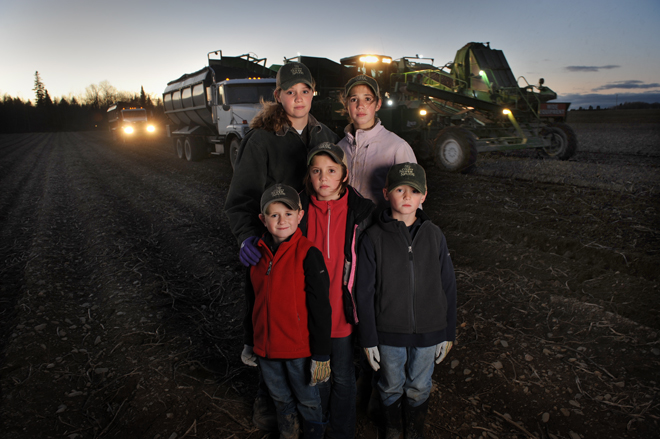 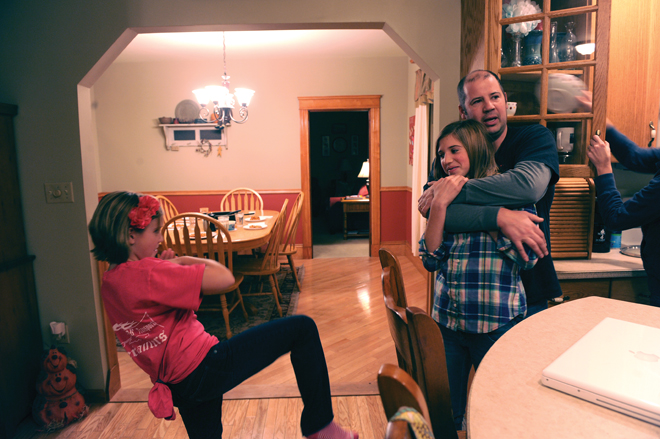 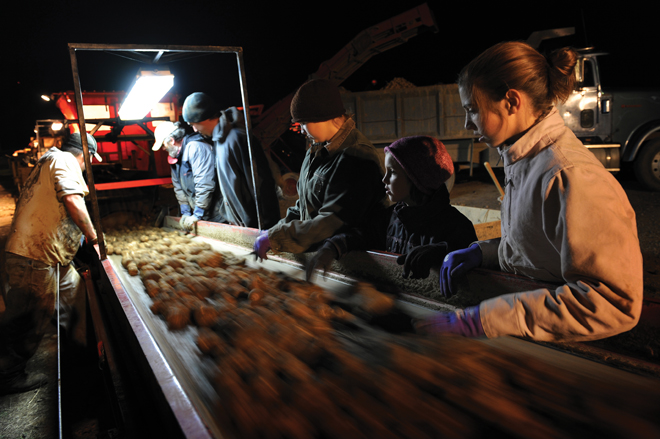 Though less common than in previous decades, many young people in Aroostook County still help out on the farm. Wade McCrums daughters from left, Dayna, 15, Samantha 10, and Keara, 13, look to toss out blemished potatoes as evening closes in. 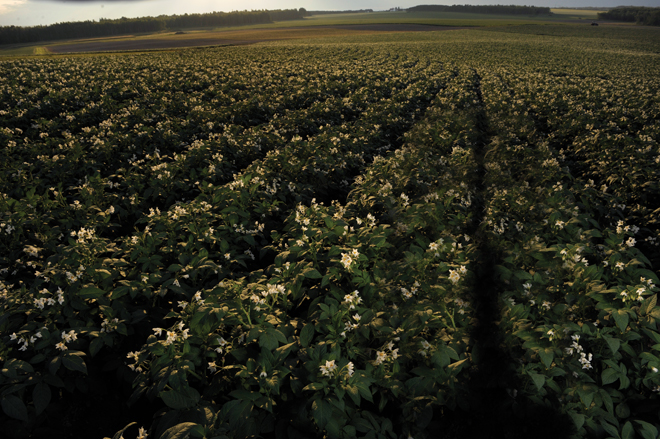 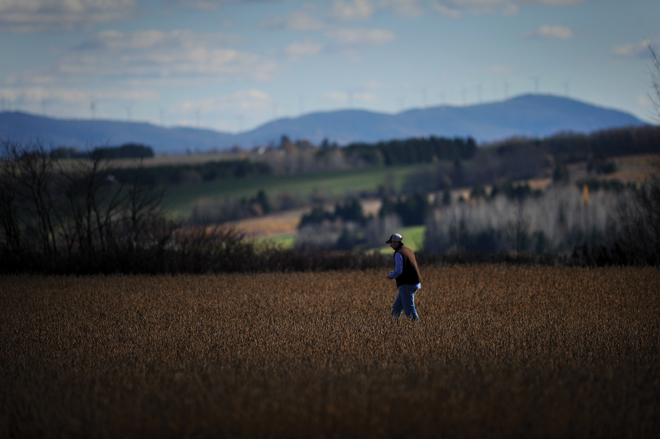 Jason Woolard of Mars Hill checkes a soybean field in Presque Isle to see if it was ready for harvest. He is a County Super Spuds partner and cousin to the four McCrum brothers he is partners with. The potato fields are rotated with grain crops to keep the soil nutrients from being depleted. 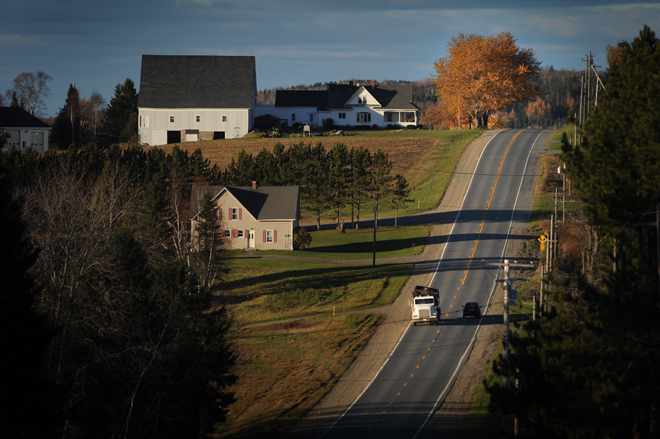 A potato truck moved south along Route 1A near Easton Center. The Flewelling farm sits atop the hill. 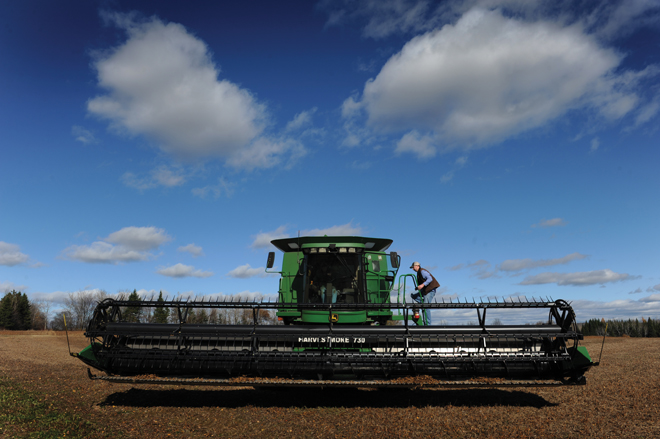 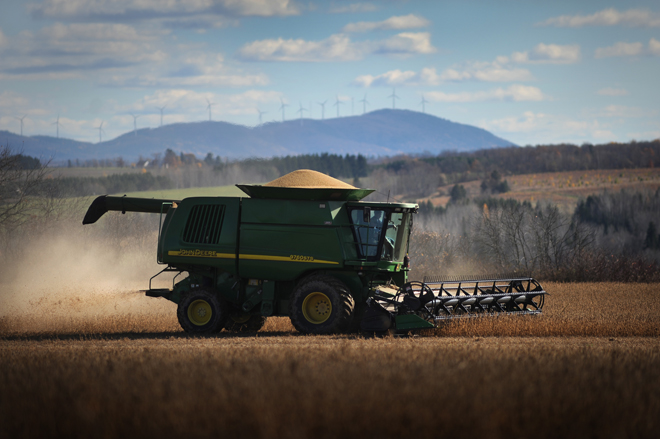 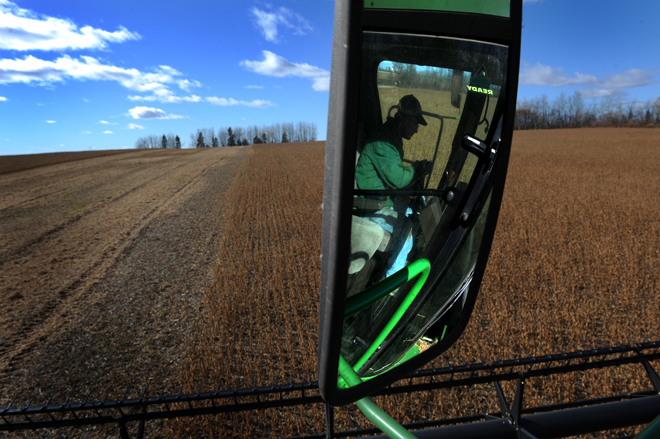 The thirteen-decade farming heritage of the McCrum family

Darrell McCrum—great-great-grandson of Lemuel McCrum, great-grandson of Darrell McCrum, grandson of Dana McCrum, and son of Jay McCrum—is the vice president of operations at County Super Spuds, one of the largest potato farms in the state of Maine. Thirty-eight years old, a father of two, the husband of his high school sweetheart, and a deacon at his local church, Darrell is the oldest male in this fifth generation of McCrum men who have been farming the rolling pastures of their hometown for nearly 130 years.

“We’re pretty unique, pretty special,” McCrum says of his vast clan of uncles and aunts, 12 first cousins, and, to date, 29 youngsters. Most of McCrum’s family is connected to County Super Spuds in at least an indirect way; five of his cousins are involved directly in the farm’s daily operations. “Like any family,” McCrum says, “we’ve got our issues, but we work hard to resolve them. It’s all about respecting each other, and realizing that we’re all going to do things in a different way.”

On a mild Thursday in late August, I rode shotgun in McCrum’s pearl-white Chevy Silverado as he drove north on Fort Road—also known as Route 1A—surveying the 7,500 acres of his family’s property. Of those acres, about half is given to the growing of potatoes, while the other half is given to the cultivation of grain.

Each year, roughly 20 percent of the County Super Spuds potato crop travels 12 miles north, to the McCain plant in Easton, where they’ll be processed and packaged and sold to wholesalers like Cisco and restaurants such as TGI Fridays. The remaining 80 percent of the crop will travel to plants in Connecticut and Massachusetts, owned by potato chip companies like Frito Lay and Cape Cod, or else they’ll be trucked to the McCrum family’s new processing plant in Belfast. Annually, County Super Spuds harvests about 120 million pounds of potatoes—at a rate of about 30,000 pounds per acre—an activity which, depending on the rain, could begin in a matter of days, or weeks.

As we drive, McCrum’s phone doesn’t stop ringing. While telling me about the history of this land and the challenges that face his shrinking agricultural community, McCrum patiently fields questions from the 60 or so men who—operating tractors, combines, and spray rigs, or toiling in shops—are spread across a distance of nearly 40 miles. With storm clouds brooding on the horizon, and the sky boiling over the mountains to the east—the ridges of which are pocked with 28 massive wind turbines that separate Aroostook County from Canada—so much hangs in the balance. Too much water in the fields, and the potatoes will become vulnerable to late blight, a fungal disease that, if not caught early, can rot out an entire crop. Not enough water and the porous tissues that enable the potato to interact with its natural environment will not open, and the potato will not grow right.

“How you doing pardner?” McCrum asks the next caller, addressing him with the same term of camaraderie by which he had just addressed the first. Out here—in this dynamic network of growing and communication—everyone’s a pardner. “Doing good, doing good,” McCrum tells an independent combine operator whom he often hires when impending rains force his boys to work more quickly. “We’re all ready to cut if you got some free time.”

These delicate schedules of watering, spraying, cutting and harvesting—schedules determined in large part by the careful scouting and inspecting of the potatoes themselves—is something akin to a science, although McCrum, even after studying agricultural business and economics at the University of Maine, assures me that growing potatoes is “more like an art.”

Despite the fact that McCrum could tell me more than I’ll ever need to know about the way sugar content and heat can affect the subtle coloration of a single potato chip, his knowledge of this northern kingdom—a knowledge that seems to have moved via some mystical force between one ancestor and the next—is probably more intuitive than rational. As McCrum riffs off the names of field after field—areas which are referred to by the surnames of the families (Shaw, Smith) that historically farmed them (“we do this to give some respect,” he says)—it’s easy to imagine that McCrum’s brain is a kind of algorithmic priority machine, working in concert with some four-dimensional mapping system that can account for every square foot of dirt from Houlton to Presque Isle.

Earlier that day, when I met McCrum down at the main farm shop, he was conversing with a local contractor about where to lay a foundation for a new 60’ by 120’ storage building. There was another building next to it—a massive awning, really—beneath which stood two Lenco potato harvesters, giant green insect-like monsters that cost $865,000 apiece. The machines, which are programmed to work the fields via internal global positioning systems, were built and shipped from Michigan, on three separate trailers, some ten years ago. That first series of harvesters, however, didn’t stand up to the rocky and rolling pastures of the County. “We busted ’em up pretty badly,” McCrum says. After giving Lenco plenty of feedback, the farm was sent new County-tough machines that were “a lot more rugged.” The great irony of this investment: the harvesters, McCrum tells me, are used about five weeks per year.

But for a farmer like McCrum—still shy of 40, he’s relatively young to be managing such a large-scale agricultural operation—every piece of technology, from the iPhones that most of his boys keep handy to the navigational systems of the harvesters, is essential to maintaining productivity.

He tells me the story of an older farmer—“He’s 70, but he farms like he’s 30”—who, upon hearing about County Super Spuds’s use of GPS-operated machinery, was skeptical at first. Even in the last three or four decades, many of the old timers in this area have witnessed a dizzying evolution of farming methods that, in their lifetime, began with horse—as in animal—power. But it was that same farmer, McCrum says, who later confessed, “I could always tell which fields were yours because the rows were all crooked, but now, they’re all straight.”

As compelling as it might be to imagine Darrell McCrum as a symbol for the new face of modern farming—a few years ago, Frito Lay flew McCrum and his son, Colin, to Hollywood, for an ad campaign—there’s a great deal about him, and his family, and the farm they maintain, that is deeply rooted in the distant past.

Unlike many Maine kids, McCrum never had an itch to leave home or live somewhere else. “Being a farmer,” McCrum tells me as we drive past a vaulting field of bright green and very healthy looking plants, “is all I ever wanted to do.” He can still remember the day in fourth grade when his own father, Jay, woke him up at 5 a.m. and told him that he wasn’t going to school, but instead was coming out to the fields, to work with the men. “To have my mom give me a lunch pail, and tell me to go off and work with dad for the day, that was the best feeling in the whole world,” he says. “I became a man that day.”

And as much as McCrum enjoys the fruits of his labor—he and his family own a camp on a nearby lake, and they like to go waterskiing on the weekends, and hunting after the harvest each November—he knows that his connection to this land is something that has been passed down by those who came before. McCrum often recalls the influence of his grandfather, Dana, who died of a brain tumor in 1996 at the age of 70. Between trips back and forth to hospitals in Boston during the fall of his passing, Dana finally told his sons and grandsons that, rather than stay by his bedside, they should get back to the farm and work.

McCrum also believes that his good fortune might be a consequence of other forces at work.

“The Lord has been very good to us,” McCrum tells me while driving down a muddy road into the middle of a field to the west. “We’re all god-fearing men.”

After parking his truck, I follow McCrum between two rows of potatoes—two rows among, literally, thousands. Around us, as a wind crawls east toward the border, the world feels fertile, and infinite, the earth plentiful and vast. McCrum kneels in the dirt, pulls up a plant, and a half-dozen oval orbs, their skin glowing more golden than any potato I’ve ever seen, rest in the rich, coffee-colored soil like magic beans. I ask McCrum how often his family eats the potatoes he grows. He snickers. “Every day,” he says.

Past lunchtime, on the ride back to the shop, McCrum takes me to the original settlement of his great-great-grandfather, Lemuel, who, from Rolling Dam, New Brunswick, came to Maine in 1886. McCrum’s own house, built upon a piece of Lemuel’s land that McCrum cleared himself, has a broad view of his family’s fields, as well as a swimming pool for his kids. When I ask him what they’re up to today, he tells me that his six-month-old daughter, Catherine, and two-year-old Colin, are with his wife Erica, at the John Deere store, buying a new toy tractor that Colin was promised as a reward for good behavior. When I ask him how Erica likes this life, a life which, for McCrum, sometimes begins at 4:30 a.m. and doesn’t end until midnight, he laughs. “It takes a special kind of lady to be married to a farmer,” he says. “Sometimes, when things get busy, I’m sure she feels like a single parent.”

Then I ask McCrum if he ever wishes that he hadn’t inherited such an empire, wasn’t defined by such an authoritative title as vice president of operations.

“There are times I wish I could be in a tractor or combine, not worrying about anyone,” he says. “I’m called the VP of operations, but to everyone else, that means nothing. We’re all just as important,” he says. “And none of us are in this for the fame or fortune. Really, I’m just a stinkin’ farmer.”