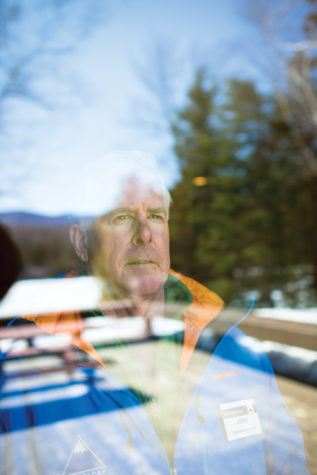 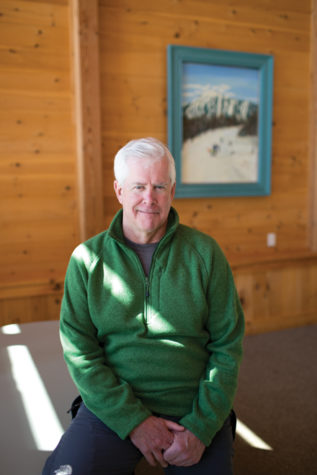 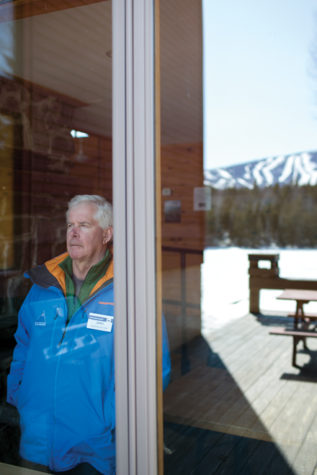 John Diller and the mountain grew up together. 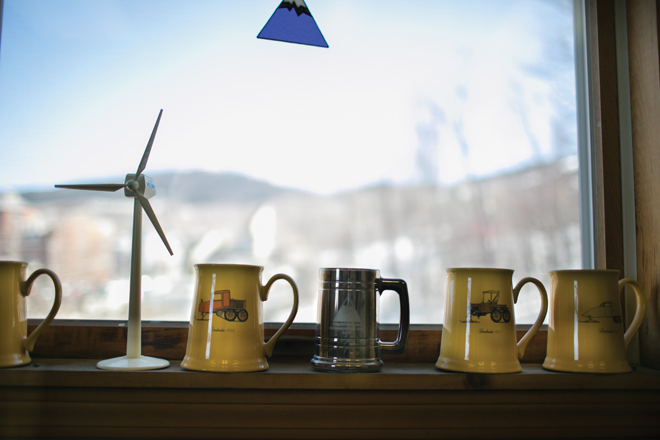 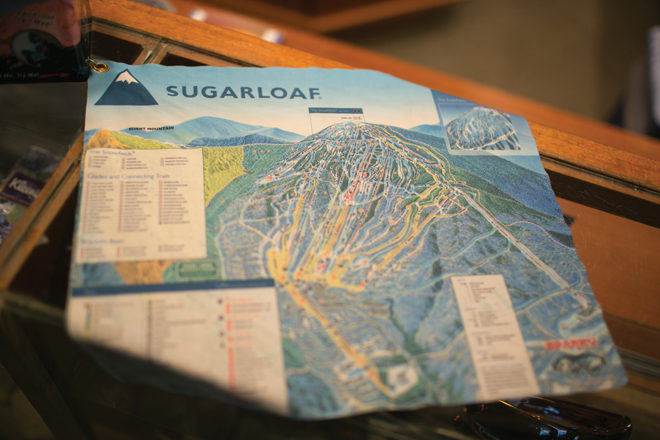 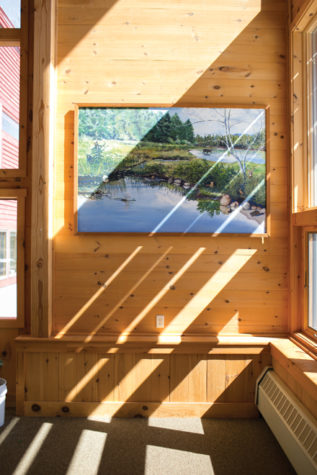 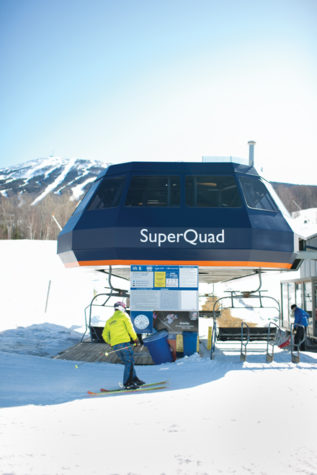 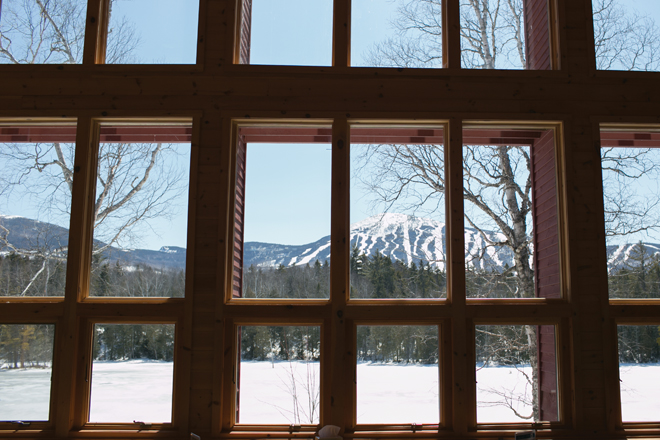 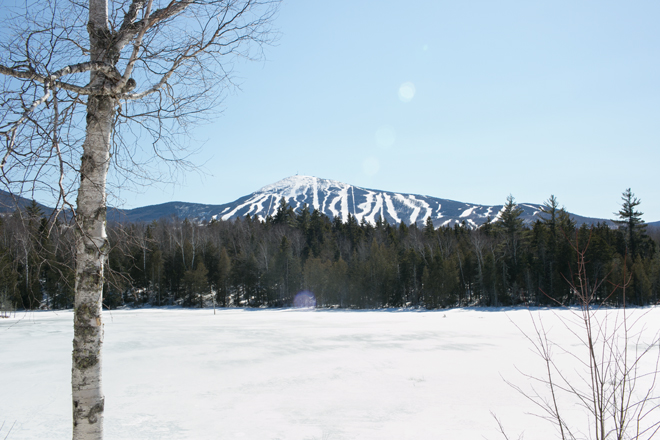 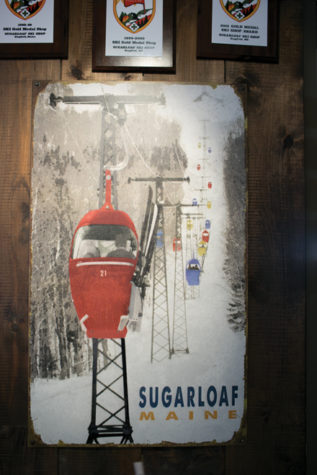 Dillers office has a view of the mountain so he always knows the snow conditions. 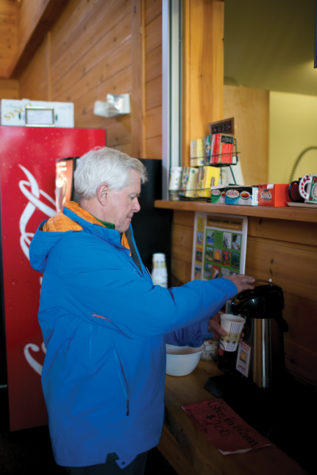 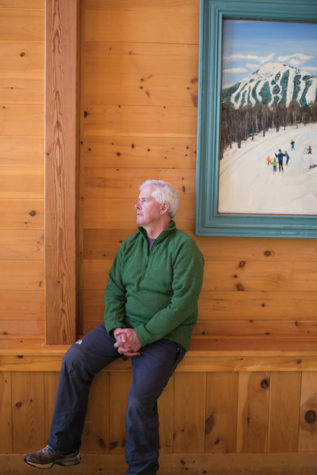 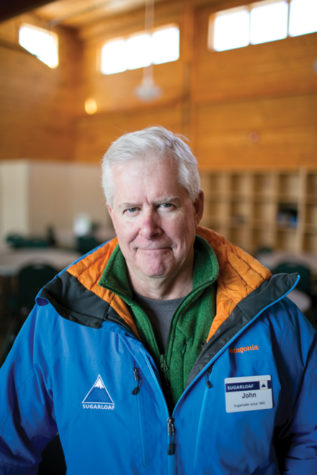 Imagine it’s mid-February in Maine, Friday night, and you’re driving the last stretch of dark road from Kingfield to Sugarloaf. A line of cars snakes behind you for miles, and inside almost every one of them is a Sugarloafer, making the weekend pilgrimage. You keep telling yourself that you’re almost there. Because you’ve got to be there. You’ve been following the Carrabasset River for a good while now, and it glints in the moonlight. What you’re really waiting for is that famous bend in the road up ahead—the one that Sugarloaf president John Diller calls Oh My Gosh Corner, where the biggest ski hill east of the Rockies reveals itself in all its glory.

“A skier’s mountain,” is what Diller calls Sugarloaf. “Rugged and unpretentious.” Even though I’ve rounded Oh My Gosh Corner hundreds of times since I was very young, I’m still not over the quiet thrill of the spectacular view. Diller doesn’t seem over it either. “Think about all the places you’ve skied,” he says. “Where do you get a look at the whole thing at once? Nothing is hidden here. It’s big. It’s steep. It’s huge.”

He and I are driving around the mountain in his SUV now. It’s autumn, not February, and the view up above is a study in lush greens. Pine trees flank the many trails, which are a lighter shade of chartreuse and run, like so many tributaries, toward the base lodge. Everything has the air of quiet expectancy. The mountain patiently waits on two simple things:  snow and skiers. Diller laughs and says, “When you have a great snow year, ski operators are the smartest people in the world. When you have a bad year, you’re really stupid and everything is wrong. Last year was fantastic. We got early snow.”

He’s a low-key, modest man with a muscular build and a shock of white-gray hair, who’d rather be scheming about “ski ops” in his black and yellow Nike sneakers than talking to a reporter about himself. He worked his way up quickly through the ranks at Sugarloaf: “I came here in 1970 as a ski instructor and I never left.”

Born in Skowhegan in 1947 to a dentist father and a kindergarten teacher mother, Diller fell in love with skiing right after his father died unexpectedly. Diller was 12. “It was a bit of a tough deal,” he says. “For the next few years my mom was a single working mom. She was amazing.” Diller’s mother took his brother and him to their aunt and uncle’s in Bethel for Christmas. Diller’s uncle was one of the founders of Sunday River. “There was a big box under the tree. Ski boots—much to my disappointment. I thought they were skates. But we went up to Sunday River. It was open on Christmas Day. They had a rope tow. By the end of the day I could ski all the way down. I was hooked.”

After that Diller and his brother skied at Sugarloaf whenever they could “beg, borrow, or steal a ride. We could get a junior pass for $22 for the year. Pretty good deal.” They were obsessed and did anything to get out on the snow: paying friends for gas money to the Loaf, and when that didn’t work they’d ski the local Skowhegan rope tow.

For Diller the thrill was speed, and he raced for the Skowhegan high school team. “Back then we used trees instead of gates. We went out in the woods and cut alders. It was ski ski ski. All about skiing. Then I got really into bump skiing and I got pretty darn good. It seemed to be a natural fit. I think my claim to fame is that I brought the helicopter trick to Sugarloaf.”

Most memorable wipe out? “I hit a rock on Upper Tote Road in high school. Fifteen stitches in my leg.”

He went to Northland College in Wisconsin, and it’s no surprise that Diller skied long and hard for the ski team there. It was his first time out of Maine and he loved it. He dated his Maine girlfriend all the way through college. Then they “spent a summer in Jackson Hole. Got married and came back to Maine. To Sugarloaf.”

After that first year as a ski instructor, Diller got a chance to run the mountain’s freestyle program. During summers he helped at Turner Mill, a lumber mill back in Skowhegan that his stepfather owned. He says, “I learned more at that lumber mill my first summer than I did my four years of college.”

Diller became vice president of operations at Sugarloaf in 1982, working for Warren Cook. When Diller took over as president in 1998, it was with a “really good senior team. And I rely on that team today. They are so strong. They tell me exactly what they’re thinking.”

Most people who’ve skied Sugarloaf all their life have a working definition of what a real Sugarloafer is. Here’s mine: any child or adult crazy enough to spend long, cold chairlift rides freezing their proverbial fingers and toes off on the Timberline Quad again and again in high winds, all because the snow fields out back are open. Both of Diller’s adult children, Heather and Brecken, are Sugarloafers who now live in Seattle. They grew up on the mountain after their parents divorced, and went to Carrabasset Valley Academy. They still love to ski. Diller himself “skis as many days as I am old. Last year I turned 66. I always try to get out for a few hours in the morning.”

It turns out 60 percent of the skiers at Sugarloaf are Mainers. Diller says, “The typical ski family is younger. Their kids are in our children’s ski programs—minicuffers and bubblecuffers. What I’ve seen is that after kids go to college, they go off and do other things. But then when they have their own kids, they come back. It’s a ski phenomenon.”

Diller and I climb out of his SUV and walk to the front of the base lodge. Behind us is the imposing Bigelow Range, in front of us the iconic, triangular peak of Sugarloaf, with the shoulder of Burnt Mountain to the left. “If you look left at the top of King Pine,” Diller says, “You can now cross over that saddle and then climb and you’ll be able to ski the glades down Burnt. We’re up there right now cutting. Continuing that whole glade concept into the upper part of Burnt. Obviously you need real snow. But I think the climb will be well worth the effort.”

And about the snow? Is he superstitious? “Some people talk about checking the Farmers Almanac,” he says. “But what I believe is that to have a strong snow year, you either have a good fall of early snow or a good winter or a good spring. Last year we had all three. Some days we had cars parked all the way down to the Rack. The word was out that this was the place to come.”

Now he points to the top of the mountain and the Gondi Line trail: “We just took an excavator up there and flattened it out—finally pulling out the stumps and rocks. The other big thing we’ve done the last two years is to install new snowmaking guns on the hill.”

This is the groundswell of change in the ski industry today: snowmaking, snowmaking, snowmaking. The new Sugarloaf HKD snowguns are high-performing and much more energy-efficient than the old screeching models that hurt your ears when you were unlucky enough to ski past them on Sluice.

I ask him about the trend of warmer temperatures and melting snow that have vexed ski mountains all over the world. “I don’t question that climate change is here,” Diller says. “It’s here. What kind of impact will it have on ski mountains? Well, we’ve invested so much in snowmaking that we’ve sort of insulated ourselves from it to some extent. With these new guns we can run four of our trails at once.”

I ask him what it takes to operate a mountain like Sugarloaf. He smiles and says, “For people who think they want to go into the ski business, get a job making snow or doing something on the mountain. Make sure you like it. And you’re going to have to also like people. If you wake up with your cup half empty, go do something else. We get enough negative vibes as it is. It rains enough.”

Diller is nothing if he isn’t a straight shooter. “This thing,” he says, “was never about how I always wanted to be president. It wasn’t like that at all. I was just the next guy in line.”

He takes great job satisfaction in the connection between the town of Carrabbasett Valley and the mountain: “I don’t think there’s a mountain out there that has such a tight relationship with its town. The outdoor center. Town owns it. We run it. Golf course. Town owns it. We run it. I think the taxes per capita are some of the lowest in the whole state. It’s like we’re a one-mill town, but the mountain is the mill.”

Diller certainly knows his way around lumber mills and mountains. The town, the mountain and Diller—they grew up together, and his imprint is all over the place. But how long will he continue to drive around the bend at Oh My Gosh Corner? Is there legacy talk in the air?

“I’m at the age,” he says, “when you start thinking about what you’re going to do when you’re done. I wonder what a new person would do. And you have to be very careful about the blinders you have on when you’ve been doing something as long as I have.”

And his legacy? He smiles and says, “That’s a joke. This is a ski mountain. This is not about me. It’s all about the fun.”