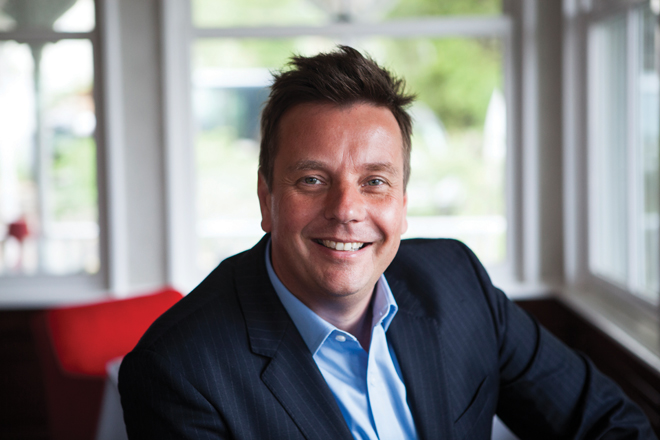 You and Oscar are Dutch. You worked in the tour industry for a while, and Oscar was a pharmacist. You’ve done different things; you’ve been to many different places. Why did you choose Maine? We were at a crossroads in our lives. I had been consulting for hotels in the Far East and the Middle East. Oscar, as you said, had a pharmacy that he owned and ran for 10 years. He was ready to sell his pharmacy and I was ready to do something else. We were vacationing in Maine in 2003. It was a leaf-peeping trip and we did a three-week tour from Boston to New Hampshire to Maine, Vermont, Connecticut, and the truth is that I fell in love immediately with New England. I remember we were standing on a beach in Ogunquit and I said to Oscar, “Why don’t we move here?” He said, “Well, I can see myself living here on the ocean. I don’t see myself living here for long, but I can see myself living here on the ocean.” That was the beginning.

You moved around for several years before you settled on Camden. Why did you decide to put down roots here? Camden felt right. It is a year-round community. As most coastal towns are closing down for the winter, Camden is vibrant in the winter as well, with lots of restaurants and with Rockland nearby with the Farnsworth Museum and people living there year-round. It felt comfortable.

We stayed at the Camden Harbour Inn as part of a recent 48HRS excursion for Maine magazine, and although the weather that particular weekend was dreary, we still had a great time. I’m glad to hear that. Weve worked very hard to create a place where people feel comfortable, where they feel like they can be themselves. I don’t like stuffy, snobby hotels. Even when we are on the higher-price level, I don’t think it should mean that you have to sit up straight, or that you have to behave to a certain degree. I still think that you should be able to walk into our hotel in your shorts. Come in as you wish because it’s about you. It’s not about me and my rules and regulations.

A lot of people eat at Natalies as part of a special occasion, such as a birthday or anniversary. Is that one of the things that you had hoped to do–to create a place that people could really make memories in? I think traveling is about making memories, about experiences that are new and different, coming home with new, refreshed ideas; get inspired, and maybe implement a couple of the things that you saw during your travels in your own life. Natalie’s has been an interesting experience. It’s very difficult to run a restaurant, especially when you are in a remote area like Camden. It took me a couple of years to figure out that we are a fine dining restaurant, and it’s okay that people are not coming in three times per week. They come in maybe once every two weeks to celebrate something or have a special dinner. Now when you look at reviews and what people say about our restaurant, they say, “It’s expensive, but it’s probably the best experience I’ve ever had in my life.”

I think you can get to a place where you value yourself enough to stay, You know what? This is going to contribute to my well-being. You have to decide, This is worth it to me. Right. I think the danger in this industry is that the industry is changing really fast right now. People all over the world get a little hesitant paying so much money for a room because how do you know that you actually get what you’re paying for? I think that is a challenge for a lot of hotels, even for a Ritz-Carlton and a Four Seasons, to find a way to make sure that the people understand what they’re doing is worth paying for and that you actually should go there.

You should do both. You should stay at an inexpensive hotel when you’re on a trip, and then pamper yourself at a luxury hotel, but then pick one that is really going to pamper you. I think if you do your research, you can figure it out.

Listen to our complete interview with Raymond Brunyanszki on the Dr. Lisa Radio Hour, available on iTunes and on our website.