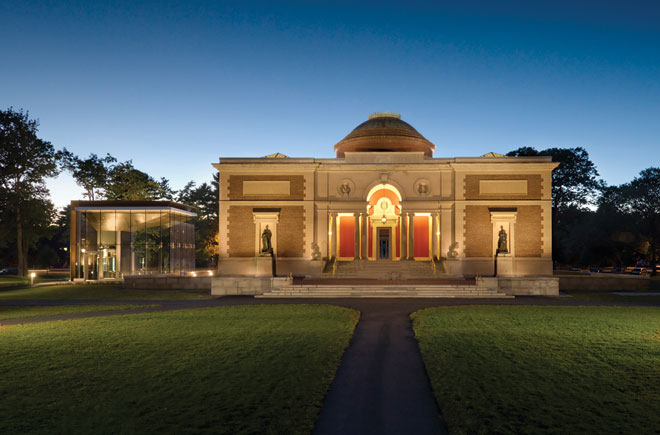 It’s easy to lose yourself inside the Bowdoin College Museum of Art. Not because it is big or grand, but because it houses pieces that demand a deeper look, a lingering presence. Art is all around here, even before you step across the threshold into the hallowed halls. It begins with the walls themselves, the glass entryway, the domed ceiling. The experience of art is grounded in each brick, vaulted from each stately column.

This distinctive structure has two histories. The first story begins in 1894, when Charles Follen McKim designed the landmark Walker Art Building. McKim’s work, which also includes the Boston Public Library, the Brooklyn Museum, and the Pierpont Morgan Library in New York, is a stunning example of the architectural and decorative ideals of the late nineteenth century. Balanced and symmetrical, the design of the museum is Renaissance Revival, with a façade made of brick and limestone. Wanting the structure to “show the purpose for which it is to be used,” McKim instilled that philosophy into every decorative element. Bronze statues of Sophocles and Demosthenes stand guard on either side of the building, while two large lions flank the stairs, formidable paws resting gently on marble globes.

But these stairs, and this grandiose entryway, are no longer in use. The second history, which begins in 2003, explains why. Over a decade ago, Bowdoin College began a process of renovation and expansion to preserve the 100-year-old building. Architects Machado and Silvetti Associates of Boston were called in to create a design that would protect the historic building while expanding the number of galleries from nine to fourteen. The interior was completely renovated, which added over 2,000 square feet of gallery space, but the most striking addition is the entryway. Made of glass and bronze, this rectangular pavilion features a glass elevator and a “floating” steel staircase. Now, instead of ascending the staircase passing lions and philosophers, visitors descend into the earth via a modern marvel. Like McKim’s original design, the renovated museum reflects—and enhances—the art within. Modern and classical. Contemporary and historic. Old and new. All in perfect balance.