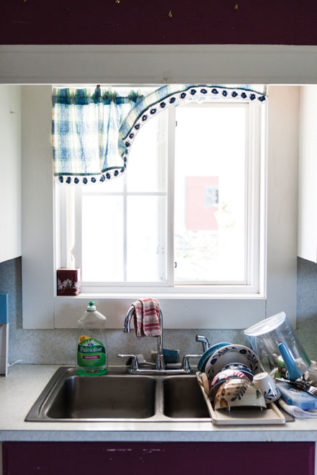 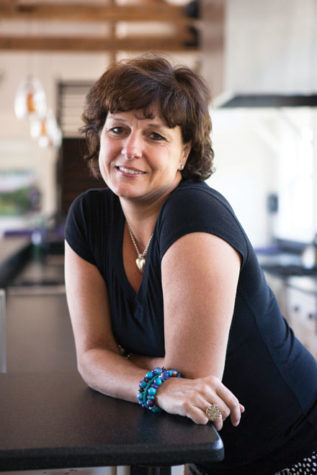 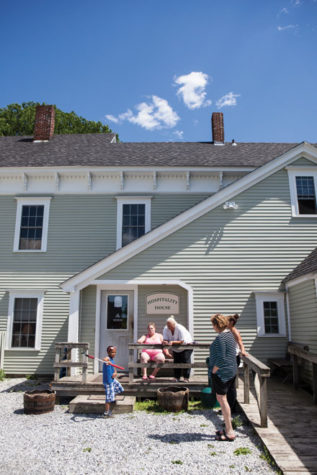 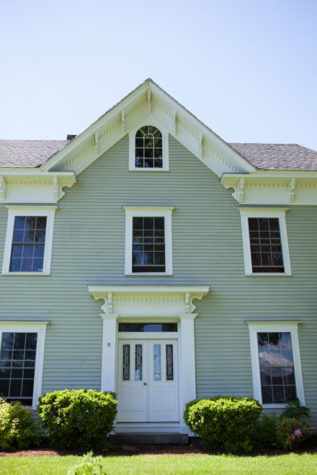 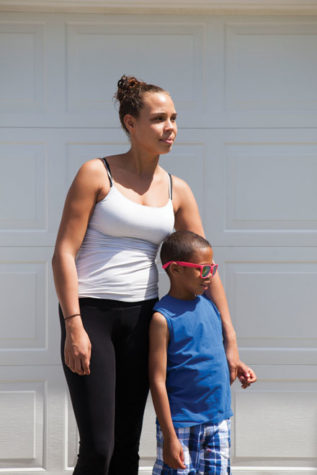 Kahdejah and Khaliel have found hope in the services offered by Hospitality House. 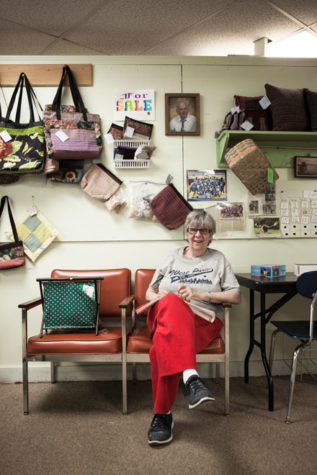 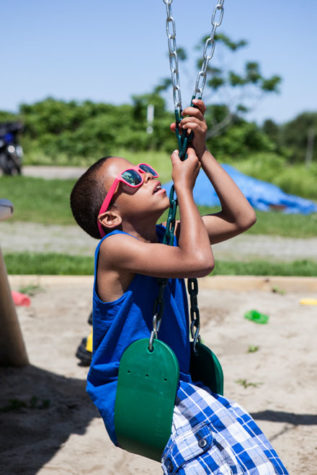 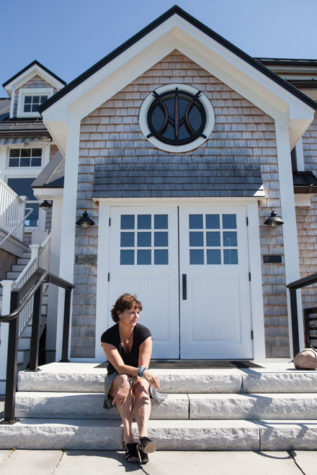 Bettina Doulton at Cellardoor, with the winerys doormark symbol superimposed on the window above. The doormark has become an important symbol for Doulton and those who work at Cellardoor. 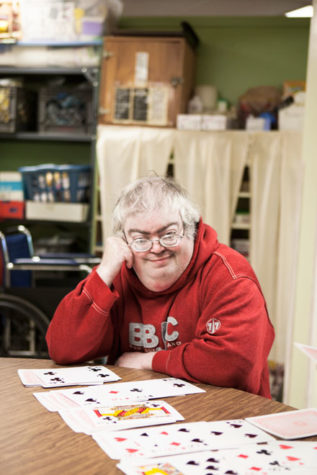 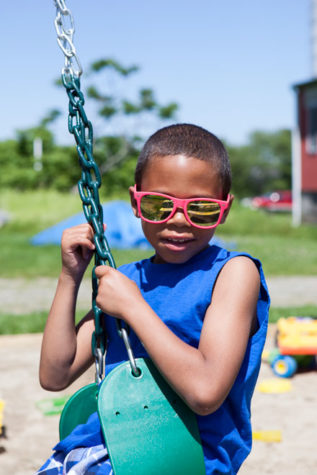 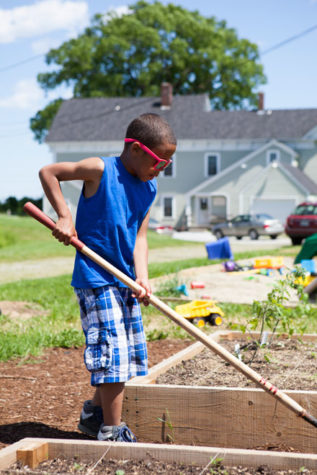 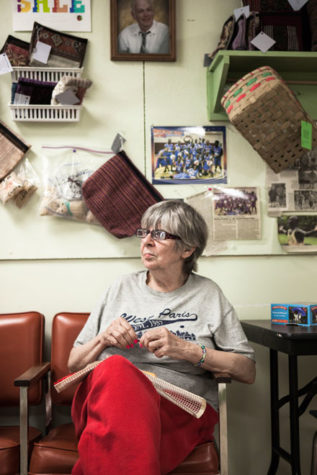 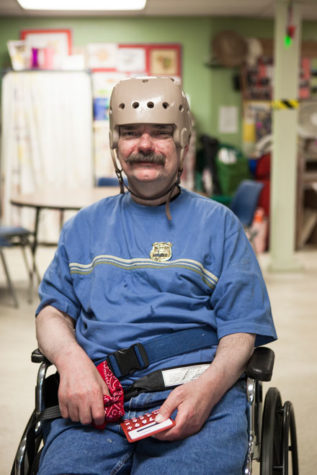 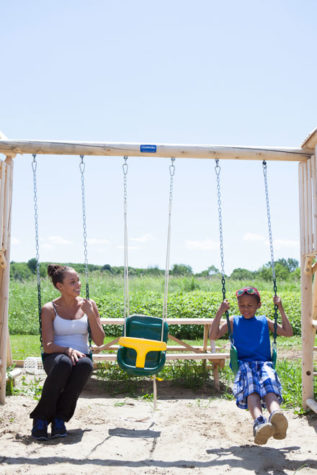 Pop the Cause and Pop for Change: Cellardoor Winery Celebrates Those Who Care

“Back in 2007, I learned that 38 percent of kids in Knox County needed aid every day in order to eat,” explains Bettina Doulton. A former portfolio manager who worked at Fidelity Investments in Boston for 21 years, Doulton had moved to Maine after purchasing Cellardoor Winery in Lincolnville. A hard-driving businesswoman, she had survived breast cancer and was ready for a change. Visiting the midcoast in December 2006, Doulton became intrigued by the 68-acre farm. She vividly remembers her decision to take a chance with this new venture, “I decided to throw everything up against the wall and see what stuck.”

Soon after she acquired Cellardoor, the Rotary Club invited Doulton to give a presentation at the local YMCA. Doulton agreed, and was surprised by what she learned in the subsequent discussion about her new home state. “I realized that there is one degree of separation between doing ok, and being part of the 38 percent of children who aren’t eating properly. Hearing that statistic motivated me to figure out how I could help in my own tiny way.”

Partnering with Lani Stiles from Megunticook Market in Camden, Doulton hosted the first “Pop the Cork” in 2008. A grand celebration of food and wine, with entertainment provided by national acts such as Foreigner, Huey Lewis and the News, and Boyz II Men, the Rockport event became a yearly affair, raising money and awareness for organizations as diverse as Midcoast Habitat for Humanity, the Farnsworth Art Museum, and the Penobscot Bay YMCA. Over time, the size of the party began to detract from its original purpose. “Despite our good intentions,” says Doulton, “the bigness of the event started to matter more than the fact that we were fundraising, and trying to grow the communities of the nonprofits.”

Doulton decided to downsize, transitioning “Pop the Cork,” to “Pop the Cause” in 2014. She hoped to use the clamor for Pop tickets as a means of motivating people to participate in civic activities and become more deeply involved in their communities. This year’s June 26th event, featuring music by the Sultans and the Pointer Sisters, put the emphasis back on area charities. Each of four organizations—United Mid-Coast Charities (UMCC), Coastal Opportunities, Hospitality House, and MCH Meals on Wheels—was designated to receive $20,000. As an added bonus, people were encouraged to vote for their favorite of these organizations online. The organization that received the most votes will get a $100,000 donation.

Four hundred tickets for Pop the Cause went on sale November 1, 2013, at $125 apiece. The event sold out in less than two hours.

Doulton was thrilled. Wondering how she could capitalize on the community’s enthusiasm, she arranged to interview leaders from the charities. She asked what the priorities should be. “They told us: ‘We need to get our message out. We need more people engaged. We need the next generation of volunteers and donors to hear our stories,’” recounts Doulton.

Doulton and her Cellardoor team understand the importance of stories. Located on a 200-year-old farm, Cellardoor has become known for its doormark—a symbol carved onto the barn door by a “hopeful traveler” from the early twentieth century, as an invitation to others to discover what he had found there: “Acceptance, cheer, purpose, belonging, welcome.” This mark resonated with Doulton and has influenced the mission and vision of Cellardoor. Through wine pairings, cooking classes and special events, Cellardoor visitors routinely experience a unique hospitality. Says Doulton, “Cellardoor is a place of safety and hope—and slowing down a little bit to hear somebody’s story.”

Dorothy “Dot” Jameson receives a MCH Meals on Wheels delivery in her kitchen.

The midcoast charitable community has offered safety and hope to its less fortunate citizens for decades. Founded in 1972, United Mid-Coast Charities distributes funds to more than 50 local organizations, including the Wayfinder Schools, Literacy Volunteers, Tanglewood 4-H Camp, and the Red Cross. According to president Rusty Brace, a veteran of the communications field who has held his current position at UMCC for 17 years, the organization raises $1 million every 30 months, and “100% of the proceeds go to charities making a difference in Knox and Waldo counties.”

With 33 percent of the region’s inhabitants on welfare, Brace says, “There is a great need here.”

MCH Meals on Wheels and Coastal Opportunities each receive funds from UMCC. Run by the Methodist Conference, MCH Meals on Wheels distributes more than 125 meals each week to homebound individuals. Executive director Lee Karker says their organization offers more than a simple meal delivery: “Through stopping by and saying hello on a regular basis, people get to know one another. They become like family.”

Coastal Opportunities provides care to more than 100 developmentally disabled individuals at 11 sites. Their offerings include housing and vocational and therapeutic services for people of all ages. In 1975, Congress passed the Individuals with Disabilities Education Act, giving children with disabilities access to a “free appropriate public education.” At the same time that these children were being mainstreamed into public schools, adults with disabilities were being moved from institutional settings back into their communities. Says Coastal Opportunities executive director Joseph Curll, “Initially there was a lot of fear about having our clients as neighbors, but it has been a good transition. People open up and take our folks as friends and participants in the community. They have a lot of value to add.”

A program of the Knox County Housing Coalition, the Hospitality House has also worked diligently to help others understand the value of every human being—and to provide shelter as people get back on their feet. “We are home, help, and hope for our population,” explains Hospitality House executive director Stephanie Primm. “We have a new model of breaking the cycle of homelessness. We wrap the clients in the full and customized program they need to get them out of their situation.” The Hospitality House can provide shelter for up to 21 people—including families with children. Clients also work with case workers, and receive counseling in areas such as employment and interpersonal skills. Housing Coalition chairwoman Anne (Pinny) Beebe-Center acknowledges that this is an important aspect of their work: “We are building a community within the shelter.” She continues, “Volunteers are surprised at the happy, inviting environment of the house. Everyone feels like they belong.”

Stories like these became the mainstay of Cellardoor’s second volunteer-centered June celebration, created after Pop the Cause tickets sold out.  With the help of Cellardoor event coordinator Devon Salisbury, Doulton put out a call to action, drawing upon the words of anthropologist Margaret Mead: “Never doubt that a small group of thoughtful committed citizens can change the world; indeed, it’s the only thing that ever has.” Individuals were asked to give four hours of work to the charity of their choice. Once completed, volunteers would be eligible to attend “Pop for Change,” a June 28th event featuring Belinda Carlisle and DJ Marc Thrasher.

At Hospitality House in Rockport

More than 500 individuals answered Doulton’s call. People delivered meals, painted walls, detailed transport vans, and sorted used clothes. UMCC president Brace was stunned by his experience of the effort, “This spring we had an envelope-stuffing operation in Waldo county—7,000 pieces of mail, tackled by 50 volunteers.” Volunteers routinely stuff envelopes for UMCC, as a way of communicating with potential donors and supporters. It was unusual for UMCC to have so many people available to complete this task. Says Brace, “They completed the job in four-and-a-half hours: a new world record!”

“It has been incredibly rewarding to see people offer up their unique talents,” says Salisbury. “Working on Pop for Change made me aware of how much need we have in our area, and that the organizations are there to meet the need. A lot of people just didn’t know how to help.” Small donations of time and effort enabled organizations to complete tasks that might have otherwise seemed out of reach. They also helped raise awareness. Two members of the Maine Magazine staff assisted in clearing trails for the upcoming summer season at the Tanglewood 4-H Camp in Lincolnville. Says one of the volunteers, “It was fun to spend time helping out an organization I wouldn’t have known about otherwise.”

Doulton has been pleased with the awareness raised by Pop for Change, “It is pretty good if you can get a community trying something new this quickly. We’ve seen this in Maine before—there is usually someone willing to help if you connect the need and the giver.” Doulton remains modest about the results of her innovative efforts. She recognizes that a party that can only be accessed through volunteering is unique, but she believes that her work pales in comparison to the work being done by the charities themselves.

Doulton, who threw her life against the wall eight years ago, continues to be motivated by the stories of individuals who are taking chances in their own way, and helping others as they do. She recalls a text she received from a young woman who had just dropped off food for those who might not otherwise have any. The woman wrote, “Just left Hospitality House. I get it. This matters.”