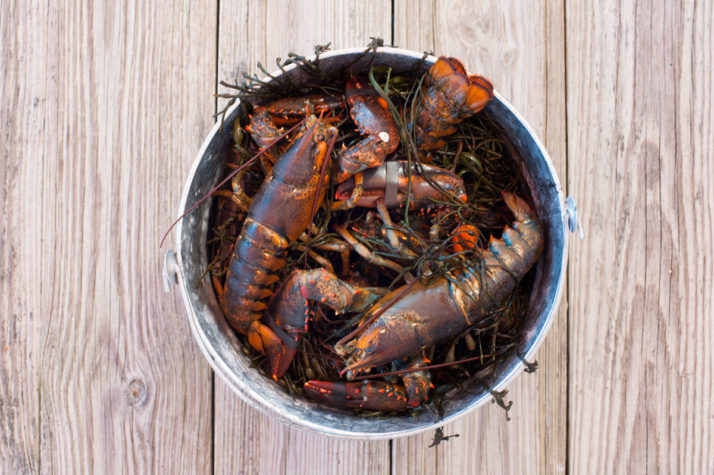 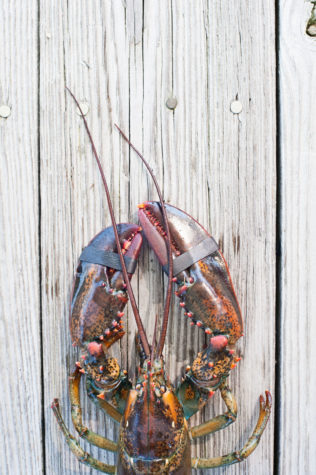 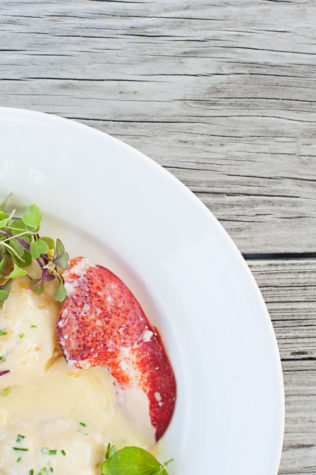 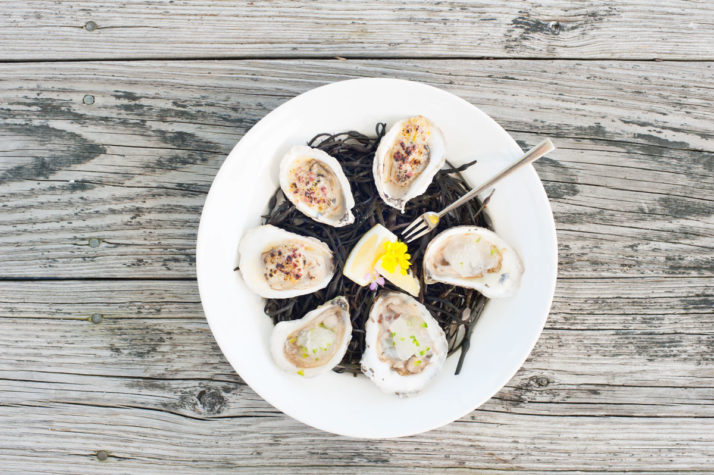 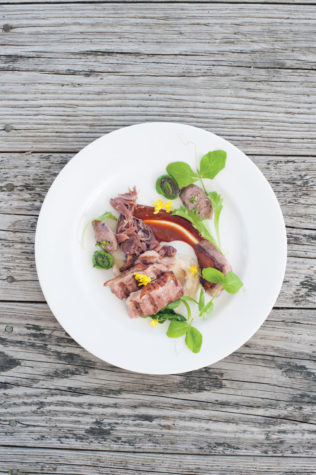 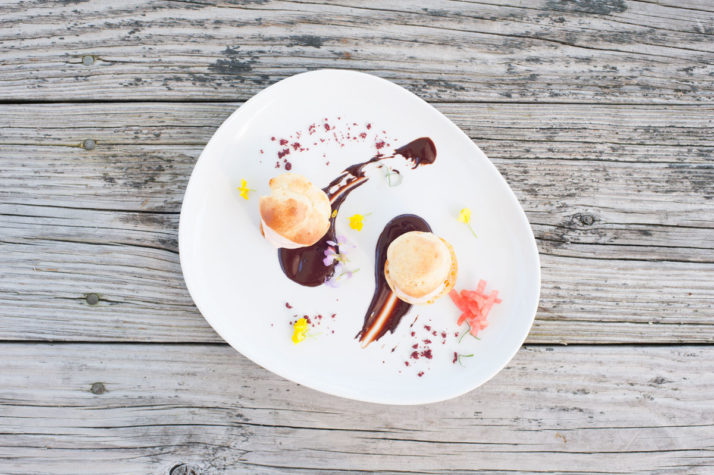 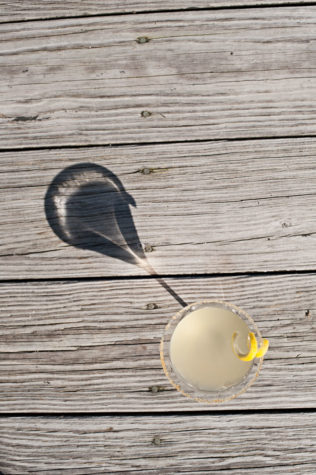 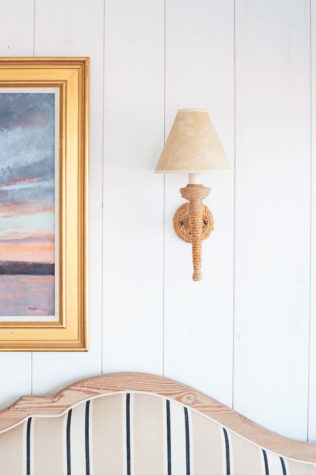 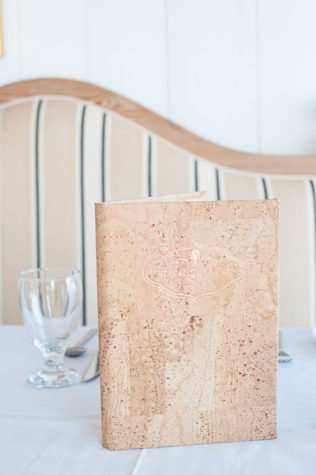 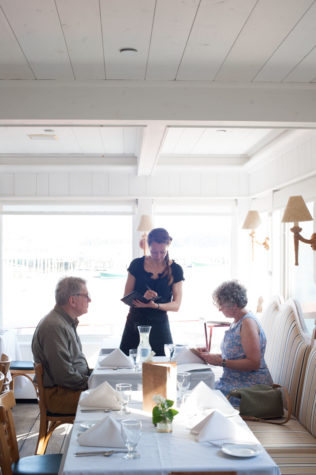 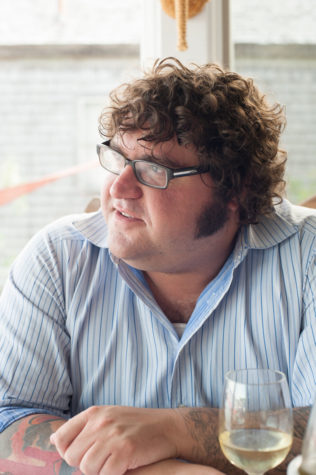 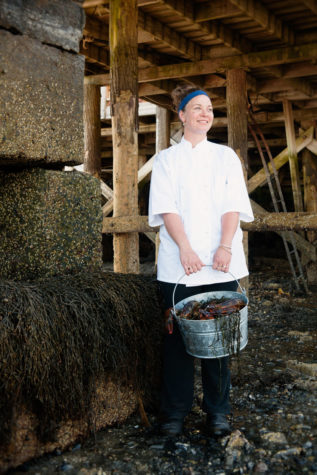 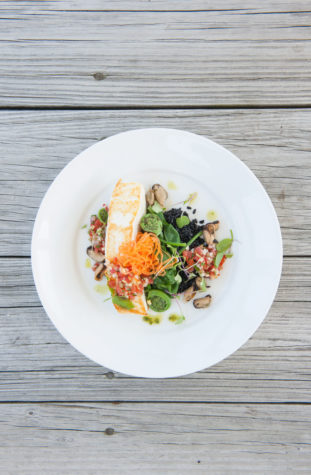 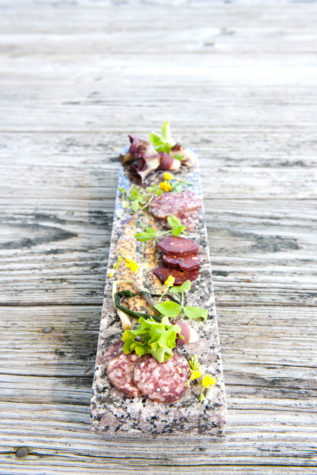 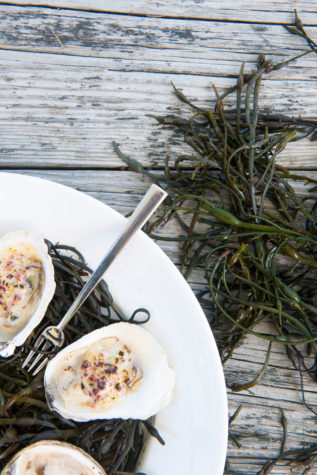 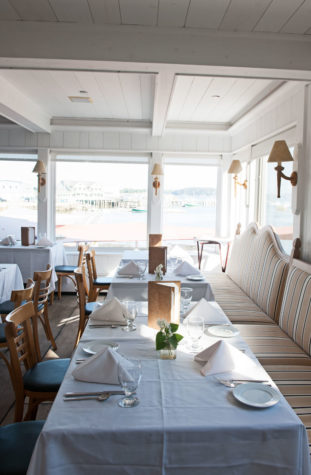 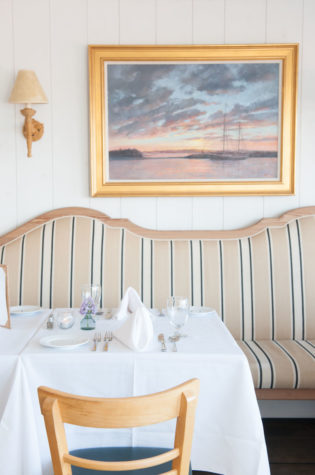 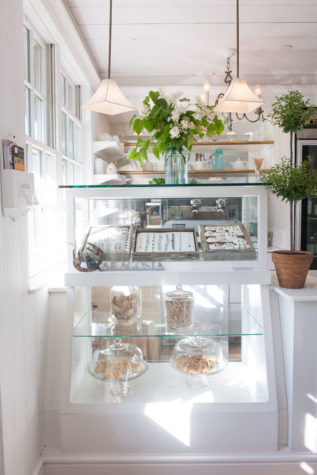 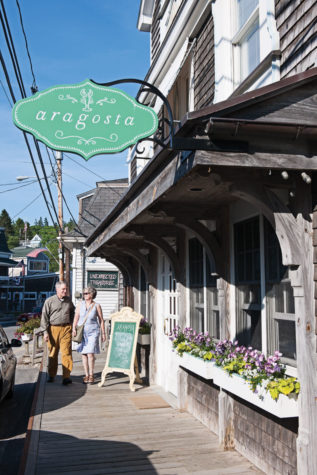 The scenic town of Stonington attracts a wide range of clientele both locally and from abroad. 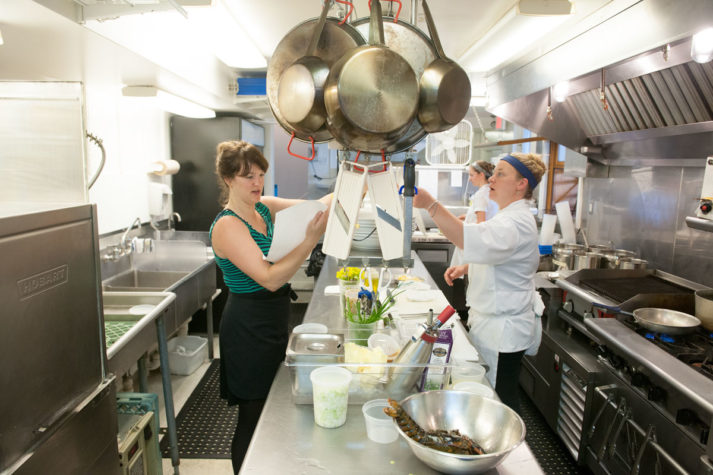 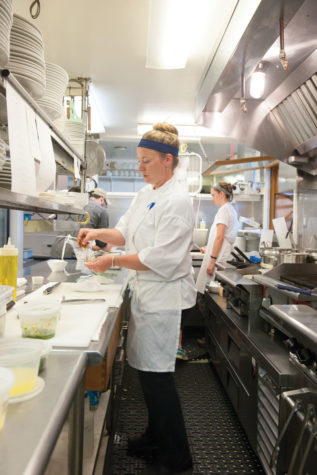 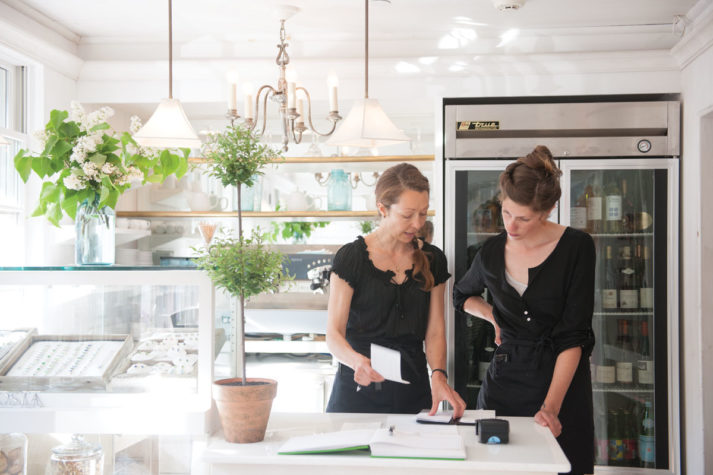 Much of the crew has followed Finigan from restaurant to restaurant. 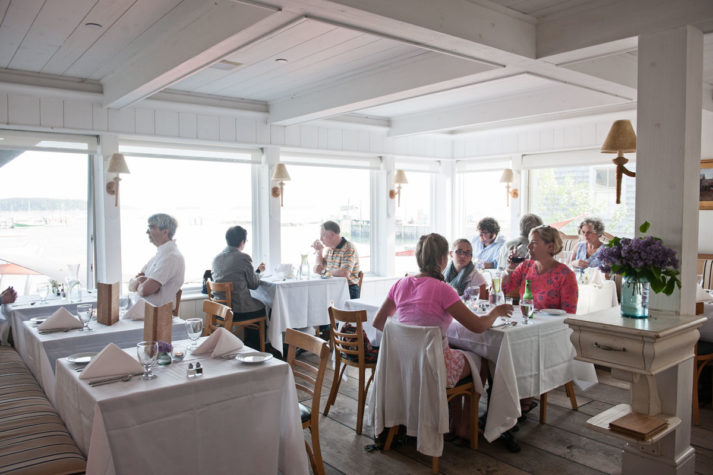 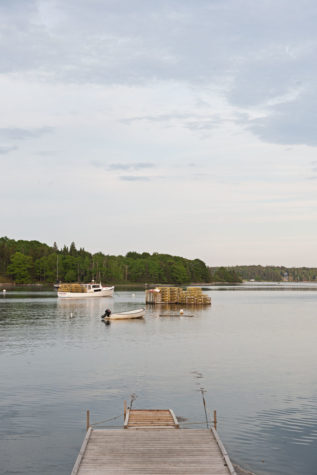 Settled directly alongside the harbor in the small, picturesque fishing town of Stonington, surrounded by numerous tiny farms, you will find Devin Finigan’s restaurant, Aragosta. As I step inside, I am reminded, once again, that the best of what Maine has to offer is often found in some very remote places, in far-flung and hard-to-reach locales that remain completely unfettered, in all their natural beauty.

One of the first effects you will observe upon entry into the dining room is a peculiar wreath made entirely from lobster claws. Finigan explains to me that her husband, Luke Hartmann, salvaged these claws from crustaceans that she picked during the restaurant’s first year of operation, before fashioning them into this odd piece of autobiographical art. Paintings of Stonington done by Finigan’s neighbor adorn the walls, and her best friend designed the restaurant’s logo and sign. As manager Claire Atwater tells me, “Aragosta is not just Devin’s restaurant, Aragosta is Devin.”

A native of Vermont, Finigan grew up cooking alongside her father, who was also a chef, while being schooled in the ways of horticulture by her mother, an avid gardener.

“As a kid, I just assumed that everybody ate farm-fresh eggs, milked their own cows, and made butter and ice cream from scratch,” Finigan says. “How else would you live?”

Although her initial plans took her to college in Savannah, Georgia to study photography, in her early twenties she wound up in Maine, visiting her sister who was taking art classes in Deer Isle. It was here that she met and fell in love with her husband, prompting her to take up permanent residence while securing a kitchen job at the now defunct Bayview Restaurant in Stonington. After a short stint there, she procured a position at the Lookout Inn in Brooklin, where she stayed for six years and was promoted to head chef after three. During this time she began taking annual trips to Italy to study regional techniques that she would apply to her menus.

During her final year at the Lookout, Finigan had the rare opportunity to cook with Chef Thomas Keller, of the French Laundry and Per Se, at a private gala in Stonington. She convinced Keller to let her do a coveted internship at Per Se the following winter, where she would cultivate some of the most important connections of her culinary career. Upon return to Maine, she was approached about taking a position as head chef of the Blue Hill Inn, where she began developing the relationships with farmers and fisherman that allowed her access to superlative product.

The most notable of these was Eliot Coleman’s Four Season Farm, where Finigan buys baby carrots that she swears “taste like candy,” and farm eggs that she “is completely in love with.” It is these eggs that she uses in the pasta for her signature dish of butter-poached lobster ravioli. In the filling, she uses preserved lemon confit to impart a pleasant acidity and brightness that plays nicely with the rich citrus butter sauce. The accompanying greens, from nearby Carding Brook Farm, are impossibly fresh and never an afterthought.

Through her friendship with Eliot Coleman, Finnegan was introduced to another prominent chef, Dan Barber of Blue Hill in New York City and Blue Hill at Stone Barns in the Hudson Valley. Barber took a liking to Finigan, and offered to teach her the art of charcuterie at his restaurants, where she spent the next three years honing her skills in soppressata, chorizo, and bresaola, to name a few. Barber’s carefully laid out philosophy of selecting animals for curing based on genetics, diet, and both the environment and the soil they are raised on was eye-opening for Finigan. It also made her realize that all of these factors were in play for the locally raised animals back in Maine, allowing her to procure the kind of product that would be necessary for producing charcuterie that was up to her now very high standards.

After working with Barber, Finigan returned to Maine in hopes of opening a place of her own, initially to no avail. All of the spaces she looked into fell short of expectations, and after awhile, she began to feel that maybe the timing wasn’t right. She decided to book travel to Spain, to once again study and develop her versatility in the kitchen, this time under chef Macarena de Castro. A few days before her flight, she learned of a vacancy up for long-term rental right on the harbor in Stonington, prompting what Finigan refers to as a “Hail Mary attempt” to get in touch with the owner before she left the country. As fate would have it, the landlord was scheduled to be at Logan Airport in the very same terminal at the same time as she—so they met up and negotiated a deal before catching their respective flights.

A month later she returned from Spain and Aragosta was born in June of 2013. Finigan brought in the same crew she had been working with for years, who happily followed her (even though one server travels over an hour daily). She set to work creating a menu that represents her personality and her travels. She planted a garden right outside the kitchen door, where she makes frequent trips to snip herbs and flowers for dishes like nasturtium tagliatelle with toasted hazelnuts, pickled fiddleheads, and a beautiful, runny soft-poached egg.

As I tuck my fork into lamb dumplings with a velvety reduction of wild mushroom stock, my server, who was formerly employed as a butcher in Brooklyn, explains to me that the frisee in the dish comes from her own personal farm, called Five Pounds of Dirt. When I inquire about the name she tells me, “They say you aren’t truly a farmer until you’ve ingested at least five pounds of dirt.”

The thoughtfully compiled wine list is a collaboration between Finigan and Atwater. It runs the gamut stylistically, and offers a few gems like Wiener Gemischter Satz Sieveringer Ringelspiel, a dry, refreshing field blend that can be quite hard to find. Wines like these with such pronounced minerality pair brilliantly with Finigan’s trio of oyster preparations, starting with Taunton Bays topped with a cold, spicy jalapeno granita. The second entry in the oyster tray are grilled North Havens suspended in a rich fennel butter, finishing with baked Bagaduce oysters with leeks and Finigan’s own soppressata.

Despite its northern location, Aragosta has every single element in place to be a great restaurant—a working harbor at its back door, farms dotting the landscape in the other direction, a loyal base of locals who dine alongside the influx of tourists in the summer. Finigan is constantly being inspired, changing the menu weekly or on a whim, and as she tells me, Stonington is the best possible place to showcase the best of Maine ingredients.

As I watch the sunset over the bay from my table, I’ve got to agree.