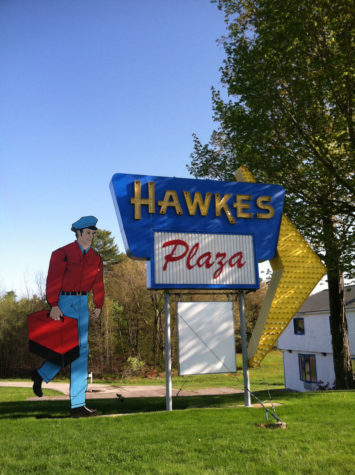 If you’ve driven down Route 302, you’ve probably seen him, with his blue suitcase and his faded red work shirt. You might remember when the larger-than-life repairman appeared to stroll along the highway, animated by over 300 light bulbs blinking on and off in time. And if you’ve lived in Westbrook for long enough, you might have visited Al Hawkes’s television repair service—or perhaps you’ve simply heard of Hawkes. He is a legendary musician and producer, after all.

Erected in 1962 as an advertisement for his television-repair business, the iconic sign was restored and repainted in 2000. Now, zoning laws have rendered the serviceman motionless. Nevertheless, interest in Hawkes’s career has never wavered, as he continues to play a pivotal role in both the national and local music scenes. Recognized by the International Bluegrass Music Museum as one of the pioneers of bluegrass and immortalized in a recent documentary, Hawkes is often referred to as “the Walking Man,” because that old wooden sign? That’s Al.