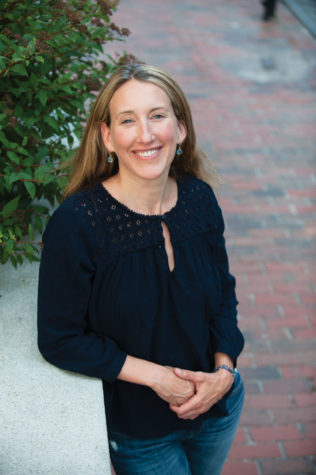 Genevieve Morgan is the author of Undecided: Navigating Life and Learning AfterHigh School. A senior editor with Islandport Press, Morgan lives in Portland with her husband and two sons. She is the former co-host of the Dr. Lisa Radio Hour and Podcast.

Why was Undecided an important book for you to write?

I have two children in high school. There has been a lot of conversation in our household about whether college is the right choice immediately after graduation. If you’re going to try and pay the full amount for college, it can cause extreme hardship. If you can’t afford to pay the full amount, your kids end up with debt after they come out of college, unless they can get scholarships. It’s a much more difficult decision now. While writing Undecided, I learned that there are many options for kids. College is one of them.

You’ve been a writer, an editor, and a producer; you’ve lived in different parts of the country and you’ve written for different publications. Would you say that you’re a bit of a free spirit yourself?

When I was 17, I really wanted to be an actress, but I was good at school and there was an expectation that I would go to college. At the time, I was going out with a guy who played in a rock band. I wanted to move to Hoboken, live with him and go on auditions. My parents were thrown into spasms of anxiety over this. I got into Bowdoin College, which is one of the reasons I’m now in Maine. I remember I spent half an hour in front of the post office with my matriculation card, thinking “Do I send it in? Do I not send it in?” I was the epitome of undecided. I eventually sent it in. The boyfriend dumped me, and luckily I had a place to go. Bowdoin turned out to be a great thing. I was able to continue acting. I won the theater chair at Bowdoin, then I went out to California to become an actress. When I got to California, I realized I wasn’t going to make any money being an actress and got a job fact-checking at a magazine. As the tides of life happened, I started to write more. It was never a conscious choice. People are lucky if they have a passion and they can say, “This is what I really want to do.” I admire those people. I’m not one of them.

Is it OK for kids to be uncertain?

Being undecided is the state of being human. I remember my dad used to say, “Being an adult means that you’re about 70 percent sure you’ve made the right decision.” Many of us get into our 40s and we realize we’ve been living somebody else’s life. We thought we knew what we wanted to do, but we didn’t have the maturity or the insight to understand that we were actually working with somebody else’s script. I think that’s one reason for midlife crises. What I want to get across to kids is that there are ways to cobble an experience together that may lead to a crazy, bright, shiny future. Don’t be afraid to take the road less traveled. There are other maps.

How can a high school graduate experiment with taking the road less traveled?

I make a big case for volunteering after high school, either abroad or in your own community. There’s a lot of need in the world. If you agree to donate your labor, what you get in exchange is education and a lot of responsibility. That can often lead to paid work. Volunteering is a great way to blow the roof off your life. Plus, colleges love gap years. The dean of admissions at Middlebury ran a study a few years ago and found that the kids coming back from a gap year had an average of a one to one-and-a-half point rise in their GPA compared to traditional freshmen. Colleges like mature kids.

Your latest book is The Fog of Forgetting, which is not like Undecided, or any other books that you have written.

No. It’s my first work of fiction, and a young adult book. In a funny way, it does relate to Undecided because it is about finding the landscape of your heart—although The Fog of Forgetting has a lot more action and swordplay. It’s a great book. I’m so excited to have it out there.