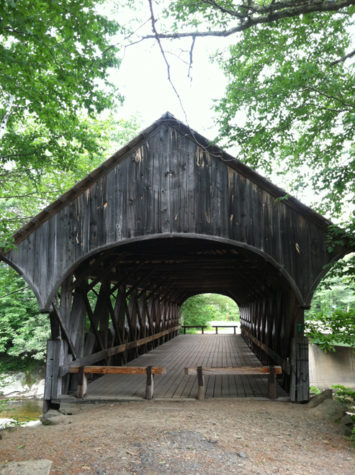 While many of our modern bridges are architectural marvels of steel and sky, there is an undeniable charm to the traditional covered bridges of New England. In Newry stands a striking example of a Paddleford truss bridge, a design created by a man named Peter Paddleford of Littleton, New Hampshire. Constructed in 1872, the 87-foot-long bridge spans Sunday River, which flows from the Mahoosuc Range and joins with the Androscoggin downstream. Weathered by the elements, the bridge lasted nearly a century before being retired. Now, traffic flows alongside on Route 2, but the bridge remains a popular tourist destination (and occasional wedding venue). Thanks to its bucolic setting and antiquated engineering, this bridge has become the subject of many works of art. According to popular folklore, this is the most painted (and photographed) bridge in all of Maine, hence its unofficial name: The Artist’s Bridge.