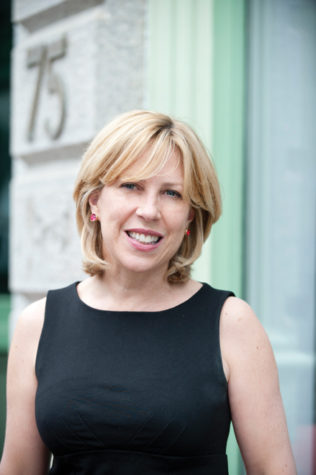 Christina Baker Kline is the author of the No. 1 New York Times best-selling novel Orphan Train. Kline lives with her family in Montclair, New Jersey, and spends summers on Mount Desert Island.

What were the orphan trains?

The orphan trains are an incredible piece of American history. Two hundred and fifty thousand children were sent from the East Coast to the Midwest over 75 years, from 1854 to 1929. It was the largest migration of children in our nation’s history, and very few people know about it. This was a labor program for children between the ages of two and 14 years old, who were taken out of orphanages and put on trains to the Midwest, specifically indentured to work for farmers, factory owners, and other people. There was no screening process: children were given to whomever showed up. The children had to line up by height and stand on platforms while people tested their muscles, and their teeth, and made them run in place. In some ways it resembled a slave auction. The children aged out at 18, but until then they were the property of the people who took them. It’s a chilling and surprising part of our past.

Some of these children weren’t orphans at all—where did they come from?

The term “orphan train” is a misnomer. Only about 30 percent of the children were orphans. The rest were abandoned, taken out of their homes, or were runaways. Some were actually plucked off the streets. Poor parents would caution their children not to go out after dark, because they might be picked up by the police, put into an orphanage, and then taken on a train. The children were told that their lives began when they got onto the train. They were often given new names; their birth certificates were altered, destroyed, or locked up. Parents would show up on a train station platform to take their children back, but they were turned away. Once a decision was made by an orphanage to put a child on the train, there was no going back.

Many of these children were quite young and were put to work doing physical labor. Was this typical of that era?

In the 1850s, when this started, children were treated like property. Poor children worked, whether it was on a farm or in New York City. The orphan train was originally a humanitarian concept. The man who came up with this was a Methodist minister named Charles Loring Brace, who wanted to get children off the streets. There were no child-labor laws, no child-welfare laws, no protection for the poor, no safety net, and no social programs of any kind. It was a brutal situation for many, many children—especially immigrants. These children were dying of disease, starvation, and exposure; they were going to prison, becoming prostitutes, and joining gangs. There were 30,000 children living on the streets of New York. Brace thought, “Let’s get the children onto bucolic farms with sheep dotting the meadow, and big red barns, and wrap-around porches on white farmhouses.” He had an idealized view of what it would be like for them. Even though we might now consider the orphan trains a barbaric idea, most of the train riders eventually found their footing, and the vast majority stayed in the small communities that they landed in.

You’ve written many other books. How has the success of Orphan Train impacted you personally?

It’s great to be a writer. It’s not like being a supermodel, where you have a shelf life. I can write until I’m a hundred, and I hope to. Part of the joy with Orphan Train is that if this had happened to me at the beginning of my career, I would have had no idea what it was like to persevere when I wasn’t sure what was going to happen. Now I feel I have a lot to share about my own experience, and that is something you gain with age.