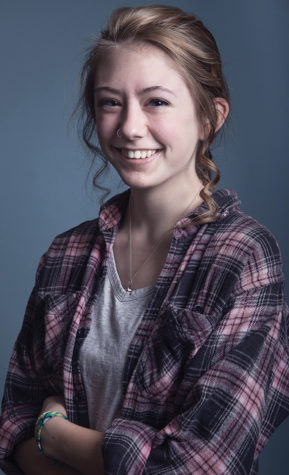 Hunter Kent is a senior at Cape Elizabeth High School and a member of the Natural Helpers program. She recently spoke at TEDxDirigo Youth at her school about her personal experience with overcoming depression. Her classmates gave her a standing ovation.

When did you know that depression might be an issue for you?
Middle school was an adventure, definitely. For any middle-schooler, it’s like a roller coaster. You’re going through all these changes; you’re getting more responsibilities and work and projects and homework. There’s a lot more social pressure. On top of that, I was dealing with different family issues. I have a brother who has autism. I was very quiet and I was shy. I isolated myself from everyone. In eighth grade, that’s when I really felt outcasted, and when my depression started.

How did things change in high school?
As a freshman, I really didn’t fit in. I had a couple of friends, but I felt like I didn’t belong there. It was hard for me. Sophomore year was pretty bad too. Honestly, I didn’t like a lot of my classmates and I didn’t like going to school. I came back to school my junior year with a more open mind and a more positive attitude. This year has been amazing. I’m making a bunch of new friends and doing things that I never thought I would be able to do. My perspective on school has definitely changed.

Did people realize you were dealing with depression?
I think some people did know. I’m a very emotional person, and I’ve always been pretty open about it. Sometimes you can’t tell if a person is struggling with mental illness. I have heard stories from kids in my school who have struggled with depression, and I never would have expected those people to be going through it. You can’t judge people based on what they look like, or how they act, because you really don’t know.

When people see that somebody is having a problem, sometimes they want to solve that problem for them. That’s not always the answer, is it?
I’m a part of the Natural Helpers program at my school. This is a group of students people can go to if they’re experiencing stress or a more intense problem. Our training emphasizes not necessarily being the hero or jumping in to save people; simply being there to listen can be really important. Talking to people has been one of the best things for me. It’s been the thing that’s probably helped me the most. I definitely had support from a lot of my friends and my school social worker. I’m really close to her. She’s helped me so much with all of that.

Depression is very personal. Yet you were willing to get up on stage and tell your classmates all about your experience—and you got a standing ovation?
I did. There is a stigma associated with mental illness. People feel uncomfortable with it. They don’t want to talk about whether they’re struggling with it or not. For those who aren’t struggling with it, they don’t understand. It’s a hard thing, but I feel like it’s something that we have to talk about. Especially people like me who are on the other side, who have overcome it, because people who are currently struggling with depression feel like they’re not going to get better. I think it’s really important that people speak up and say, “Hey, you can overcome this. It really is possible.”