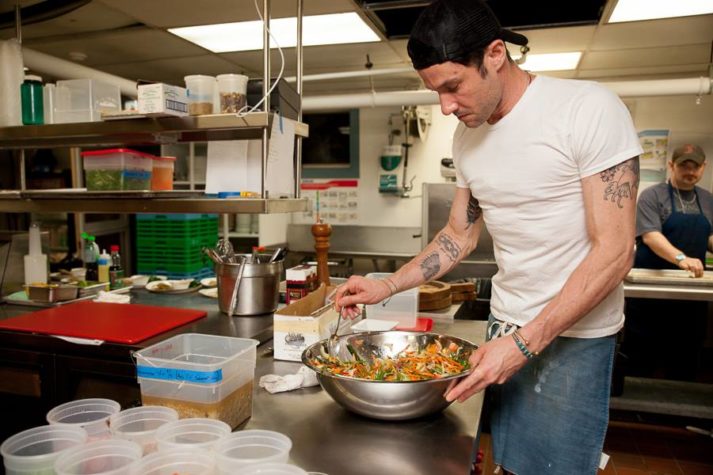 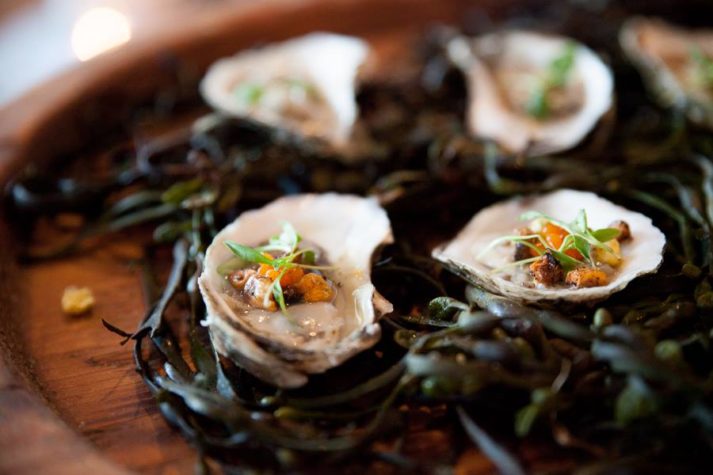 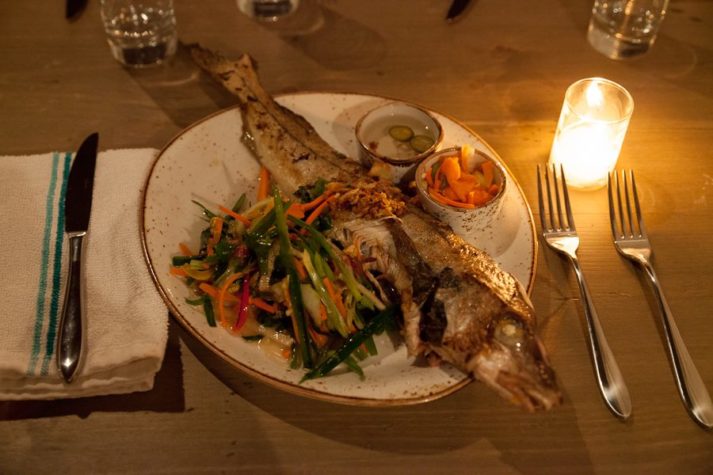 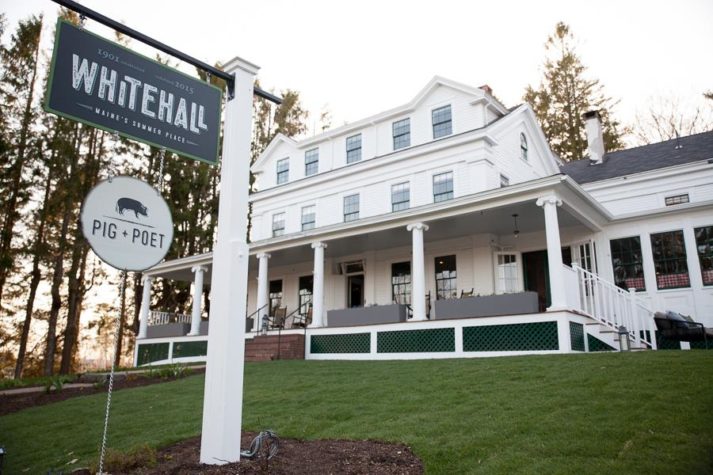 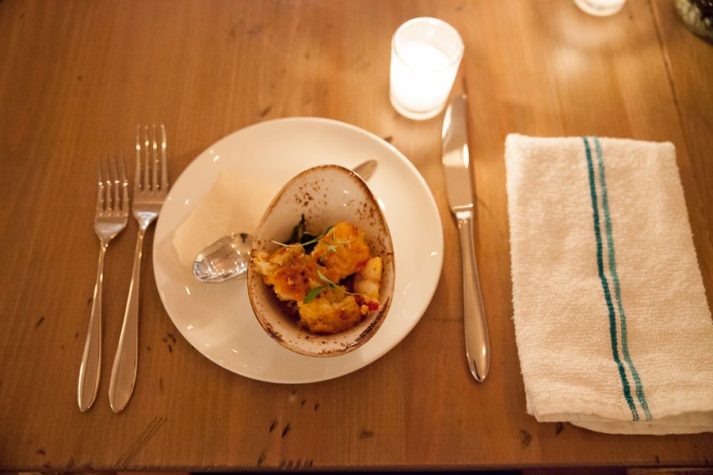 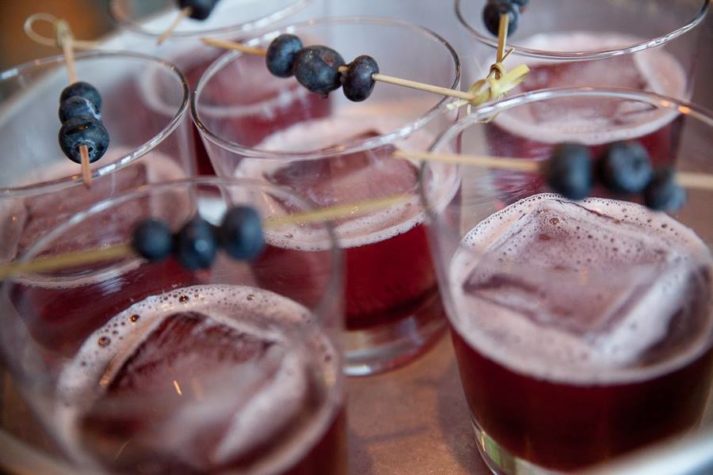 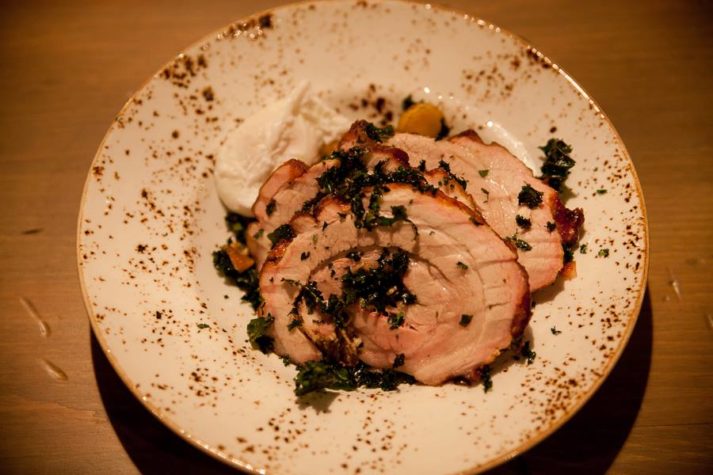 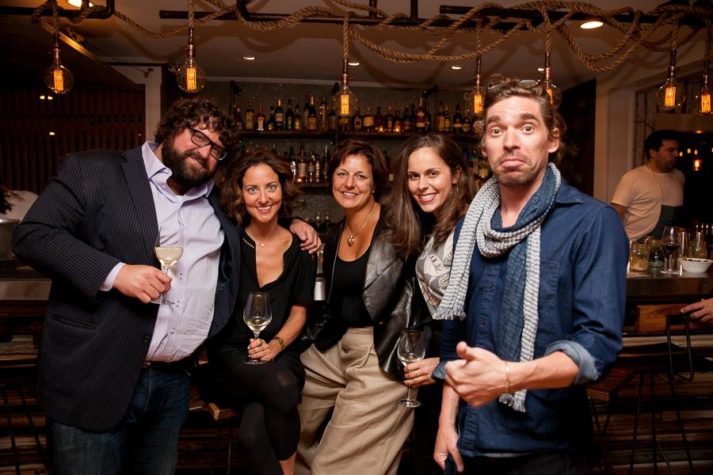 Friends and Family night at Pig+Poet

As the busy tourist season looms on the horizon, the newly renovated Whitehall Inn in Camden is the home of one the year’s most anticipated restaurant openings, Pig+Poet. Though I began hearing rumblings of a very ambitions project being undertaken by the boutique group, Lark Hotels quite awhile ago, I was finally able to see the (almost) finished product a few days ago at their opening party for friends and family.

The first thing one notices, in addition to the new signage, is the spacious outdoor seating amidst the flower gardens on their well-manicured lawn, situated around a modern-style fire pit that is enticing, even though the weather is quite balmy for May. The lobby is expansive, a collection of rooms dotted with contemporary, brightly colored furnishings that both contrast the classic feel of the inn and seamlessly integrate into the dining room area of Pig+Poet. What Im told will be a constantly rotating collection of local artwork, including work by Art Collector Maine artists, on the walls is accentuated by thought-provoking network of light fixtures by Inspired Wire Studio, most notably the string of bulbs attached to heavy cords of rope, imparting a feel not unlike the deck of a pirate ship.

The restaurant itself is headed up by Executive Chef Sam Talbot, well-known for both his appearance on season 2 of Bravos Top Chef as well as his major contributions in regards to educating the dining public on the art of eating well while living with diabetes, he himself being diabetic. Most of Talbots culinary background finds roots in Charlestown and New York City, an interesting contrast to the small, seasonal town of Camden.

With him Talbot brings an experienced crew in both the front and back of the house, which becomes evident upon witnessing the effortless nature of service, even this early on in the game. While the crowd fills up on wine and Pemaquid oysters, the stage is set for the inaugural meal at Pig+Poet.

Talbot gives a brief speech beforehand, expressing his excitement to have landed at the Whitehall Inn while giving a brief synopsis of the first dish we would enjoy upon being seated, clam ceviche. As with each course, the ceviche, accentuated with turmeric and ginger and served atop rice crackers with sautéed bok choy on the side, showcases a very clean and focused flavor profile. Another dish, ramekins of crumbled buttermilk biscuits with fresh lobster meat and honeycomb, serves to establish a solid base, along with cast-iron skillets of thick cornbread, flecked with whole corn kernels.

Dinner is served family-style, and my glass of Gruner Veltliner is refilled often as the procession of dishes unfolds at a relaxed pace. I will admit that I have, in all my years spent in Maine, never seen a whole haddock served in a restaurant, but Talbot combines familiar elements, such as a dusting of crumbled bread crumbs, with a refreshing mix of julienned vegetables nuanced with the flavors of Vietnamese cuisine that allows the flavors of the mild fish to still shine through.

A simple salad of faro, beets, and mint yogurt acts as a palate cleanser of sorts before a heavier course of slowly roasted porchetta with impeccably cooked eggs and Talbots own fiery hot sauce (the perfect accompaniment for the remaining cornbread on the table). The texture of the pork is beautiful, with sweet, crispy fat that gets even better when enveloped in rich egg yolk.

Talbot reappears shortly before the dessert courses of both trifle cups and warm crisp, checking in to assure that everyone is having a proper time. Afterwards, we all unwind over a glass of Irish whiskey before I retire to my room, the trappings of which are similar to the rest of the hotel, while retaining its rustic charm.

Even more so than opening night, the friends and family party at a restaurant is the epitome of a practice run, though in this case the composure exuded by the staff would suggest otherwise. I very much look forward to reserving a table after giving Pig+Poet a bit of time to get settled in and hit their stride, which by the looks of things now shouldnt take long at all.