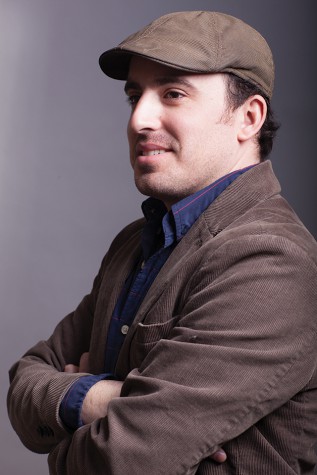 I come from a musical family. My parents used to sing at different events, like Christmas Eve mass or a friend’s party. My brother was also a big influence—he was nine years older than me. He played music and went to Berklee. My uncle is a guitar player who went to Berklee back in the 70s. I’m the youngest of five kids and everyone took piano lessons. I took piano lessons when I was eight and got into the drums when I was ten. I followed in my brother’s footsteps when I was about 12 with guitar. I always had the music bug.

How did your parents feel about having a drummer in the house?

To have a drummer as a child, you have to have a room for the drums. We had the third floor and my dad soundproofed that baby. You could still hear it, but at least it was a place for me to go and not be in people’s faces when I was banging on the cymbals and making loud noises. My parents have always been supportive of me as a musician. Not every kid wants to hang out with their parents, but I play in a band with them and with my brother. We have always had a really close relationship. It’s fun to be able to sing, harmonize, and play music with your parents.

You moved here from Massachusetts in 2013, so that your fiancée, Kelly Clinton, could take a job with Maine magazine. What has it been like to build a new life in Portland?

It was both frightening and exciting at the same time. Kelly and I have always talked about trying to live somewhere else. Kelly is the adventurous type. I’m more practical. She gets me out of my shell, which is great. I had been teaching and performing, and I had a pretty extensive network of students and gigs in Massachusetts. Coming to a new place was scary for me because I had to basically start over. Kelly was starting her career, and since she has supported me in doing my thing, I definitely support her doing hers. We’re young, and it’s a chance for us to meet new people and experience a new place. That can only be good for a songwriter. It’s been an adventure. We’re settling into Maine. Portland has exceeded my expectations. I had been to Portland one time before moving here, and that was for a Mumford and Sons concert on the Eastern Promenade. I literally came here and went to the Eastern Promenade and then left. I really didn’t even know that the rest of it existed. Getting to live here has been a joy for me.

You’re going to be playing at the Kennebunkport Festival on June 8?

This year, I’m playing at the opening party on Monday. I got to experience the Kennebunkport Festival for the first time last year, and it was really cool. The festival supports artists, chefs, musicians—all that Maine has to offer. And Kennebunkport is so beautiful, peaceful, and serene. The boats and the harbor made me feel right at home.