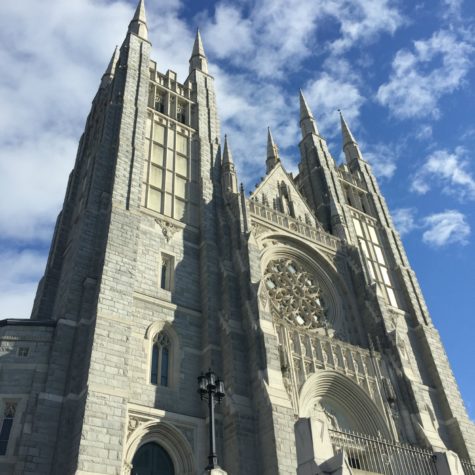 Basilica of Saints Peter and Paul

The Basilica of Saints Peter and Paul in Lewiston, Maine, is one of the largest churches in New England. The turrets of the massive stone, Gothic-style structure jut towards the sky. The church was built out of need when in the late-nineteenth and early-twentieth centuries many devout Roman Catholic French Canadians immigrated south to work in the mills of Maine. When many settled in Lewiston in 1857, the diocese of Portland sent a French-speaking priest north to host mass in the basement of a local church. As more Canadians moved to the area, the congregation outgrew the space. In 1905 with 10,000 people attending mass, the church began plans for a new, larger edifice. The basement was finished in 1906 and has had several additions over the years. In 1933 the upper church was finished and the sanctuary was dedicated to Saints Peter and Paul.

Inside, beneath one of the intricately detailed, stained glass windows, is the organ created by Casavant Frères. Because French Canadians felt music to be an integral part of their worship, they wanted a high-quality instrument. Casavant Frères built one of the largest organs in the state that filled the new church with music. In 1983, the basilica was added to the National Register of Historic Places. Reverend Francois Drouin, pastor from 1940 to 1952, wrote, “The people and their clergy were making plans and saying: let us build a temple of such beauty and serene majesty that the generations to come will look upon it as an impossible dream come true in the modest city of Lewiston, Maine.”