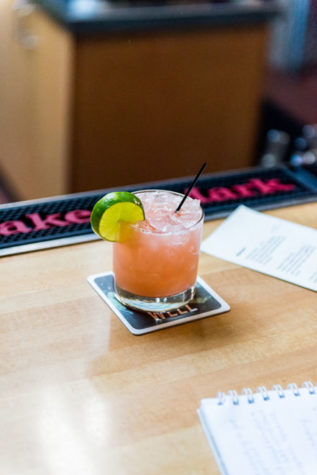 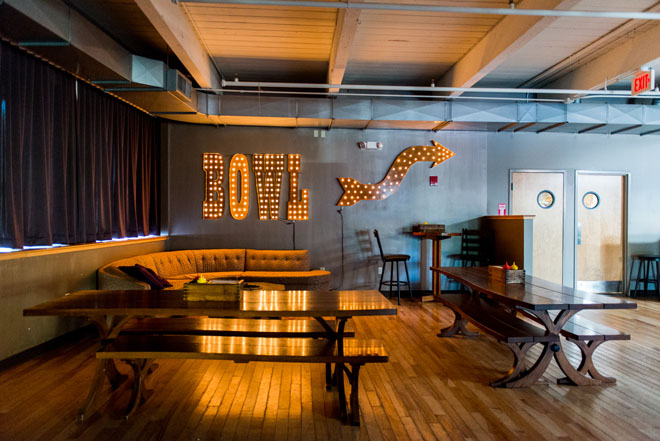 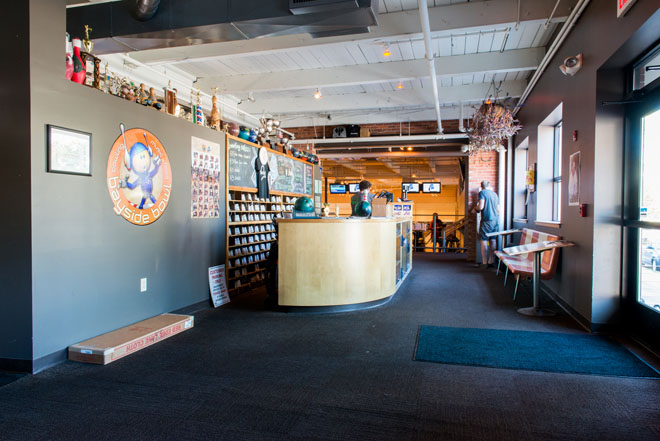 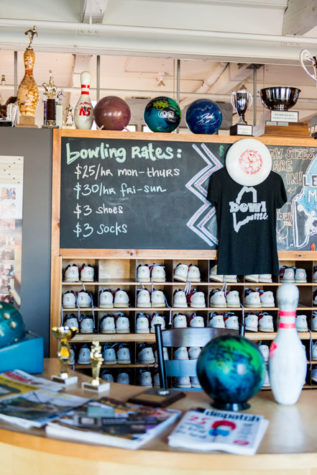 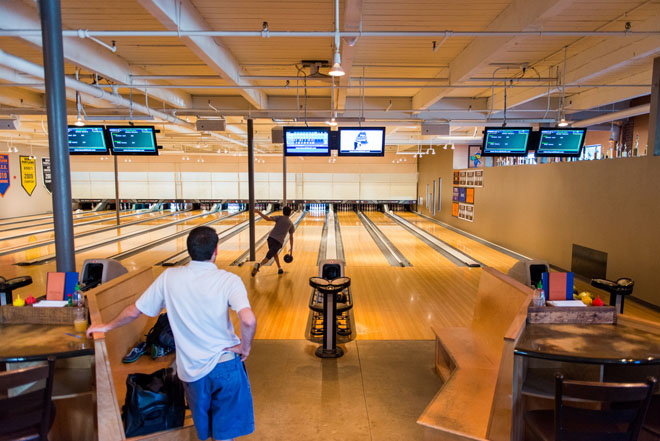 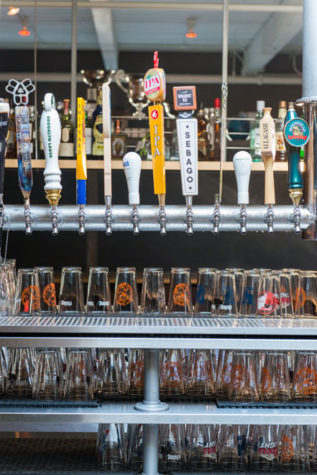 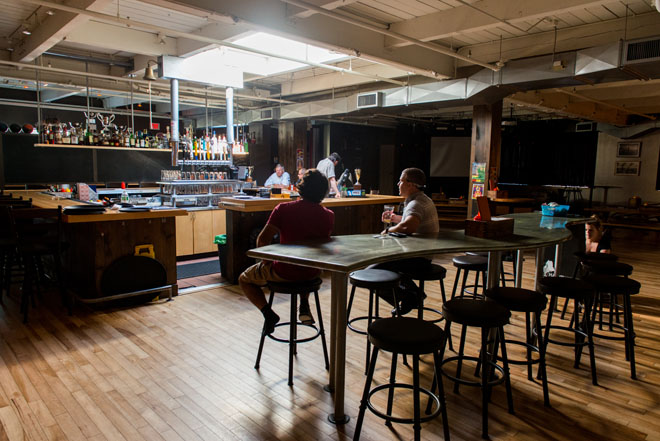 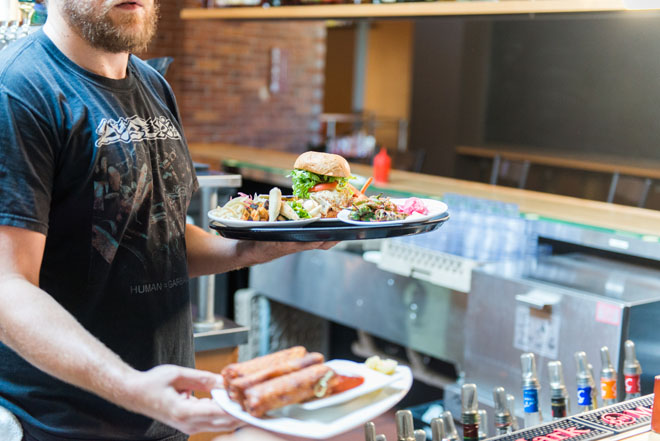 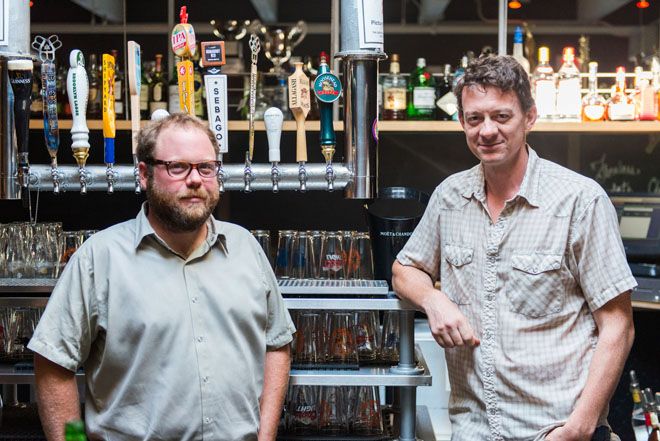 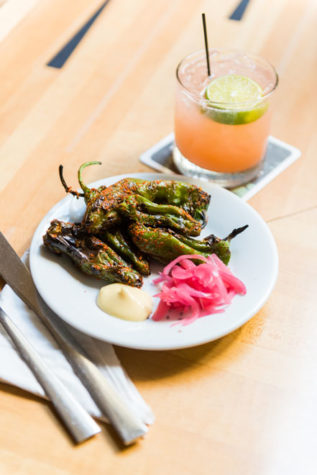 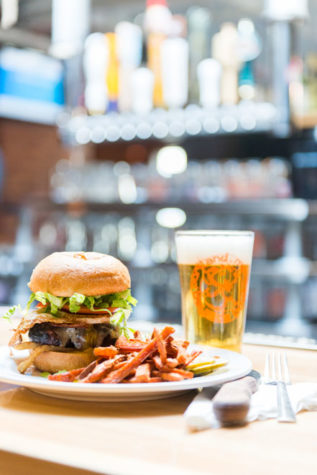 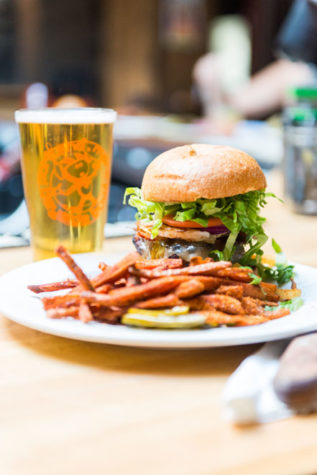 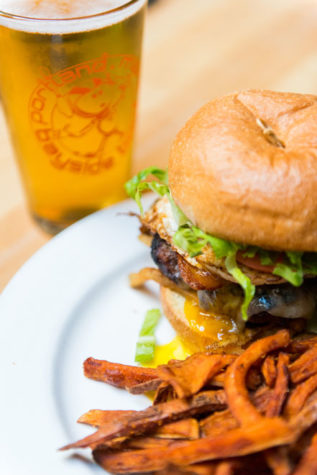 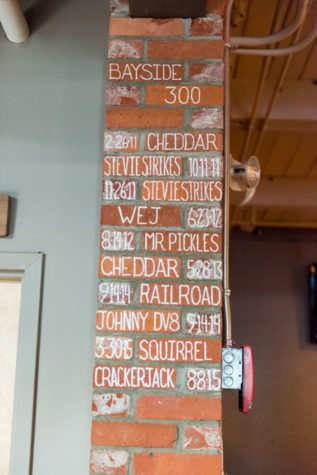 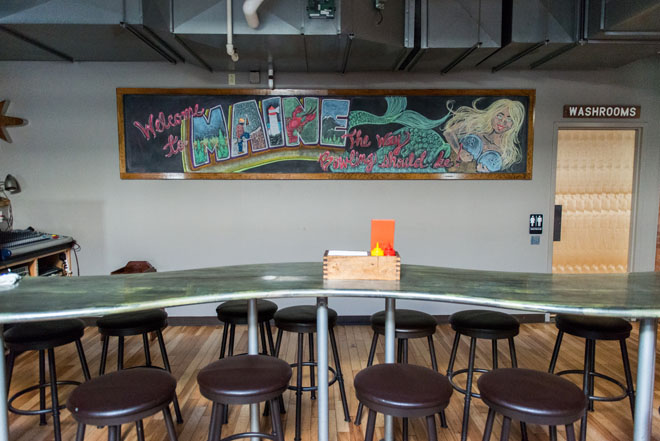 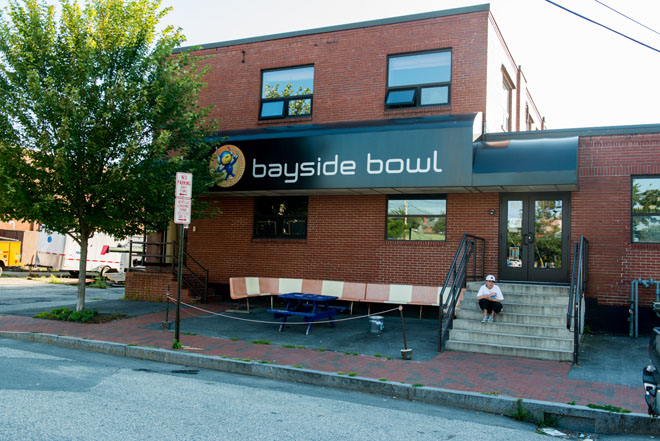 There are many, many fun things to do in Maine in the summer. Maybe bowling does not instantly come to mind. “Summer is the quiet season at Bayside Bowl,” says owner Charlie Mitchell. “We’re on the opposite schedule of most Maine restaurants.”

Which makes summer a really good time to up your bowling game and get ready for fall league play. Close to 100 bowling teams come through Bayside Bowl every week during the busy season—October through April. There’s the Restaurant and Brewers League that plays on Sundays. Tuesdays and Thursdays might bring in local business leagues, media leagues, and any others who want to join the fun. It’s competitive, but Mitchell has devised a scoring system that levels the playing field. After all, everyone wants a shot at having their name on a championship banner hung near the lanes.

When I arrive on a sunny afternoon, Charlie Mitchell is tending bar. Bowlers take up a few of the lanes, while vintage Rolling Stones plays on the speakers. In Mitchell’s previous life, he worked as a lobbyist for the Maine community college system. And he bowled. Eventually he decided he’d had enough of the legislative life in Augusta. “I was just running the league, looking for a social outlet and a way to bring people together,” he says. He’s never looked back.

Bayside Bowl is so much more than bowling. For one thing, they have an actual chef in the kitchen. Jared Radding, who previously cooked at the Frog and Turtle in Westbrook, has created a menu that reaches far beyond what you would typically find in such a venue. Yes, of course, there are burgers. You can get a classic, but live a little and order the Drunk on Lane 9, which is topped with bacon, a fried egg, red onion, and cheddar cheese and underneath it all is a crispy layer of fries. My companion nods his head in approval, but can’t speak because his mouth is full of this deliciousness. The hand cut sweet potato fries served on the side are seasoned with a sweet-and-spicy mixture of cinnamon and chipotle pepper. You’ll find some surprising items on the snack menu too. Barbecue pork “cigars” are deep-fried egg rolls filled with slow-braised pork and cheddar. They hit all the right notes for a snack food—crispy, chewy, salty. A special plate of pickled vegetables, all made in-house, is a perfect foil to the fried food. The sharp tang of pickled beets, black radishes, and Tokyo turnips is refreshing and clean. Another special is a dish of grilled shishito peppers sprinkled with togarashi, a Japanese spice blend. There’s a cooling kewpie mayo for dipping. A variety of sandwiches, including lobster grilled cheese, burritos, and, of course, pizza, are all available. A Rachael sandwich made with tempeh and a veggie burger are just two of the several choices available for vegetarians and vegans. Charlie Mitchell especially likes the vegetarian chili.

As we enjoy the food at the bar, Mitchell mixes up a Siesta for us. The cocktail is a smooth blend of 1800 tequila, Campari, freshly squeezed lime juice, grapefruit juice, and simple syrup. There are several other creative cocktails, including one called the Karl Hungus. When I ask Mitchell where the name came from, he laughs and explains, “that’s my bowling name. Everyone here, staff and customers, has a bowling name.” If cocktails don’t suit your bowling style, there’s a good list of local beers and, of course, you can always get a PBR.

Bayside Bowl plays hosts to many other types of events. Wednesday nights you can see a movie out on the patio (or indoors if it’s raining). Saturdays often bring live local bands. Shows are free and open to all ages. Mitchell is particularly excited about the music line-up this fall, which he describes as “a crazy variety.”

Last spring, the Professional Bowlers Association visited Maine for the first time and held two competitions at Bayside Bowl. It was televised on ESPN and drew a big and uncharacteristically rowdy crowd of spectators. The professional bowlers loved it, and Mitchell has attracted lots of new customers who saw the event on television. Bayside Bowl has also been the site for several wedding receptions and December is filled with private parties and special events. “We do things pretty differently than any other bowling alley,” says Mitchell.

I’m looking forward to coming back to bowl a few frames, sip a dark and stormy, and try the Bayside Nachos. Until then, I’m working at coming up with my bowling name.