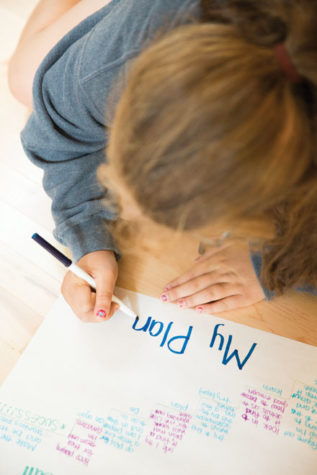 An important part of each camp day is Julia Time, where life skills such as goal setting are discussed. 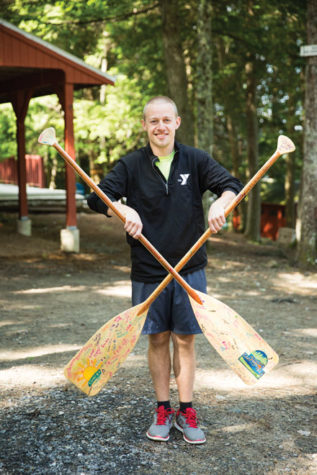 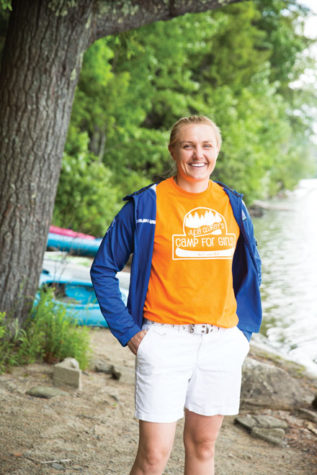 Julia Clukey first recognized the importance of summer camp through her own experience at Tanglewood 4-H Camp in Lincolnville. 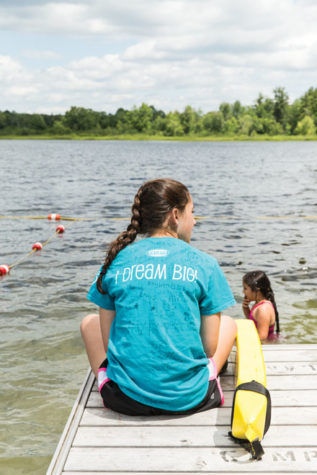 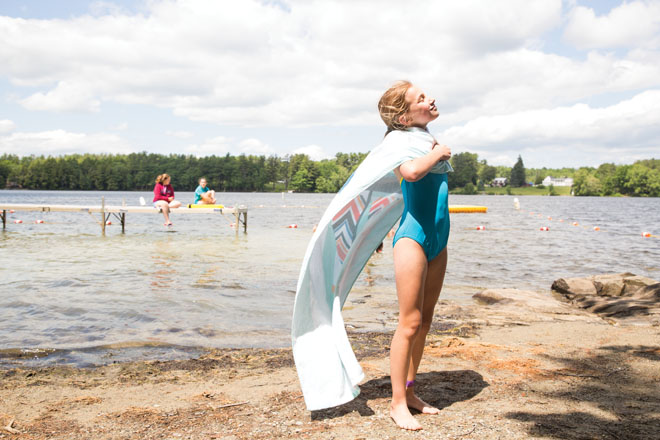 Corinne Vasvery basks in the June sunlight by Maranacook Lake. 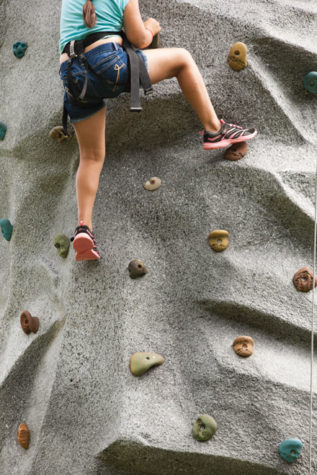 A camper takes on the rock-climbing wall. 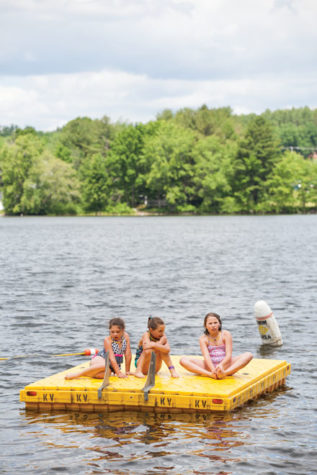 Gabby Hamlin, Izzy L'Italien, and Kaleigh Kubecki take a break on the dock.

“Why is it good to think about our goals?” asks Olympic luge rider Julia Clukey. Sprawled across the floor of the brand new camp director’s cabin, 30 young women reflect on Clukey’s question. Many of them are wearing the official Clukey camp t-shirt, which bears the message “Dream. Achieve. Believe. Succeed.”

We are visiting Julia Clukey’s Camp for Girls at Camp KV (Kennebec Valley) during “Julia Time.” Each morning, Clukey facilitates conversations with every camper about topics such as self-esteem and body image. Today’s topic is a favorite of Clukey’s: goal-setting.

Discussion ensues, and Clukey describes her own goal-setting method. Handing out the bright green journals that the campers are required to write in daily, Clukey asks the girls to think about how they will “start, learn, plan, try, do, and succeed.” Explaining each step, she adds personal anecdotes. “Right now I’m thinking about next year’s winter season, so I’m making sure that my fall training session is in place,” Clukey tells them. Clukey emphasizes the importance of persevering through challenges that may arise at each step along the way. “It’s so true that if at first you don’t succeed, you’ll need to try and try again. That has happened to me a lot in my life.”

Indeed, it took Clukey 12 long years to make the Olympic team. In 1997, a friend persuaded then-12-year-old Clukey to travel to the Olympic luge demonstration in Portland. Their hope was to come away with free t-shirts. Clukey was immediately hooked on the sport, which requires athletes to slide feet first down an icy incline while lying face-up on a narrow sled. Two years later, Clukey was traveling to Europe to train with the Junior World Cup team. By the time Clukey was in high school, she had resolved to do whatever was necessary to reach the highest level of competition. “Training for luge took me away from home six to seven months out of the year. It was hard to stand out that way in high school, but by the time I was a junior I had to let go of those insecurities.”

Harder still was a series of personal setbacks. When she was 19, her father died suddenly of a heart attack, soon after his fifty-first birthday. In 2009, she tore the meniscus in her knee, requiring surgery. That same year, she developed a herniated disc in her neck. Despite this, she competed in the 2010 Winter Olympics in Vancouver, Canada, where she placed seventeenth. Then, just six weeks after Clukey’s Olympic success, her younger sister, Olivia, died of complications from mental illness. Olivia left behind a two-year-old son. “I went from the highest moment of my life to the saddest moment of my life,” says Clukey. “There’s not a day I don’t think of her and the struggles she faced.”

Although Clukey continued to seek success in her sport, she also sought greater balance in her life. That year, she moved back to Maine from where she had been living in Lake Placid, New York, to be closer to her family. Clukey also committed herself to community activities, such as the Maine Beer and Wine Distributors Association’s responsibility campaign. As part of this campaign, she has spoken with more than 12,000 students at more than 40 Maine schools about the importance of making good choices. “You own your own potential,” says Clukey. “If you want to go far in sports or in school, you get to decide your future.”

A longtime camper (Clukey spent many summers at Tanglewood 4-H Camp in Lincolnville), Clukey also recognized the importance of a structured summer experience. In 2012, Julia Clukey’s Camp for Girls opened on the 63-acre site of a former Boy Scout camp in Readfield that had been revived by the Kennebec Valley YMCA for use as Camp KV day camp. Clukey has a special fondness for the area: she graduated from nearby Cony High School in 2003.

For the past two years, Mike Griswold has been Clukey’s camp co-director. A native of Lewiston, Griswold holds a master’s degree in recreation management from the University of New Hampshire. For Griswold, a 10-year residential camp counselor, the camp experience is intensely personal. Diagnosed with a mild form of Tourette Syndrome as a six year old, he worked hard to overcome the physical and verbal tics associated with Tourette. “Camp was a catalyst for my change,” says Griswold. In addition to Griswold, Clukey’s camp has 19 paid staff and three to four volunteers each summer. Clukey’s older sister, Amelia, a teacher at Hall-Dale Middle School in Farmingdale, lends her educational expertise as a camp counselor. Clukey’s mother and nephew (Olivia’s son) also visit regularly.

Personal relationships are important to Clukey. “Julia is amazing,” says Griswold. “By the end of an hour with a group of girls, she will know each of their names.” As part of today’s Julia Time, campers share dreams of becoming everything from a stormchaser to a Broadway performer to a future Olympic athlete. “In what sport?” asks Clukey of the would-be Olympian. “Kayaking,” the young woman replies. Clukey nods her approval.

Clukey also focuses on the short-term goals of each girl. One girl wants to make it to the top of the rock wall that she will be climbing that afternoon; another wants to pass her swim test so that she can go into the deep end of the swimming area with her friends. “You’ll get your chance again soon,” encourages Clukey.

Once Julia Time is over, Clukey rotates around the camp activities. “Brooke, let me tie that strap tighter on your bathing suit,” she motions to a girl who is heading toward the waterfront. Clukey gives another camper a boost up the climbing wall, which has been set up in the upper field. By lunch, Clukey is serving pizza and salad to the girls.

“With other camps I’ve worked at, it’s often girls against boys,” says 18-year-counselor Natalie Corrigan. “I’ve even had girls tell me, ‘We have to beat the boys.’ At Julia’s camp, we want them to know that they can do anything the guys can do, but it is more about them making friends and building self-confidence.”

Corrigan, a native of Oakland, has been at Clukey’s camp since the beginning. Involved with summer camps for 13 years— first as a YMCA camper, then a counselor- in-training—Corrigan transitioned to the camp counselor role in high school. “I was always the kid who had friends from other places,” says Corrigan. “When we played soccer in middle school, I knew other people from different towns, and my teammates were impressed.”

One of Corrigan’s charges, 11-year-old Grace, believes that meeting new friends is one of the best parts of camp. “Some of my friends come back every year,” says Grace, a sixth-grader at Farrington Elementary School in Augusta. Grace is one of 108 girls, grades fourth through eighth, who are enjoying ten days of Clukey’s camp on the shores of Maranacook Lake.

This is the largest group in the camp’s history, and more than half the girls are receiving some form of scholarship assistance. Although most hail from the Kennebec Valley area in central Maine, some travel from as far away as Sanford to experience activities like swimming, kayaking, hiking, nature walks, field sports, arts and crafts, theater, and music. Clukey, 30, is thrilled that her camp is reaching so many young women. “It is amazing to watch their progress in four years. This year we have some kids who are aging out and it has been wonderful to see how far they have come.”

In addition to more standard activities, girls participate in camp assemblies known as LOGS, which are held on log benches near the former Boy Scout camp lean-tos. A line of painted rocks creates a “peace trail” directing visitors toward the site. LOGS stands for “lots of good stuff.” These gatherings give Clukey campers the opportunity to sing, perform skits, and engage in other impromptu activities in front of their peers. “Mike, I have a song for you,” says one camper as we enter the arts and crafts hut behind Griswold. Her fellow campers laugh as she sings and waves her hands in the air. “I hope you’re going to share that at LOGS,” says Mike.

On the final evening of camp each year, families are invited to join in a special version of LOGS, as part of a celebration that also includes a donated barbecue and fireworks. “We want our messages carried home to the families,” says Griswold.

For Clukey, the message is not that a girl is required to become an Olympian, Broadway performer, or stormchaser. Instead, she is asked to keep showing up, and being the best person she can be. This is something Clukey continues to work on herself. It hasn’t been easy: in 2011, she had surgery for an Arnold Chiari malformation, which was causing severe headaches due to the buildup of spinal fluid in her brain. Although she subsequently won two silver medals in the 2013 World Cup competition, she missed qualifying for the 2014 Olympic team by 13 thousands of a second.

Taking her own advice, she plans to try and, if necessary, try again. “I’m firmly committed to my athletic goals in the sport of luge and working hard to put myself in a position to potentially compete in the 2018 Olympics,” say Clukey. She also has an eye toward her non-athletic future. Clukey has finished her coursework at DeVry University, where she is majored in electrical engineering. This fall, she is working to complete her thesis for which she is trying to create a solar battery charger. “Growing up in Maine, it is hard not to be passionate about the earth,” she notes.

Clukey is passionate about everything she does, from luge, to public speaking, to camp leadership. Her enthusiasm is contagious, and infects campers and counselors alike. “Working here definitely influenced my goal of becoming a teacher,” says Corrigan, a 2015 Messalonskee High School graduate who plans to major in elementary education at the University of Maine, Farmington.

For campers, the goals are more immediate: to have fun and make friends. “Every day I tell my parents about all the activities and friends I made,” says Grace. “I can’t wait to go back.”