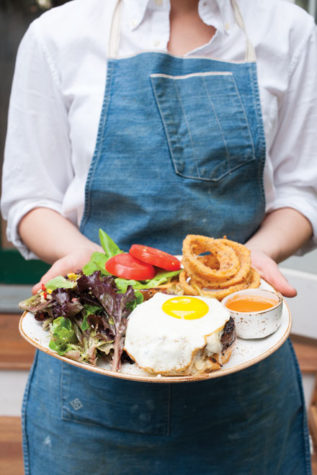 The key to a fantastic burger is simplicity. 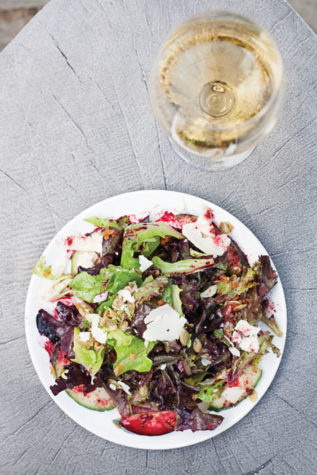 Theres no shortage of the good stuff during summer in Maine. 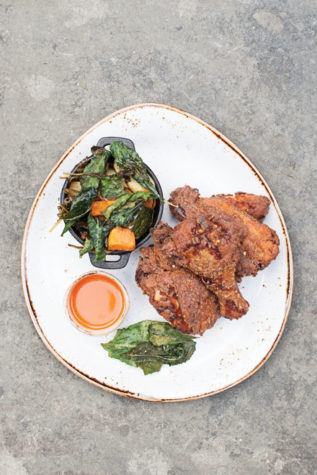 A combination of Caribbean and Southern techniques make for the perfect fried chicken. 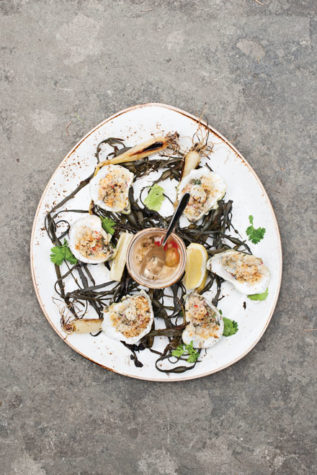 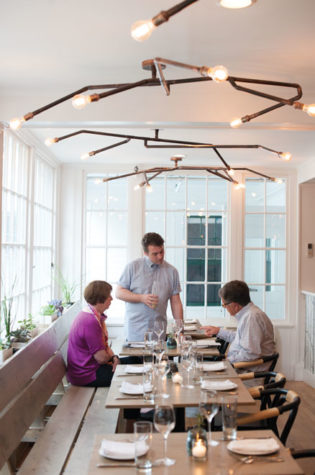 A knowledgeable staff rounds out the dining experience. 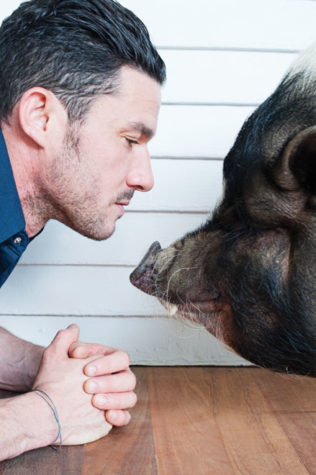 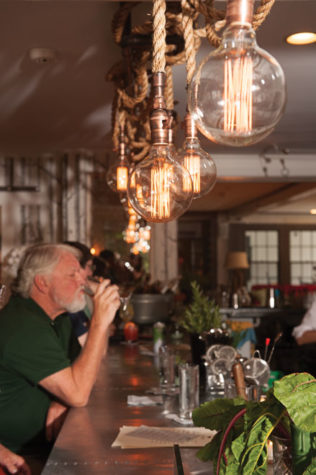 Clever sources of illumination include fixtures attached to heavy cords of rope.

“If there is one thing that is absolutely certain in my life, it’s that I know I make damn good fried chicken.”

After savoring Pig and Poet chef Sam Talbot’s interpretation of the time-honored Southern classic, I am inclined to wholeheartedly agree. Although he grew up in North Carolina, where fried chicken is practically a religion, his method actually finds roots in the Caribbean and was taught to him at 18 years of age by an elderly Jamaican prep cook he worked with at the time. Her recipe involved buttermilk and coconut milk as well as an array of vibrant herbs and spices used in the brining and marinating process, which gives the meat an incredible depth of flavor while retaining moisture. The batter is thick and crunchy while a sweet, sticky glaze of high-quality Maine maple syrup paired with Talbot’s fiery “Poet” sauce ignites the senses and encourages an unrestrained approach to consuming every last bite.
A Caribbean-inspired, Southern classic such as this is an unlikely indulgence to be found, done this well, in Camden, Maine, but Pig and Poet, housed in the newly renovated Whitehall, is anything but conventional. The hotel, built in 1901, was purchased by Lark Hotels and reopened in the spring of 2015. It is furnished and decorated by Maine-based artists and craftspeople, such as Angela Adams, and was designed to retain the charm of the original inn while incorporating a modern interpretation of Camden’s motto, “Where the mountains meet the sea.” The decor of the restaurant is dominated by reclaimed wood; ample amounts of natural light pour in from expansive, multi-paneled picture windows and reflect off of prints of birch trees that line the walls. Running the length of the ceiling is a network of light fixtures built with piping. Heavy cords of rope lights drape over the bar and give the sense of being in the cabin of an old ship. Furthering this notion is an ample supply of rum and citrus (to prevent scurvy, if one were to become stranded at the bar).

In addition to his role as a restaurateur, Talbot is well known for his appearances on Bravo’s Top Chef and for being the author of The Sweet Life: Diabetes without Boundaries, in which he supplies diabetics like himself with recipes that eliminate compromises when it comes to eating well. His longstanding friendship with the chief inspiration officer for Lark Hotels, Dawn Hagin, led to a meeting with the hotel group’s CEO, Rob Blood. Talbot was presented with several opportunities in various locations, but Camden struck a chord with him, chiefly because of the picturesque harbor. “The ocean is my life,” Talbot tells me. “My food is best when I’m happy, and saltwater makes me very, very happy.”

Talbot worked with Hagin to choose a name for the midcoast venture and settled on Pig and Poet, based on his desire to utilize whole animals for his menus as well as the inn’s historical connection to activist and Pulitzer Prize-winning poet Edna St. Vincent Millay, who was first recognized for her literary talent while speaking at the Whitehall in the early twentieth century. Millay began a poem with the phrase, “My candle burns at both ends.” To me there is no more accurate description of the all-consuming life a chef must live in order to be successful.

In addition to the serenity of the surrounding environment, Talbot also fell in love, as so many cooks do, with the overwhelming availability of outstanding ingredients that have become the benchmark of eating in Maine. As with the fried chicken, he seamlessly integrates the food of his childhood—a perfect example being fresh squid that he marinates in olive oil and cooks a la plancha until its exact moment of peak tenderness. A confit of local vegetables, such as fiddleheads and ramps, is served atop the squid with delicate pesto made predominantly with pistachios. The dish comes with a side of cornbread pudding, which Talbot describes as “out of this world,” and goes on to describe the preparation as, “basically very lightly cooked cornbread with cream that has been scented with thyme. Have serious mercy.”

Maître d’ Jacob Cooper, a transplant from Manhattan by way of France by way of Georgia, is among a small contingent of Talbot’s longtime coworkers and friends who have made the journey to the midcoast with him. Cooper’s gregarious nature is a welcome component in the dining room, and while we are conversing about his “assimilation” into coastal Maine after living in the city, a plate of fish tacos makes its way to my table. “These are Chef’s pride and joy,” he tells me. “He has had them on the menu at all of his restaurants thus far, and each time he tweaks them ever so slightly to ensure they are different and even better than the last.” Tonight’s fish is local haddock, lightly breaded and served with crunchy cabbage, charred tomato salsa, pico de gallo, and a velvety crema made from cotija cheese blended with mayo, yogurt, turmeric, and sour cream.

In addition to the traditional comfort foods, Talbot puts a great amount of emphasis on keeping the flavor profile of his menu bright and vibrant, effectively employing a balance of salt and acidity. For example, his oyster ceviche is tossed with a variety of tropical elements, like coconut milk, jalapeño, cilantro, and pineapple salt, and served with rice crackers. According to Talbot, “You can eat your fill and still feel good going out dancing after dinner.” Although the midcoast’s options are currently somewhat limited with regard to dancing, perhaps the availability of such foods will prompt an influx of clubs in the not-too-distant future.

The beverage focus at Pig and Poet is on the diverse cocktail program, which includes the refreshing, gin-based Brother’s Promise as well the Kerouac Road, which contains citrus, Campari, and rye. But the restaurant also boasts a small, concise wine list. It contains quite a few gems, such as the 2013 Domaine Guillemarine Picpoul de Pinet from the Languedoc, a varietal that is described by many as the “muscadet of the south.” It is stunning when paired with a platter of fresh oysters topped with garlic, oregano, spicy pork, and biscuit crumbs before being roasted until bubbly and golden brown.

When I meet with Talbot, I pose the question of whether he might potentially grow a bit restless with the leisurely pace of Camden after a life that has so far been anything but. His response his simple: “Any time I’m not spending in the kitchen or exploring the amazing local farms is spent paddle boarding and getting a lay of the land,” says Talbot. “There is simply no time to be restless here; there are too many lobsters to be tended to and blueberries to be turned into the ultimate baked crisps and cobblers.”

It sounds like the Pig and Poet are both here to stay.